A bystander ran over a machete-wielding refugee this afternoon, ending a rampage that saw a pregnant woman killed and two other injured in Reutlingen in Baden-Württemberg, Germany.

While there are no exact details of motive to the attack yet, pictures uploaded to social media show a young bearded man in the process of being arrested and German police have told media that the perpetrator was a “Syrian refugee” who “acted alone”, reports the Frankfurter Allgemeine Zeitung. The attack is believed to have taken place before 1630 Central European Time.

UPDATE 20:17 GMT – The district of Reutlingen received, to the end of February 2016, around 3,058 migrants who share accommodation. The chart below shows the distribution of nationalities among the most represented countries of origin in the district. 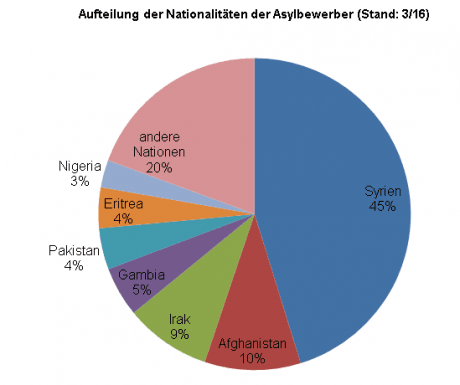 UPDATE 20:15 GMT – Local news sources are now suggesting the woman in question may have been married to the asylum seeker.

The killing started this afternoon in a local “snack-bar” kebab shop according to reports in Sueddeutsche Zeitung after a “dispute” broke out between the perpetrator and others. The paper reports one woman has died, while another woman and a male are injured. Baden-Württemberg told press this afternoon that the man responsible had been arrested, that he was previously known to them, and there was “no evidence of a terrorist attack”.

Remarkably, a German citizen stepped in to help police arrest the machete-wielding killer. An eyewitness told German newspaper Bild: “The perpetrator was completely out of his mind. He ran with his machete even behind a [police] car. A BMW driver gave it some gas and ran him over. Then he lay prostrate and did not move”.

The paper reports the man behind the wheel of the car was the son of the kebab-shop owner, and that by running down the refugee he likely prevented others from being attacked.

The pavement outside the snack-bar was reportedly “covered with blood” after the attack.

The official police statement released this evening said: “Shortly before 16:30 we received several emergency calls at the police headquarters in Reutlingen, that a man had quarreled with a woman in the area of the central bus station and had injured her with a machete. The woman suffered fatal injuries.

“The perpetrator was arrested a few minutes later close to the scene due to the rapid intervention of the police. After the initial fatal attack the perpetrator injured another woman and a man.

“The suspect is a 21-year-old asylum seeker from Syria. He is known to the police. According to current knowledge, he is a lone operator, a threat to the population in and around Reutlingen at present is not likely.

“According to current knowledge there is no evidence of a terrorist attack”.

The attack comes less than 48 hours after an 18-year-old German Muslim killed nine in a shooting rampage at a McDonalds in Munich, Bavaria. Just this morning German media reported “panic” after a 22-year-old pulled a knife on a train on the route between Hamburg and Bremen, and less than a week ago an axe-wielding “refugee” injured four on a train in Wurzburg.

The youth immigrant, who shouted “Allahu Akhbar” as he attacked passengers was shot by German police, as reported by Breitbart London on Monday.