Around 50,000 supporters of Turkey’s Islamist president Recep Tayyip Erdoğan have rallied in Cologne, Germany to demand his authoritarian reign continues.

Members of the Turkish-nationalist, fascist-leaning “Grey Wolves” group were among the crowd that gathered on banks of the Rhine River with the city’s huge gothic cathedral in the background. 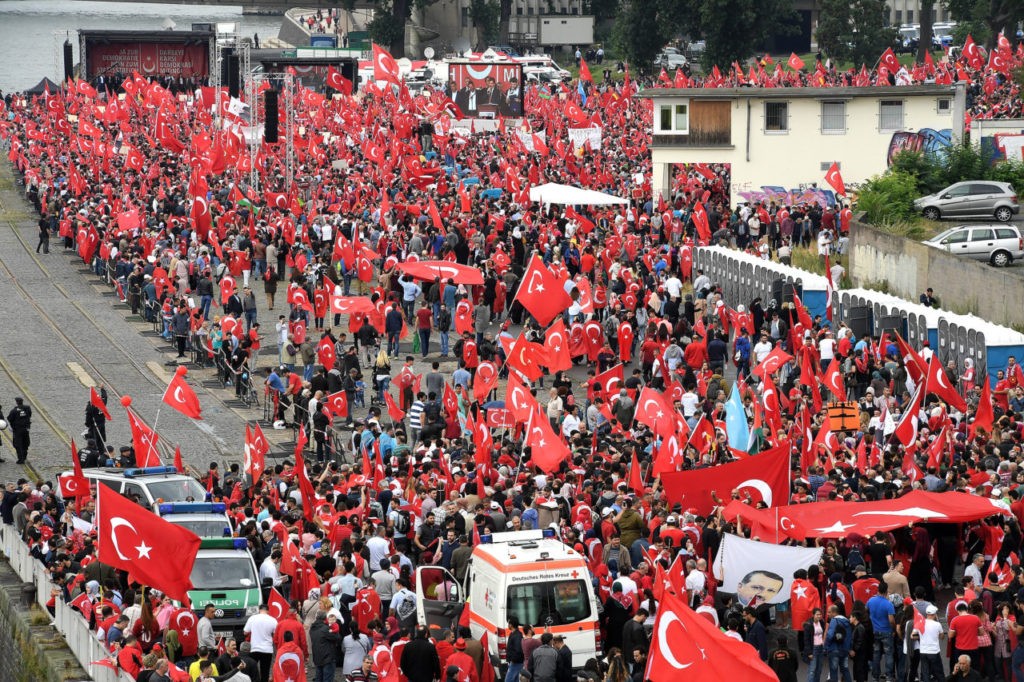 One angry Cologne resident was caught on video insulting the supporters of political Islam, calling them “crazy” and “fascists”.

The security presence at the rally was heavy, with snipers spotted on a rooftop nearby, and bullet-proof cars on standby to evacuate speakers.

However, police insisted all would remain calm. Police Commissioner Jürgen Mathies said: “The police here in Cologne are well prepared.

“I am confident that Cologne will experience a peaceful day, however, I should be quite clear. We will immediately and consistently intervene, if any hint of violence is evident.” 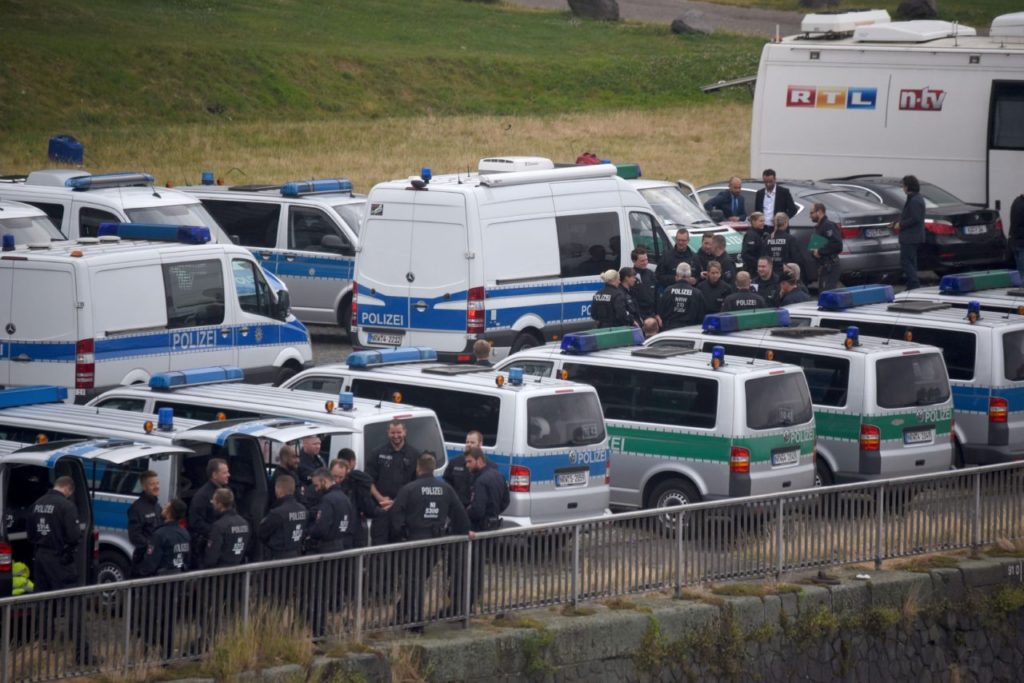 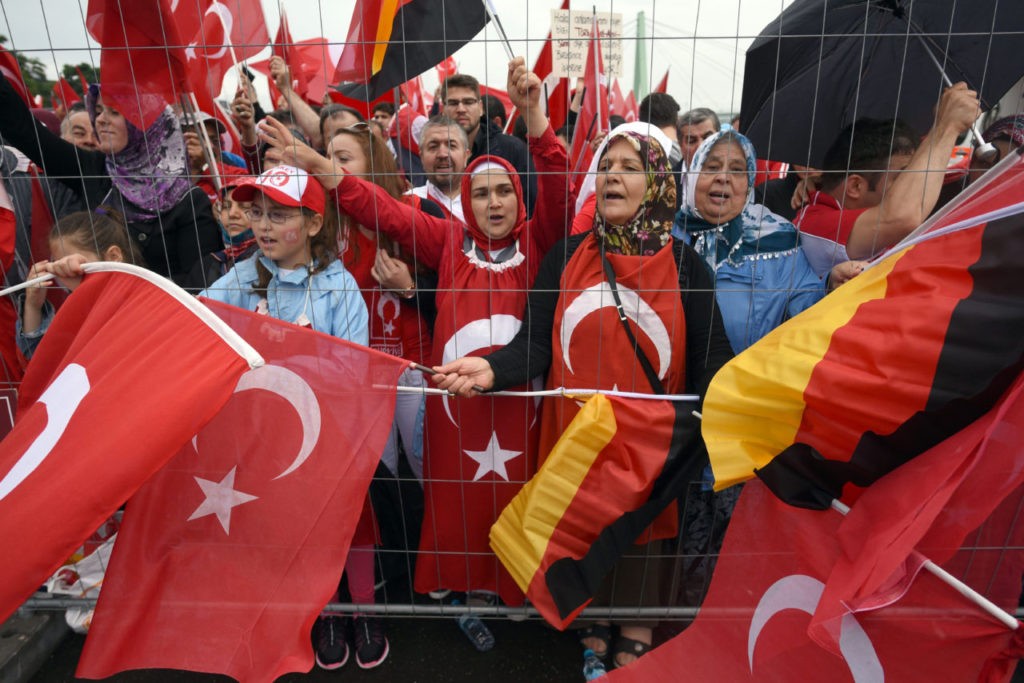 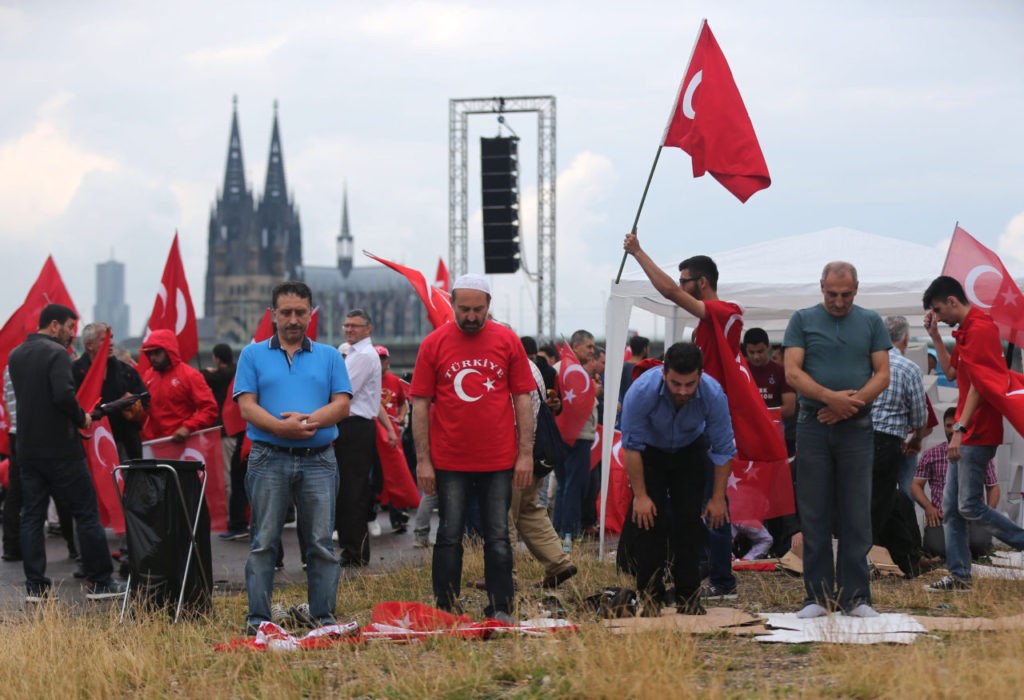 Just weeks ago, on July 15th, the Turkish president survived a coup attempt organised by secular generals in the army who accused him of interfering with the democratic process and Islamising the country.

Mr. Erdoğan has used the aftermath to consolidate his power by arresting and detaining more than 15,000 people and shutting down dozens of media organisations, including 45 newspapers and 16 television stations. Tens of thousands of journalists, university professors, public servants and police members have also been suspended.

Turks form the largest ethnic minority group Germany, with 1.55 million people still holding Turkish citizenship, and the lead up to the even saw skirmishes between backers and opponents of Erdogan in the Western Germany city. 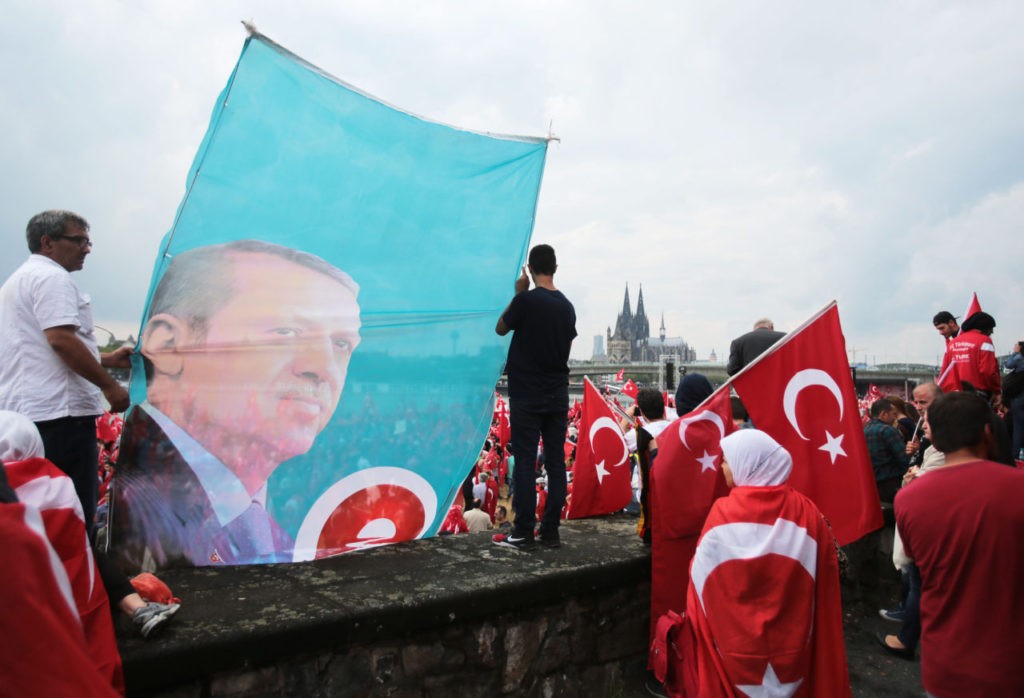 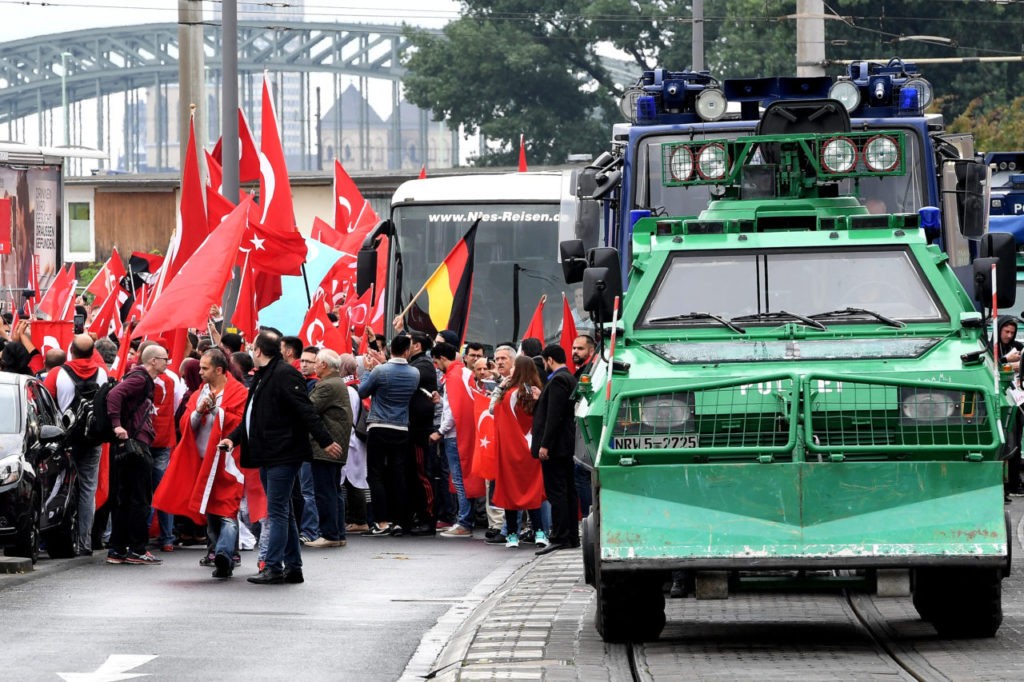 Pro-Erdogan activists stormed locations popular with followers of U.S.-based preacher Fethullah Gulen, whom Ankara accuses of masterminding the putsch, while critics of the Turkish president have also complained of abuse and threats against them on social media.

In the past two weeks, Germany has been rocked by four violent attacks – three of which were committed by migrants, and two had links to Islamic State.

One Syrian “refugee” hacked a pregnant woman to death on the street. Another Syrian, who came from Bulgaria, blew himself up outside a music festival injuring 15, and a “refugee” attacked multiple people on a train just over a week ago. 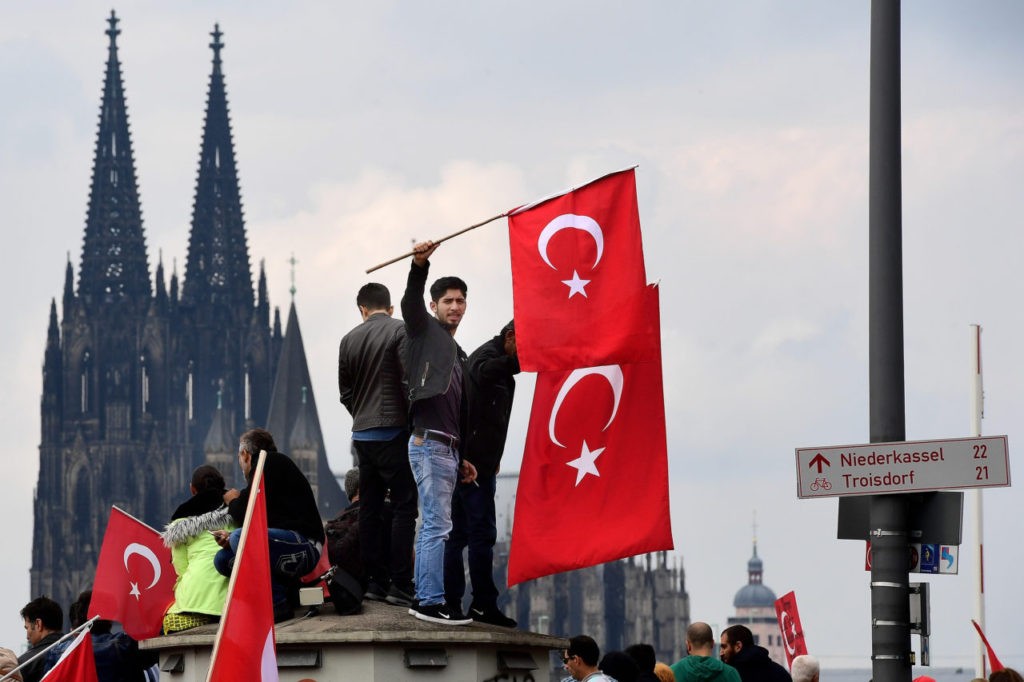 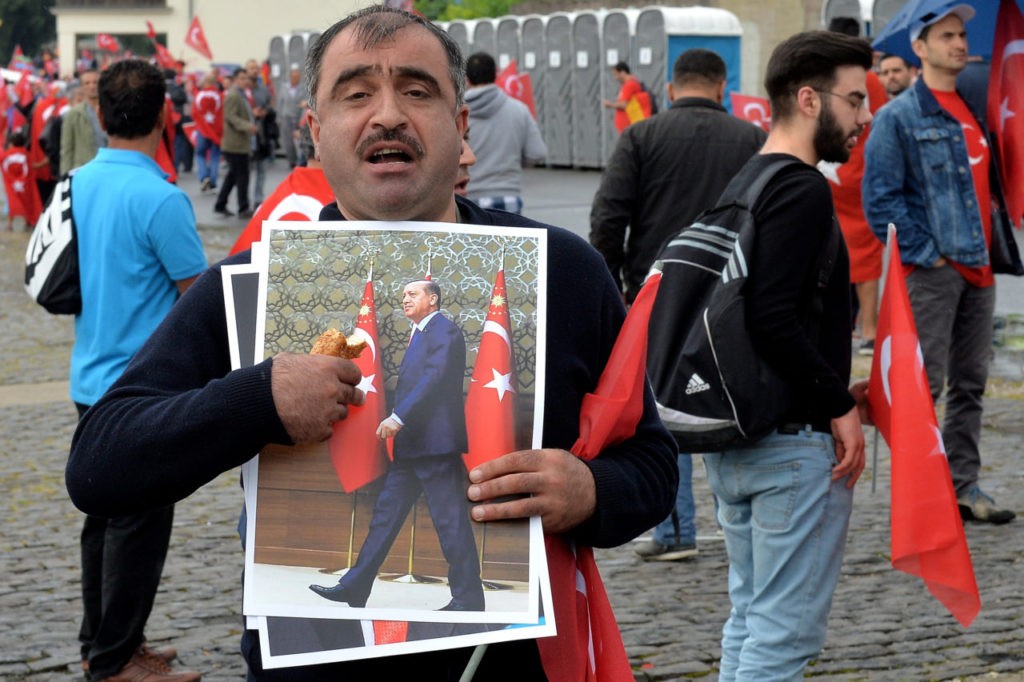