Some tourists fled Prague’s Old Town when what appeared to be armed jihadis wielding ISIS flags in a Hummer, and astride a camel, entered a square popular with tourists on Sunday shouting “Allahu akhbar”.

The men, clad in military and Islamic garb, announced an Islamic takeover. Led by anti-Islamification campaigner and renowned entomologist Martin Konvička, the stunt intended to draw attention to Islam’s growing presence and influence in the Czech Republic, and Europe more widely.

Konvička rode into the Old Town Square on the back of a camel accompanied by a veiled woman and was met with imitation gunshots and shouts of “Allahu akhbar” from supporters riding in a nearby Hummer. 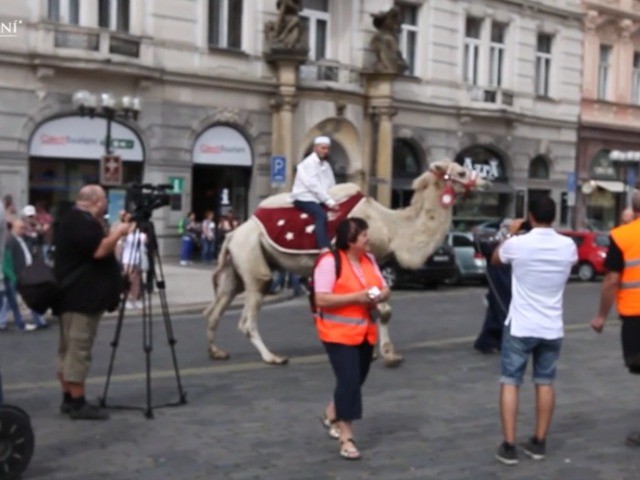 In his jihadi disguise, Konvička announced his plans for an Islamic Czech Republic.
The campaigner declared that women would be flogged and stoned, universities closed and books burned. 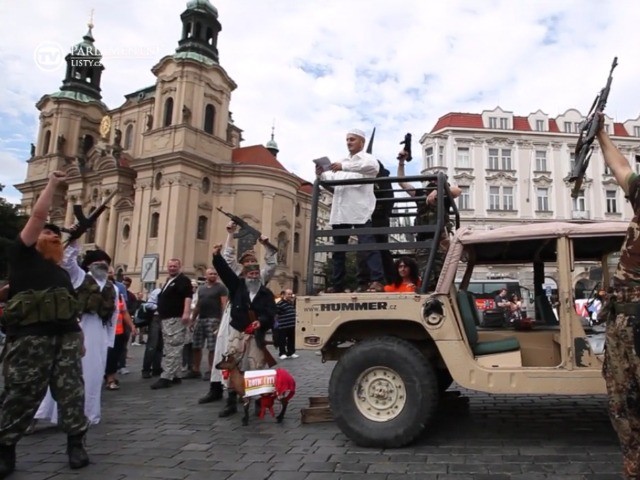 Several tourists in the surrounding area who heard the faux gunshots reportedly fled Prague’s Old Town. Panic wasn’t widespread however as most spectators watched the performance with interest, many recording the scenes with their mobile phones.

Police had given the go-ahead to the anti-ISIS stunt, complete with the use of imitation firearms but detained Mr Konvička for a short time for questioning afterwards.

Police spokesman Tomáš Hulan reported: “The performance started around 2pm. Around 15 minutes later, the imitation gunshots began to sound. This caused a panic on Old Town Square, because many people did not know what was going on, and thought a real terrorist shooting was taking place. Some then tried to flee the scene or to seek cover.”

Mr Konvička, whose research into butterflies is widely-published, campaigns against growing Islamic influence in the Czech Republic and Europe. The trained zoologist warns that mass Muslim migration has caused terror attacks in nations like France and Belgium.

Konvička is hoping his anti-Islamism platform will make political inroads in the 2017 European Parliament elections.

Inspired by the populist Alternative for Germany in the Czech Republic’s neighbouring country, the party being formed by Mr Konvička has been endorsed by past president Vaclav Klaus. A staunch Euroskeptic, Mr Klaus is a committed campaigner against global warming alarmism and has many fans on the European and American right.

After the event, Mr Konvička stated it had sought to shock, as a portrayal of the start of a totalitarian takeover. The date of the group’s display marked the anniversary of the 1968 Soviet invasion of Czechoslovakia.

Konvička, who is also an accomplished translator, expressed disappointment that the group was unable to stage the entire performance. It was set to also feature a faux “beheading” of the Republic’s president Milos Zeman for his opposition to ISIS.