Well over a quarter of births in England and Wales over the past year were to women born outside the UK — the highest level on record — whilst births to UK-born women fell by 0.4 per cent.

New figures released by the Office for National Statistics (ONS) today revealed that 27.5 per cent of babies born in the UK over the past twelve moths were to foreigners.

For the first time, Poland was the most common country of birth for mothers born outside the UK, followed by Pakistan and India.

In contrast to women, however, Pakistani men seem to be fathering more children than their Christian, Polish counterparts. Pakistan remained the most common country of birth for fathers born outside the UK, followed by Poland and then India. 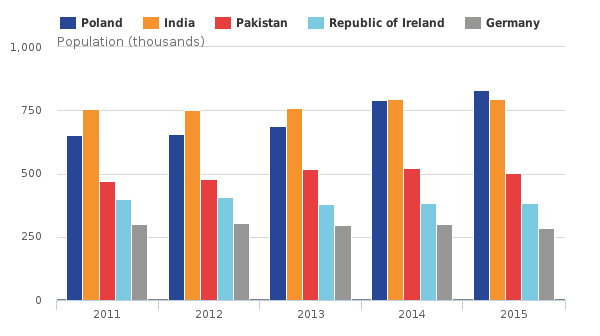 ONS statistician Elizabeth McLaren said: “The rising percentage of births to women born outside the UK is largely due to foreign-born women making up an increasing share of the female population of childbearing age in England and Wales.

“Part of the reason for this is that migrants are more likely to be working-age adults rather than children or older people. Alongside their increasing share of the population, higher fertility among women born outside the UK has also had an impact.”

Approximately two-thirds (5.4 million) of the non-UK born population were born outside of the EU.

Furthermore, one in twelve of the population (5.6 million) retains a non-British nationality. This represents more than a 6 per cent increase since 2004.