Migrants in Lesbos, Greece have fought running battles and burnt down the island’s largest camp, leaving thousands homeless after they were forced to flee.

Shamshaid Jutt, a Pakistani migrant staying at the camp, told France24 that the fire started after “a brawl involving Syrians, Afghans, and African migrants”.

Meanwhile, a Greek police source said there was “no doubt” that the fire had been started on purpose by those inside and that “between 3,000 and 4,000 migrants fled the camp” to the surrounding fields.

Big fire in #Moria #DetentionCenter the life of 4000 #refugees in denger. #antireport pic.twitter.com/1Fk0ptg49h

Ten fire trucks carrying 30 firefighters rushed to tackle the blaze but were hampered by strong winds which fanned the flames.

No casualties were reported by police sources, but tents at the Moria camp were “almost entirely destroyed” and health and registration services were left severely damaged.

The Greek island sits just 12.5 miles off of the Turkish coast, and it has become the main destination for over a million people who made it to Greece’s eastern islands from Turkey since early 2015. Currently, some 5,400 migrants are living there. 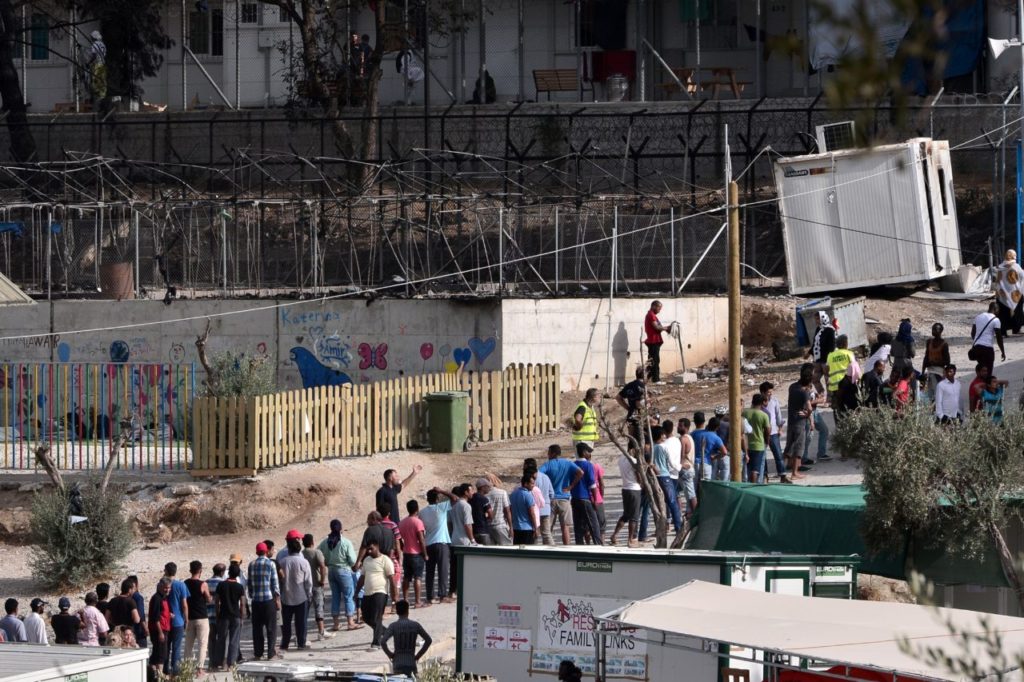 Migrants queue next to burned tents at the Moria camp on the Greek island of Lesbos, following the overnight fire on September 20, 2016. (LOUISA GOULIAMAKI/AFP/Getty)

Following the chaos, officials on the otherwise small and previously peaceful Island are now calling for migrants to be evicted immediately over complaints that they have ruined the area.

“Residents are complaining refugees have converted the beach and the palm tree forest into a wasteland,” Evangelos Violatzsis, the president of the nearby village of Panagiouda, told MailOnline.

“They are also concerned about possible damage to buildings and petty thefts. We demand the immediate decongestion of Moria and Kara Tepe [a nearby village]”, he added.

‼️ #Greece: Revolting invaders (Refugees) on the streets of #Lesbos and they shout: “Jihad, Jihad”. Are you ready? pic.twitter.com/t7ogJ0hMXo

Many of the migrants will now be moved to a ship, which will be moored in the port and will arrive on Wednesday.

Greece’s Shipping Minister, Thodoris Dristas, said: “The ship will have a capacity of over 1,000 and it will be used as a hostel in order to ease the situation after yesterday’s incident.”

Nikos Trakellis, the village president, said: “We have had enough. Nothing – except for a police presence – has been done. Everything is in chaos.

“The sewage has ended up in the river once again. The camp can host 800 people and it has 3,000. Over 4,000 migrants evacuated from camp in Greece after the fire.”

Just four months ago, at the same Moria champ on Lesbos, migrants rioted, threw stones and set fires. Large sections of the of centre were damaged and several people were injured.