Soros-backed globalist activist group Avaaz attracted fewer than a dozen people to their anti-Brexit, anti-Trump, Get Out The Vote protest in London on Thursday.

Aimed at American expatriates living in the capital, the event, advertised in a press release as “America, Don’t Get Brexited: Vote!”, was organised by Avaaz. A registered U.S. charity, Avaaz is one of the world’s largest and most powerful activist groups and linked to globalist billionaire George Soros.

The press release promised face painting, flags, and a chance to talk to young, British citizens who didn’t vote in the UK-EU referendum and who are now suffering from “Brexit regret”.

The intention of the anti-populist group was to encourage American expats to vote – or else risk “getting Brexited”.

Meanwhile in Parliament Square: a handful of Soros-linked activists urge Americans not to vote Trump while CNN films intently 🙄🙄🙄 pic.twitter.com/oNGLzyMgLq

The protest came on the same day as the High Court ruling which insists Prime Minister Theresa May cannot use the Royal prerogative to invoke Article 50 and begin leaving the EU without the consent of Parliament. 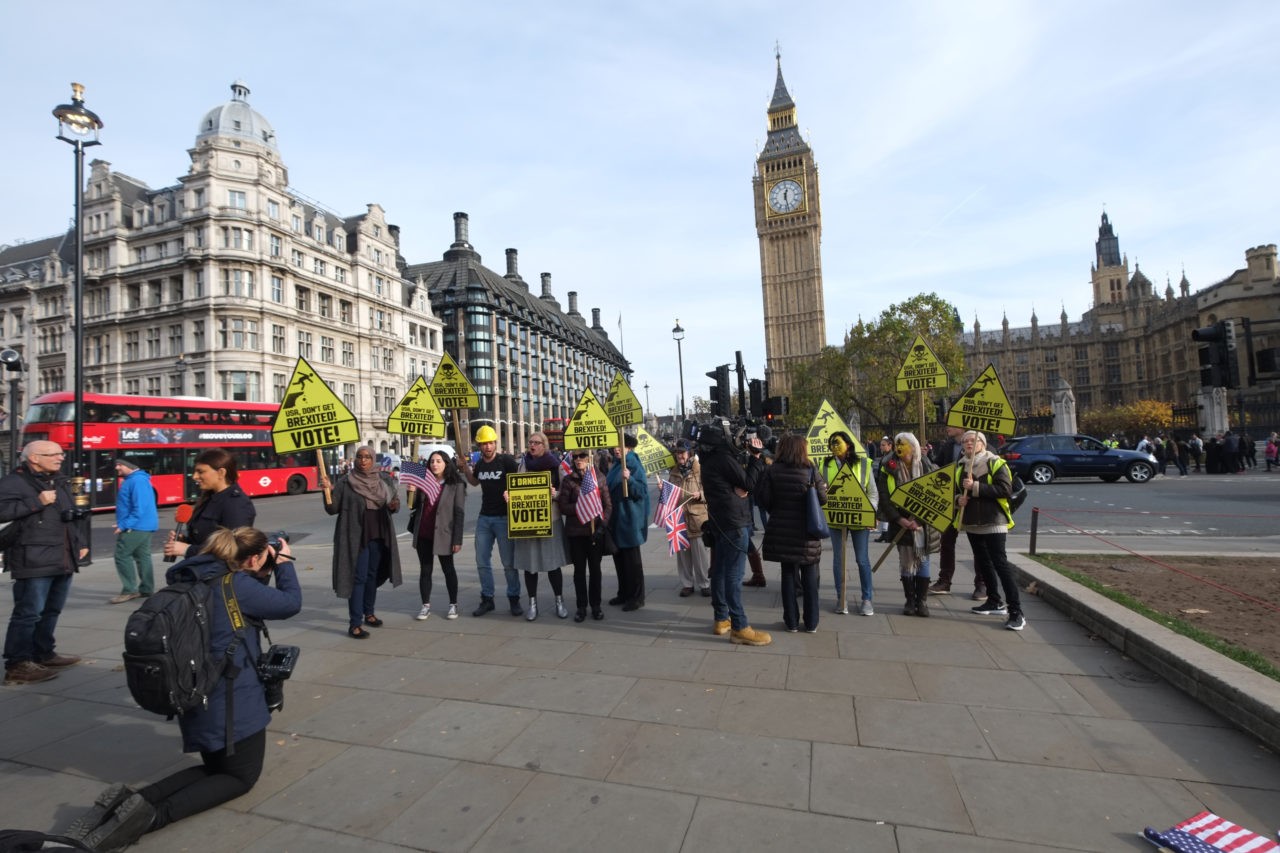 “With the US election just days away, people who regret not voting in the EU referendum will gather in Parliament Square to warn US citizens to vote rather than allow other people decide their fate.

“Ahead of the referendum, many British people expected Remain to win, so didn’t go to the polls. Many young people, especially, felt that their older, more Eurosceptic counterparts had decided their future for them.

“Millennials now make up close to a third of the US electorate, and in the last presidential election less than half of them voted. Avaaz members are encouraging them to have their say.” 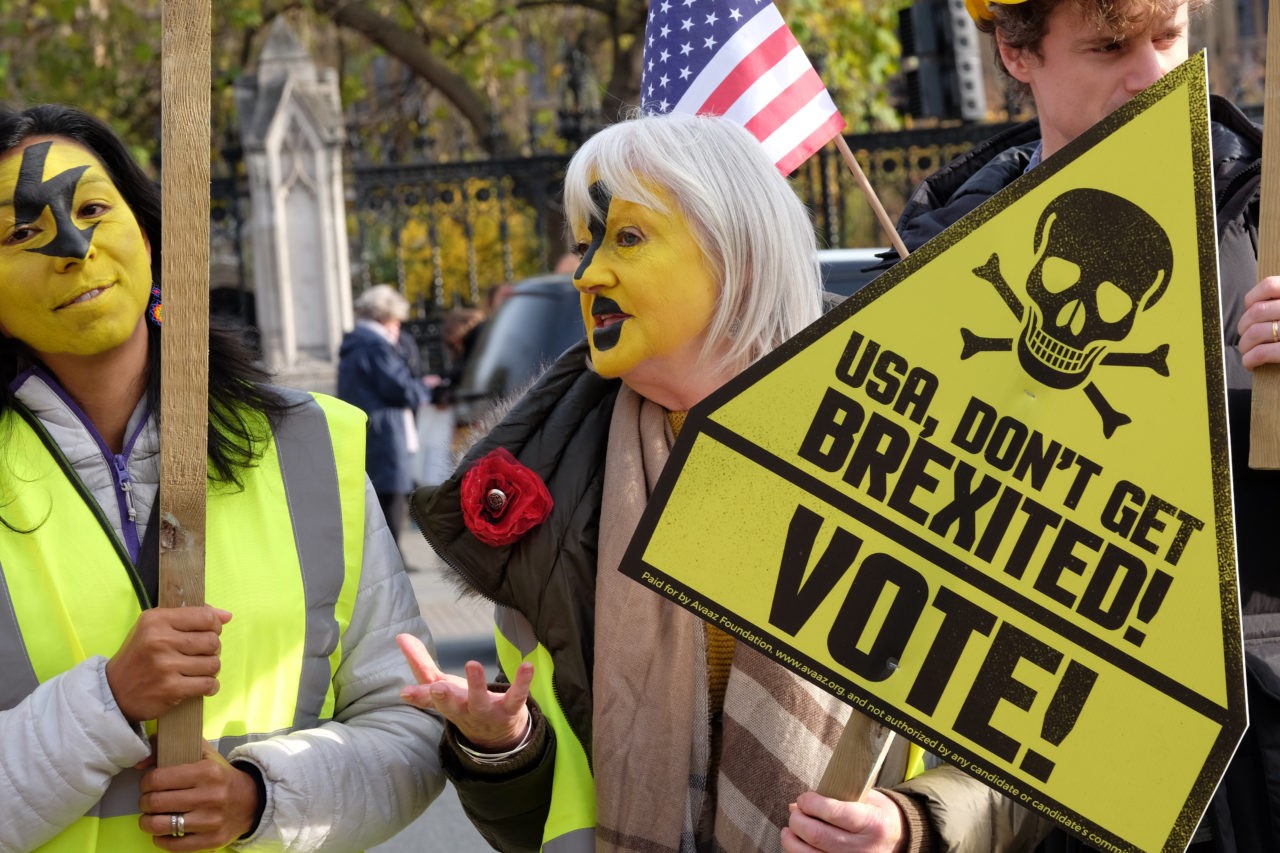 Avaaz’s previous intervention in the American democratic process in the capital came in September, when the group drove a so-called “battle bus” through London to “stop Trump”.

Breitbart London spoke to the Campaigns Director for Avaaz, Meredith Alexander, ahead of the launch of the bus tour.

“Avaaz has created the world’s first, global, citizen’s get-out-the-vote drive”, Ms. Alexander said. “The more people that share it on Facebook, the more Americans abroad will see it, and the more we will be able to stop the global threat of Trump”.

The Avaaz director equated the populist support of Trump with the British vote to leave the EU. “Avaaz is just as strongly in support of trying to stop Brexit as we are of trying to stop Trump” and said that it is “part of the same challenge” of suppressing populist, anti-globalist movements. 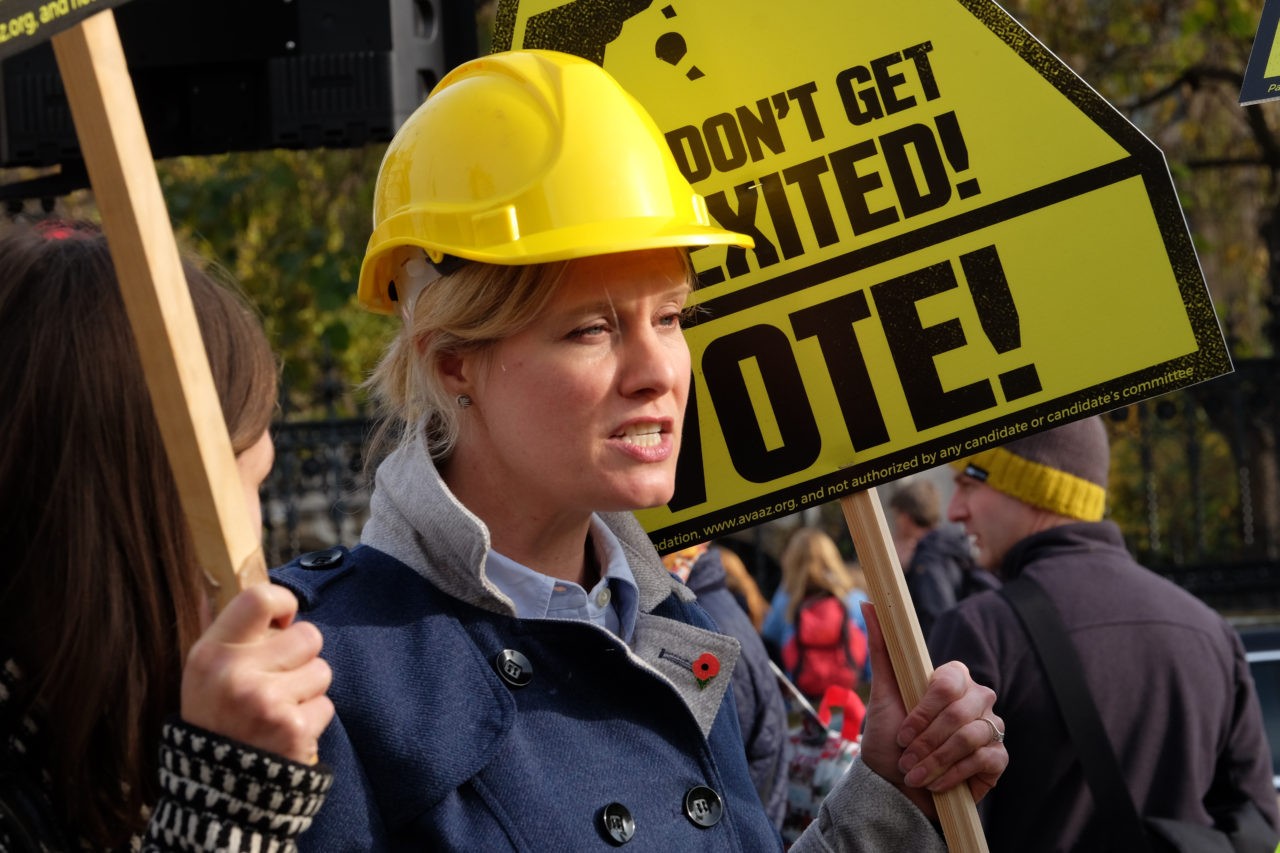 Even less impressive in scale to Avaaz’s “Stop Trump” bus tour, where media and Avaaz organisers outnumbered supporters two to one, fewer than a dozen non-Avaaz personnel appeared at the event on Thursday afternoon.

Other leftist, globalist groups across Europe have also been attempting to influence the U.S. presidential election by targeting America’s overseas voters.

In Denmark, a socialist political party commissioned busses plastered with huge pictures of Donald Trump’s face, with the rear wheels of the vehicle transformed into spinning “googly eyes”, to drive around the capital, Copenhagen, with the banner: “Americans Abroad: Vote”.

The U.S. Department of Defense was also found to be sponsoring articles urging Americans abroad to vote in the presidential election on an English-language European news website which was simultaneously running articles by a Democrat Party activist instructing the same ex-pats to “vote for Hillary Clinton in November” to help “stop Trump”. 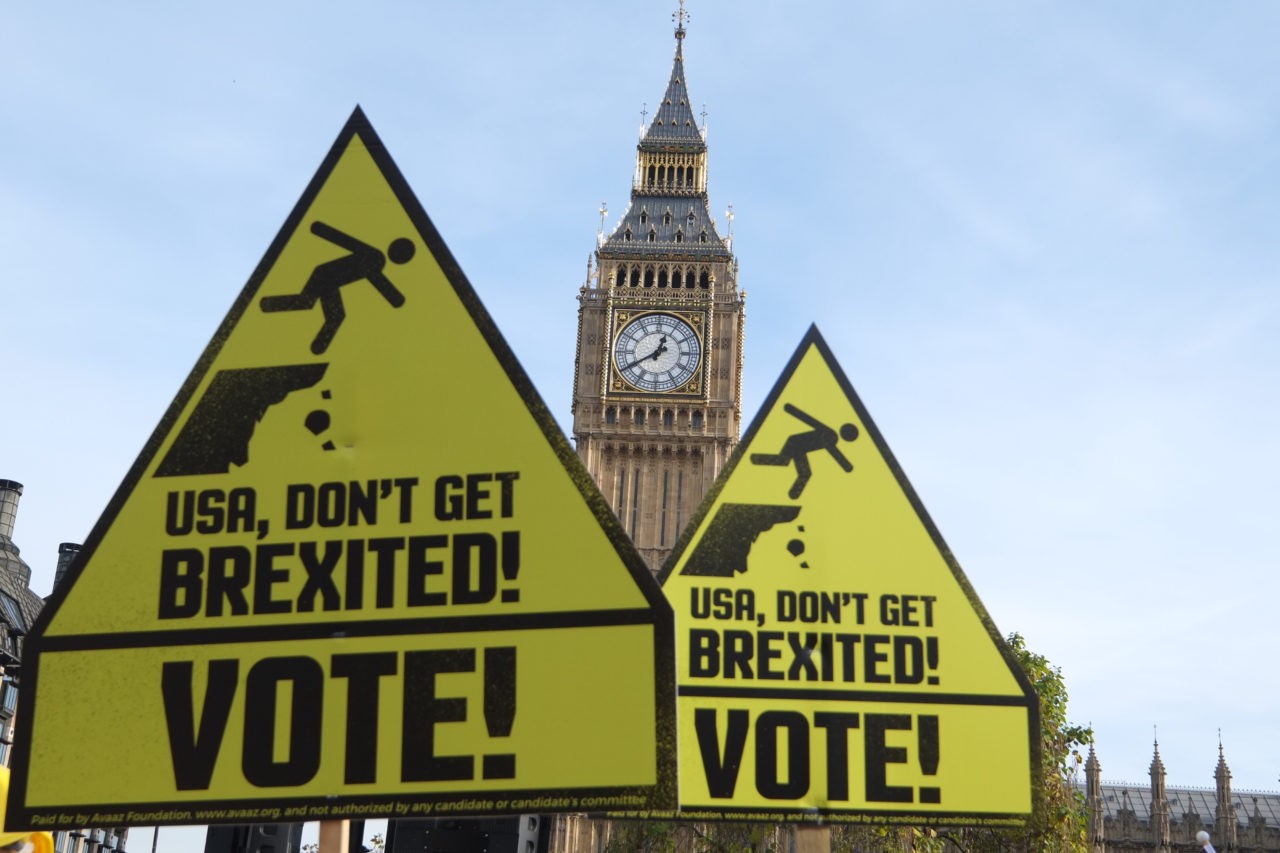 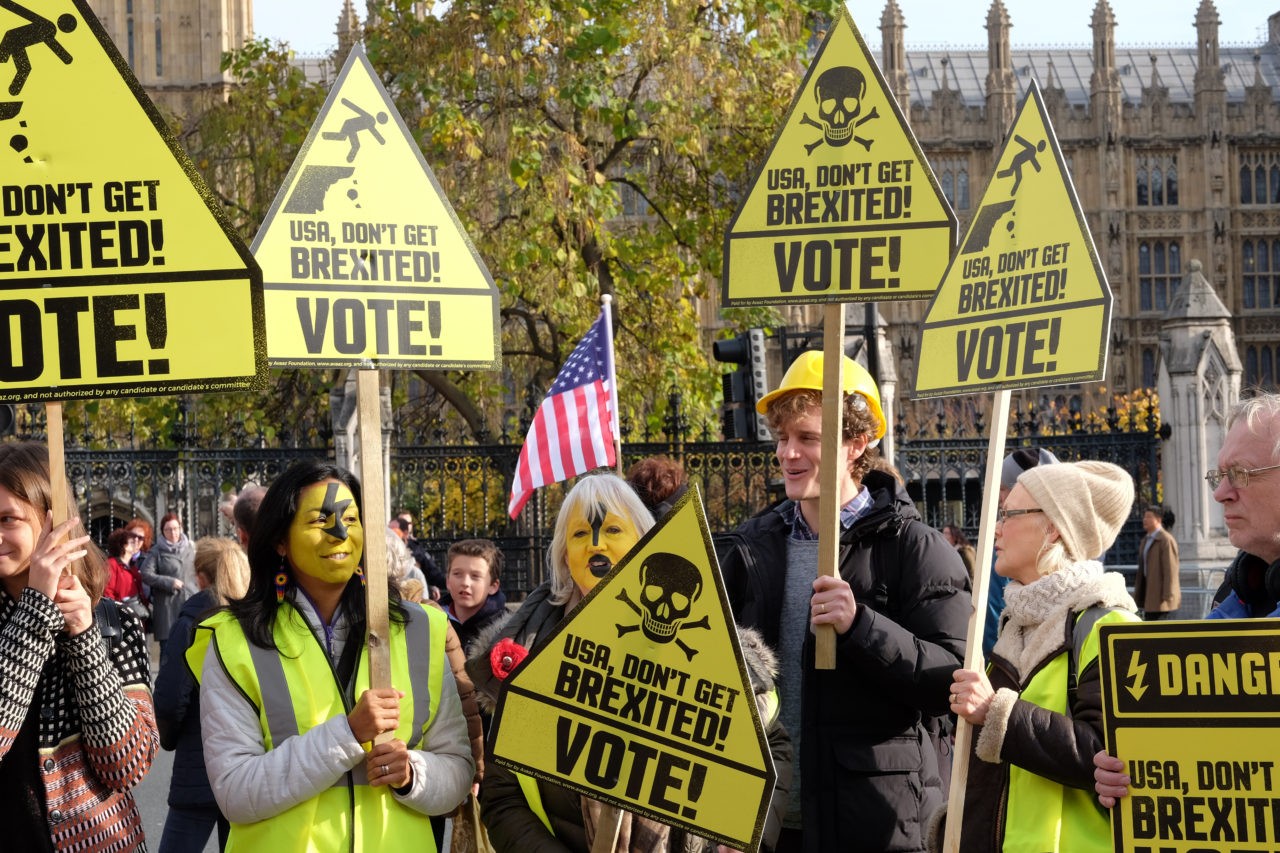 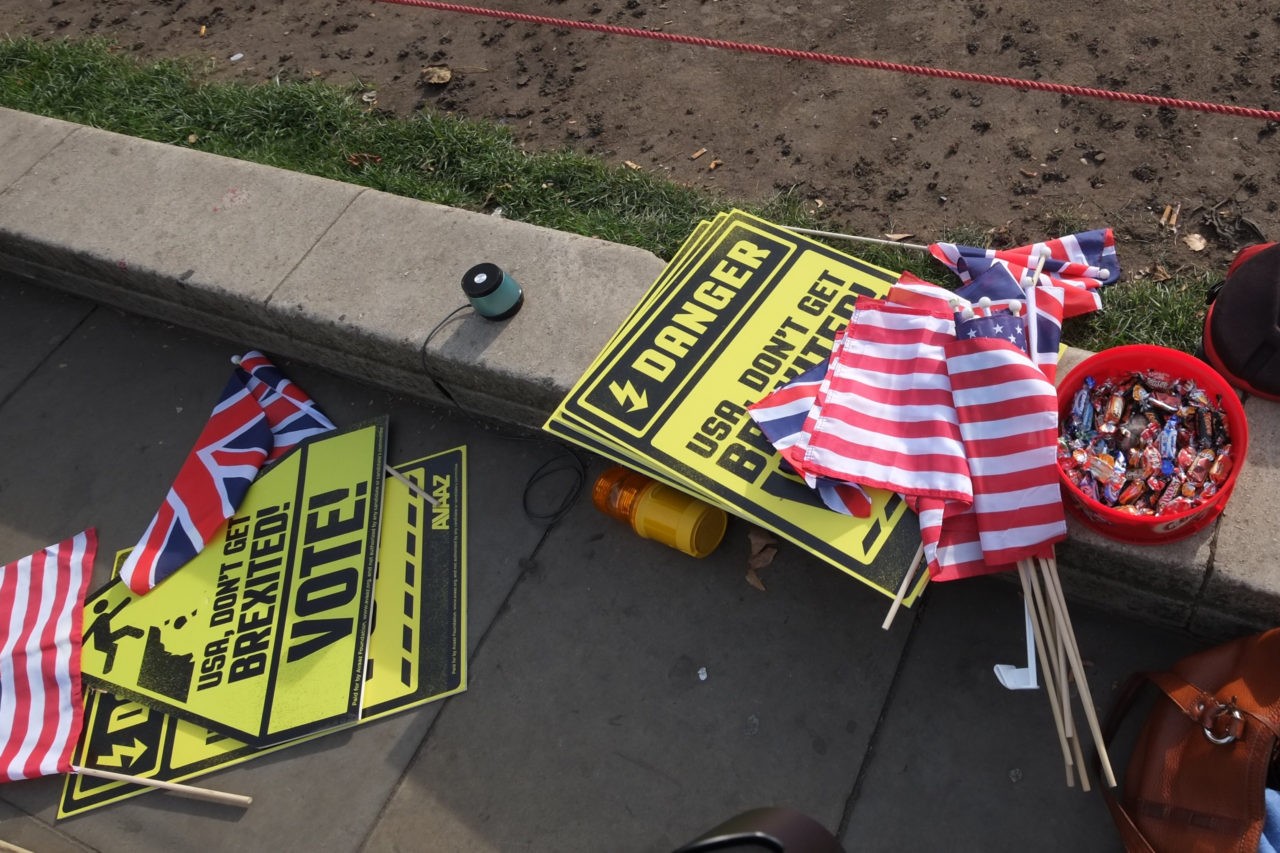