Analysis of the demographic makeup of constituencies suggests that anti-Brexit parties could win 150 fewer seats than pro-Leave parties in a general election.

Chris Hanretty, a political scientist at the University of East Anglia, estimates that had the European Union (EU) referendum been carried out on a constituency level, then the Leave campaign would have won in 401 of 632 constituencies in England, Wales, and Scotland, reports The Telegraph.

Assuming that all 18 Northern Irish constituencies had voted to remain in the EU, the Remain campaign would still have a total of 249 seats – 152 fewer than Leave. 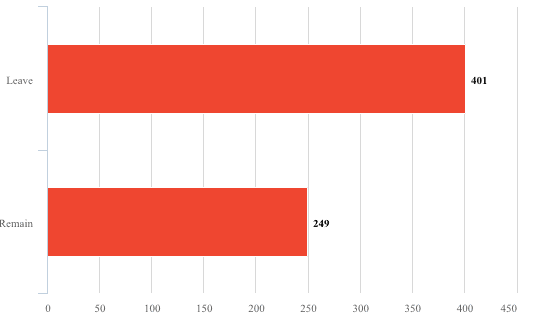 A Leave victory was delivered by a 4 per cent margin over Remain. However, when taking into account the demographics of Britain’s parliamentary constituencies, Leave would gain a larger share of parliamentary seats. According to the modeling and under these conditions, Leave could take 62 per cent of seats in a general election.

In the same way that UKIP’s 3.9 million votes nationwide in 2015 resulted in just one parliamentary seat, 16.1 million Remain votes would not translate into a general election victory for a party that supports remaining in the EU.

In England, a Remain party would only secure 162 out of 533 seats based on the results of the EU referendum, whilst in Wales it would win 11 of 40.  Scotland’s vote would result in a Remain win in 58 0f 59 of its constituencies, with only Banff and Buchan voting to leave. 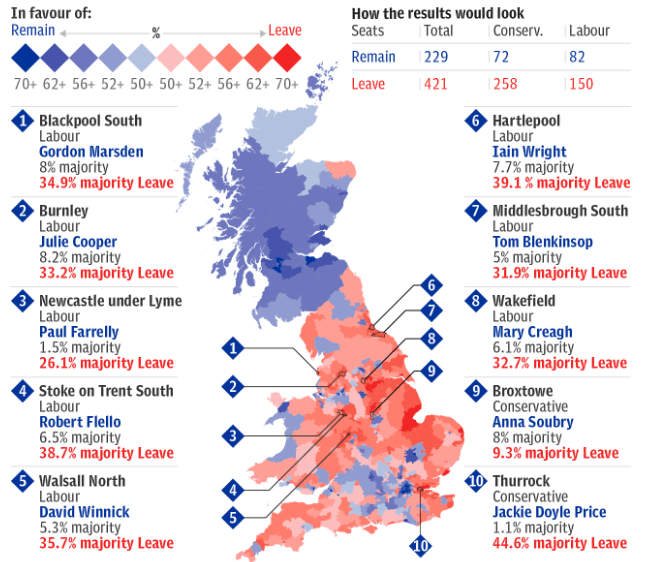 Dr. Hanretty based his modeling on the Leave vote share in local authority areas projected onto parliamentary constituencies, and the figures are based on revised estimates (original estimates immediately following the referendum putting Leave in mainland Britain at 421, Remain at 229).

On Friday, the High Court ruled that Prime Minister Theresa May does not have the authority to use the Royal Prerogative to invoke the EU divorce process, and must ask parliament to invoke Article 50; subsequently, there has been discussion of an early general election.