Downing Street staffers used their Twitter accounts to denigrate Donald Trump and promote Hillary Clinton during the race for the White House, with a key aide using the platform to say he didn’t want anyone “reaching out” to Trump, Breitbart London can reveal.

The British government has been left scrambling to forge links with Mr Trump’s team following his historic victory in the Presidential election on Tuesday, with Downing Street being forced to deny that they were having to rely on UK Independence Party leader Nigel Farage to broker introductions.

But the government’s complacency may be due to Prime Minister Theresa May’s co-Chief of Staff, Nick Timothy, who last May used his Twitter account to announce: “I don’t want any “reaching out” to Trump.” The comment was made while Mrs. May was still Home Secretary, with Mr. Timothy working as her policy advisor.

Urgh, @jameskirkup, as a Tory I don’t want any “reaching out” to Trump. https://t.co/bYq3uWmyql

The comment was attached to an article warning that the Conservatives did indeed need to reach out to the Republican candidate, arguing “No sensible foreign policy is built on the assumption that an election result is a foregone conclusion – especially since Mr Trump is so good at confounding assumptions.”

Mr. Timothy has been described as the Prime Minister’s “political brain”, with one insider telling the Spectator earlier this year that “Nick seems to influence what she thinks to an almost scary extent”.

Timothy also used his account to promote Trump’s rival Hillary Clinton, going so far as to retweet one of her attacks on Donald Trump’s temperament. Another retweet from a reporter featured a Clinton attack ad. 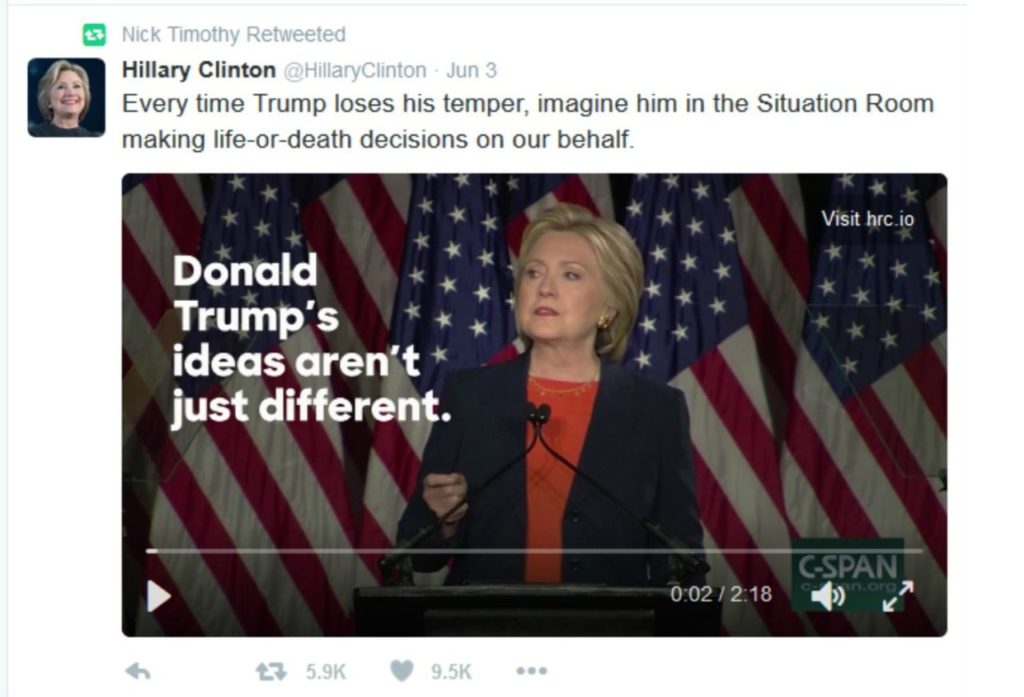 Mr. Timothy is not the only Downing Street insider to have publicly ridiculed Trump on Twitter.

Fiona Hill, the Prime Minister’s other chief of staff, tweeted “Trump’s a chump” last year, while the leader of the Scottish Conservatives Ruth Davidson called the President-elect a “clay-brained guts, knotty-pated fool”.

Alex Burghart, formerly of the Policy Exchange think tank and now one of the Prime Minister’s top staff, once called Trump’s endorsement the “kiss of death”, while his colleague James Johnson, also in Mrs. May’s team, was highly critical of Trump throughout the primary season and during the Presidential race.

How to make the worst flu I’ve had even worse? Waking up to 3 trump victories

Wow. Cruz should jump on this with all his might. https://t.co/38xnJMAe5M

Proud of British response to @realDonaldTrump . Reminds me of Olympics humiliation of Mitt Romney by Boris and DC

In June, Mr. Johnson shared a tweet, commenting “worth a read”, which described a Trump rally as “horrifying”, like a “security state”, and akin to “Nuremburg”.  Trump supporters meanwhile were described as violent “people who never learned to love”, while one is claimed to have done a “war dance”.

Mrs. May was the tenth national leader to speak to Mr Trump following the announcement of his victory this week. The pair discussed strengthening the special relationship between America and Britain, with Mr Trump said to be keen to foster a relationship similar to the one enjoyed by Margaret Thatcher and Ronald Reagan in the 1980s.

On Thursday Chancellor of the Exchequer Philip Hammond denied that their failure to speak sooner showed that Mrs May had been snubbed, saying the delay in talks was because the pair had no “urgent business that we need to transact”.

He added: “Obviously, in due course the Prime Minister will be looking forward to meeting Mr Trump once he is inaugurated as the President.

“I expect that the very strong and close relationship that always develops between a UK prime minister and US president will develop between those two.”