Small groups of protestors have gathered at locations across Britain to mark their opposition to the inauguration of Donald Trump as the 45th President of the United States of America, which took place in Washington D.C. Friday.

Breitbart London was on hand in London as small bands of protestors dropped banners from landmark bridges to mark their opposition to Trump’s inauguration. But similar events have been taking place across Britain. 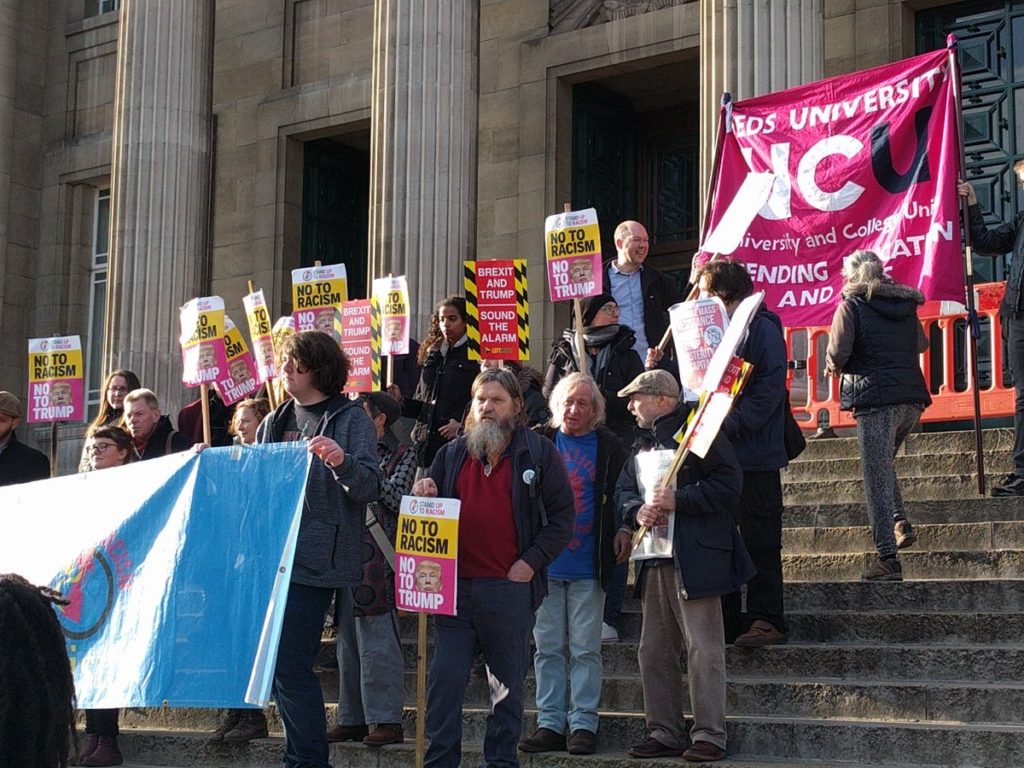 Leeds Stand Up To Racism gathered at the university.   Twitter / @Leedsucu

Speaking to the Yorkshire Evening Post, Steve Johnson, treasurer of Leeds Stand up to Racism said they had called the protest “mainly because of the appalling attitude Trump has towards migrants and Muslims, and over the question of race. Obviously it’s inauguration day.”

The protest was taking place at the university, he said, because “there are literally thousands of students from overseas, thousands of Muslim students here, thousands of black students, as well as lots and lots of staff who are threatened by the ideas that Trump holds. 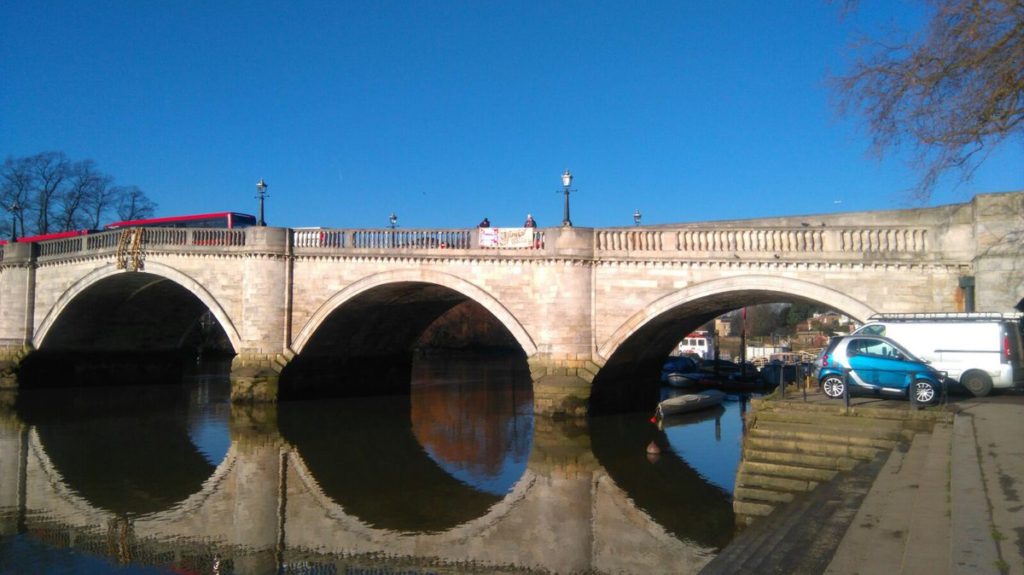 “Trump’s inauguration has basically jacked up the whole issue of racism in society, and I think we have to oppose it,” Johnson said, adding: “There’s all the historic links between Britain and America, so I think we’re duty bound to protest.”

Similarly, urging people to attend their protest, Leeds TUC stated on their Facebook page: “Socialist Alternative in the US have initiated the call for a national shut down on January 20, the day of Trump’s inauguration. We will protest in solidarity with the workers, young people, Black Lives Matter activists, trade unionists, LGBT people, abortion rights defenders and all of those in the US and across the world who reject Trump and want to build a new party of the 99 per cent to fight austerity and capitalism. Join us!” 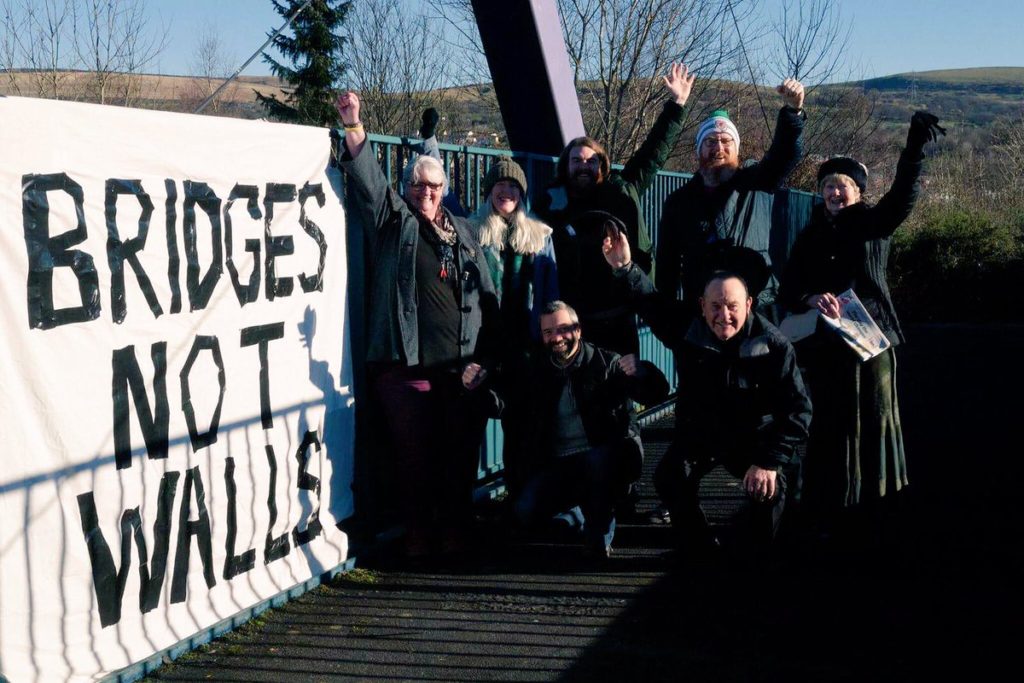 A group with their banner in Merthyr, Wales   Twitter / @hopenothate

Meanwhile, in Wales, a 16ft banner has been unfurled at the Dyfi Bridge, near Machynlleth in Powys by Mid Wales Refugee Action. A spokesman for the group said: “We want 2017 to be a year of building bridges not walls, for a world that is peaceful, just and free of oppression,” the BBC has reported.

Banner drops are also planned in Bangor in Gwynedd, Llanidloes in Powys, and Lampeter in Ceredigion, among other spots across the country, while Cardiff Hope Not Hate has organised a demonstration in the city centre. 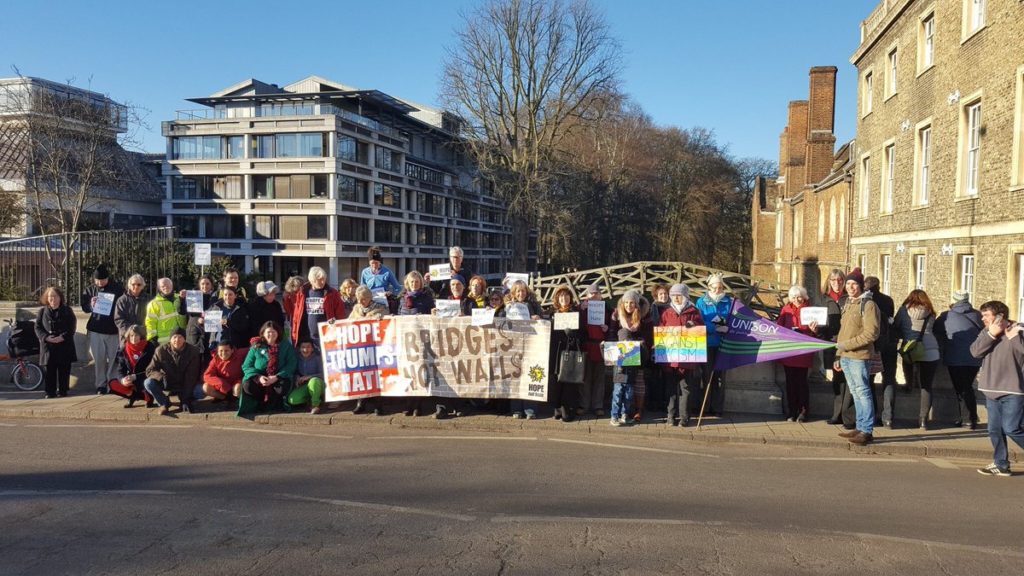 Cambridge Protesters, with the Mathematical Bridge behind.   Twitter / @hopenothate

And in Cambridge, Hope Not Hate joined forces with local trade unions, university staff and human rights organisations to congregate at the Mathematical Bridge at Queen’s College under the banner “bridges not walls”.

Event organiser Elisabeth Pop told Cambridge News: “The message is simple, we’re asking people to join us to build bridges for a peaceful and just world, a world rid of hatred and oppression.

“At a time of increasing division, with some politicians seeking to continually divide communities and exploit tensions, we feel the blame game is no way to resolve issues

“If we want any decent kind of future for our communities, we need to reject those who call on us to build walls between us, and instead begin to build bridges.” 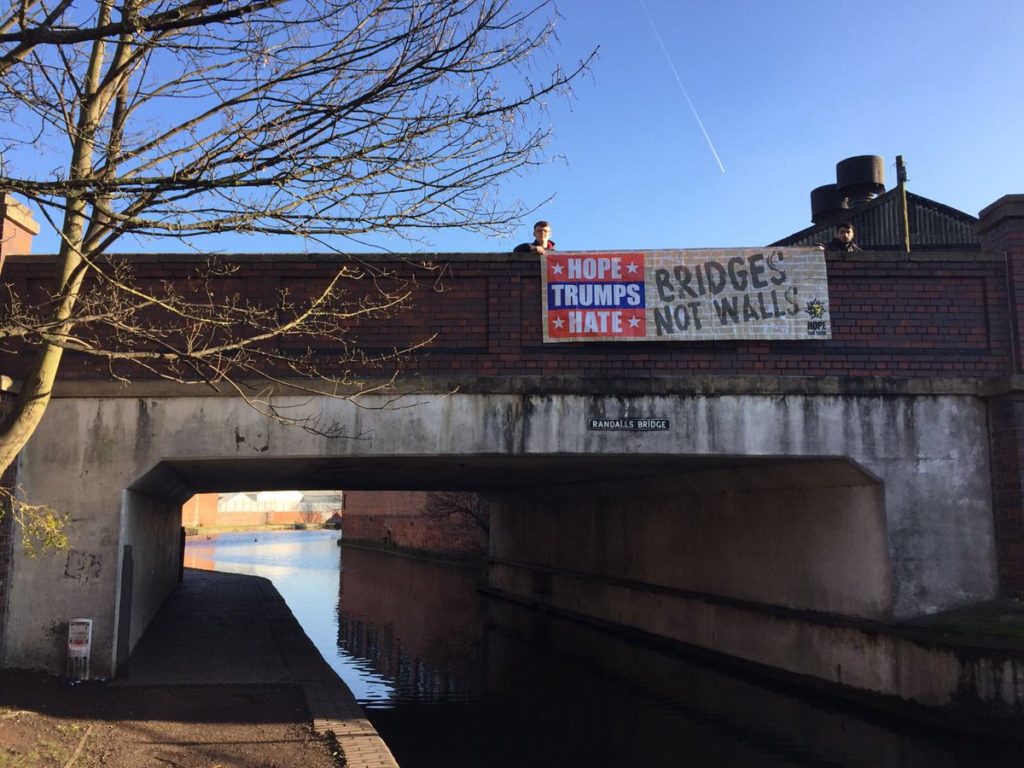 A pair of protesters with their banner in Dudley.   Twitter / @hopenothate

Hope Not Hate has made opposition to Donald Trump a key plank of its activism, stating: “The election of Donald Trump makes our world an incredibly dangerous place. But today is the start of the fightback.”

As has the Green Party, which has organised banner drops in Bristol, Lincoln, Brecon Beacons, Aberystwyth, West Sussex, and Guildford.

Jonathan Bartley, Green Party co-leader, said: “We are all citizens of the world and migration is a part of 21st century life. It’s not in anyone’s long term interests to keep building up barriers and shutting out refugees who desperately need our help. That’s why Bridges Not Walls is so important and I look forward to being part of this display of unity during these turbulent times.

“As Trump takes power, we will not let the forces of fear and hate he represents stop us from helping some of the most vulnerable in our society. We’re proud to be taking a stand against xenophobia, the rise of the far right and the politics of hate and division, both in the US and here in the UK.” 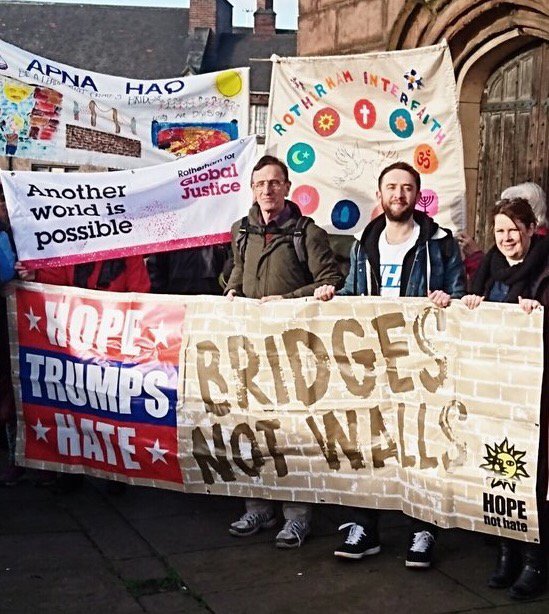 For those terrified by the thought of a Trump Presidency, Nick Lowles, head of Hope Not Hate, has posted six suggestions to survive Trump’s inauguration to his blog. The ideas include posting an image proclaiming “Hope Trumps Hate” to Facebook and Twitter, doing a nice deed for someone, and watching a video to “remember you are not alone in opposing Trump”.