The so-called “anti-racist” organisation Hope not Hate (HnH) which has previously targeted moderate Muslims, is now dedicating resources to campaigning against UKIP in an up-and-coming by-election.

The group — which recently fund raised off the back of the murder of Jo Cox MP — is allegedly distributing literature in the Stoke-on-Trent Central area, focusing on issues such as the ivory trade, climate change, income tax rates, and Britain’s National Health Service.

No explanation is given as to how these issues relate to HnH’s stated aims of “fighting racism and extremism”, though the group’s leaflet does include a reference to banning the burqa while incorrectly illustrating the topic with a picture of a niqab.

Also @lowles_nick why has @hopenothate used pics of niqabs to illustrate the burqa? Tad culturally ignorant don't you think? https://t.co/4ZIlASohKN

Electoral Commission rules state: “on printed material such as leaflets and posters, you must include the name and address of: the printer, and the promoter.”

The HnH leaflets include only a PO Box, town, and postal code, but no specific street address for HnH, as specified in multiple examples given by the Electoral Commission. There is no address given for the organisation conducting the campaign in partnership with HnH — a group known as “NorSCARF”.

The Electoral Commission told Breitbart London the leaflets looked to be “bad practice”. 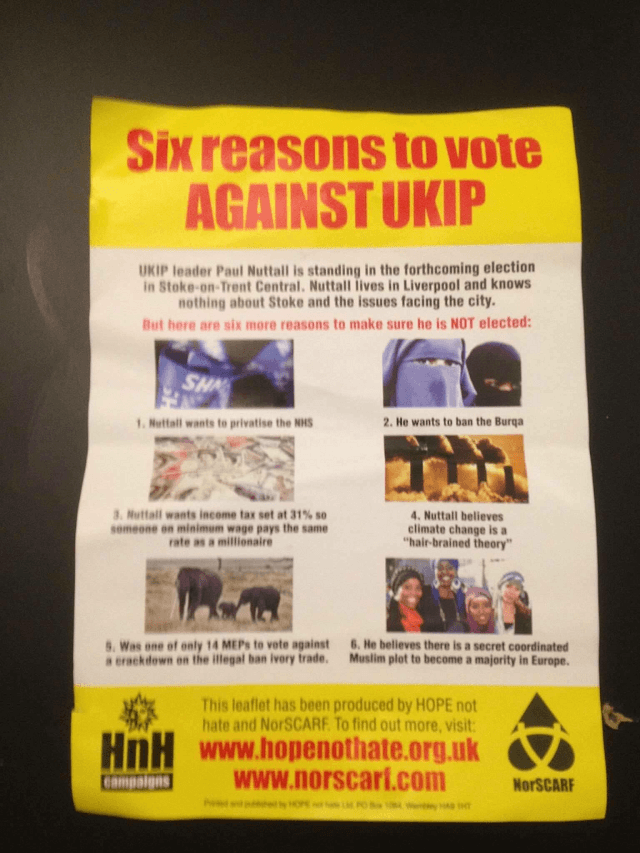 The by-election was sparked when Labour MP and former Shadow Education Secretary Tristam Hunt stepped down, with UKIP leader Paul Nuttall confirming he had been selected as the party’s candidate.

On the leaflets, HnH claims, falsely, that UKIP will “privatise” the NHS, something Mr. Nuttall addressed directly when he announced his candidacy.

“The voters of Stoke will be told in this election that UKIP wants to privatise the NHS. This is a lie. It goes back to comments I made in early 2011 when I spoke about introducing more competition…” he said.

“Let me be clear: UKIP has never stood on a platform of privatising the NHS… and never will…” he added, promising to “put even more money into the NHS”, by “slashing the bloated foreign aid budget”.

HnH raises funds on the promise of fighting racism. That it is now spending resources on promoting socialist tax policies, pseudo-animal welfare, and climate change alarmism could cause problems for the organisation with donors.

They also claim that Mr. Nuttall “knows nothing of Stoke and the issues facing the city”. Mr. Nuttall argues, however, that as a working class Northerner, he is more in touch with the constituency than candidates “born down South with a wealth of connections”, referring to Mr. Hunt, who was born to an aristocratic family in Cambridge.

HnH has been campaigning against UKIP since 2013, and the current Stoke-on-Trent campaign is being conducted in partnership with the North Staffordshire Campaign Against Racism and Fascism (NorSCARF).

“Racist UKIP have set their sights on taking the seat and appear set to throw considerable weight behind the campaign”, the group writes on their website. “We have to do all we can to prevent a UKIP anti-immigrant message winning out,” they add.

The organisation has threatened to sue former UKIP leader Nigel Farage for linking their tactics and policies with extremism.

The group has been described as “Orwellian bigots” by leading Muslim reformer Dr. Zuhdi Jasser, as well as having been exposed by the Economist magazine for grossly exaggerating statistics in one of their reports into the death of Jo Cox MP, which the group subsequently fund raised off.

One of the group’s most senior activists once described their work as intentionally “dirty, underhand, low down, unscrupulous”.