PARIS (AP) — Attacks in France by Islamic extremists since 2015 have killed more than 200 “soft targets” — concertgoers, cartoonists and people celebrating Bastille Day. But French security forces are increasingly becoming the focus of the violence.

Interior Minister Gerard Collomb says that as of Aug. 6, intelligence services have foiled seven attacks so far this year, while the nation remains in a state of emergency since 2015. Here’s a look at attacks carried out in 2017:

—Aug. 9: A driver of a BMW slammed the car into a group of soldiers in a Paris suburb, injuring six of them, before speeding away. The driver’s motive is unclear, but officials say he deliberately aimed at the soldiers, and counterterrorism authorities have opened an investigation.

—Aug. 5: A 19-year-old French teenager who had been treated at a psychiatric hospital tried to attack soldiers guarding the Eiffel Tower, while brandishing a knife and shouting “Allahu akbar,” the Arabic phrase for “God is great.” He was later deemed unfit for prosecution, and sent back to the hospital. No one was hurt in the incident.

—June 19: A 31-year-old Frenchman identified as Adam Djaziri slammed his car into the lead vehicle of a police convoy on Paris’ tourist-filled avenue. The attack was aborted when his car exploded, killing only himself. His car and home were packed with weapons. In a letter serving as a last testament, the man pledged allegiance to Islamic State group leader Abu Bakr al-Baghdadi and practiced shooting “to prepare for jihad.” 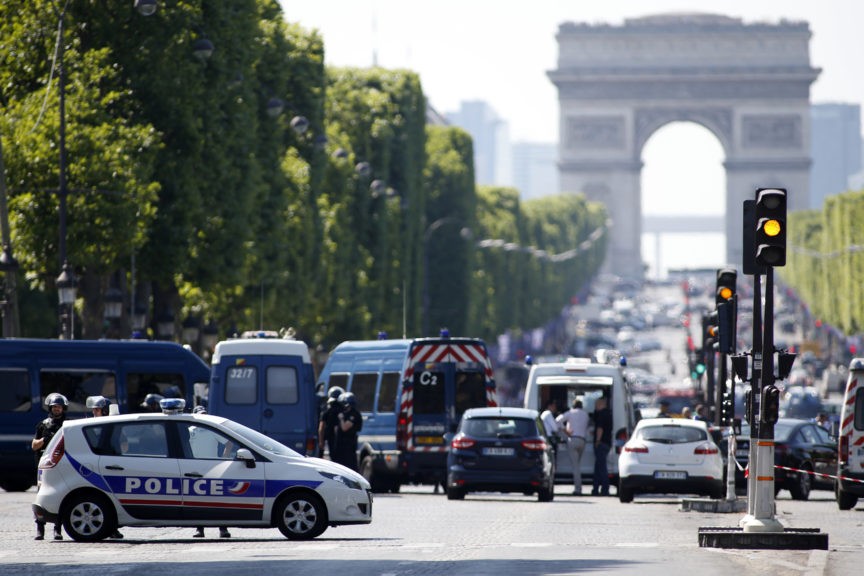 Police forces secure the area on the Champs Elysées in Paris, Monday, June 19, 2017. A driver rammed his car into a police vehicle in the Champs-Elysees shopping district Monday, prompting a fiery explosion (AP Photo/Matthieu Alexandre)

—June 1: A 40-year-old Algerian doctoral student wielding a hammer attacked police officers patrolling in front of Notre Dame Cathedral. The assailant shouted “This is for Syria!” before being shot and wounded by police. Investigators who searched his student residence in the Paris suburb of Cergy-Pontoise found a declaration of allegiance to IS he filmed the morning of the attack. He presented himself as a “soldier of the caliphate.”

—April 20: A gunman shot and killed a police officer on the Champs-Elysees just days before the French presidential vote. Karim Cheurfi, 39, opened fire with a Kalashnikov assault rifle on the famed boulevard, striking a police officer with two bullets to the head and wounding two others before being shot and killed by police. IS quickly claimed the attack.

—March 18: A man shot and wounded a police officer with a revolver loaded with birdshot, then attacked soldiers at Orly airport while brandishing a revolver and yelling that he wanted to kill and then die for Allah. Other soldiers fatally shot the attacker, Ziyed Ben Belgacem. 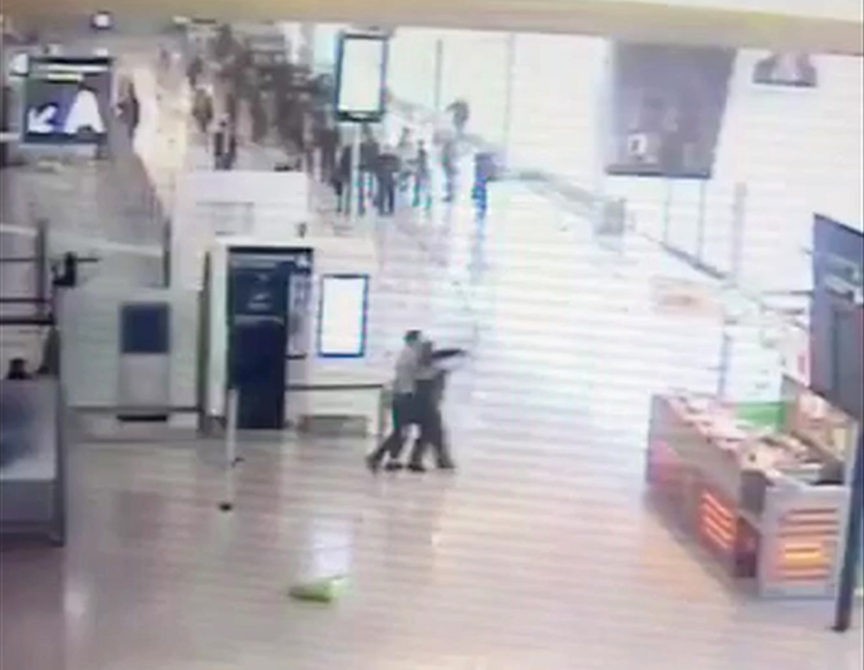 In this image taken from video of CCTV footage provided to AP on the condition that its source not be revealed, suspected Islamic extremist Ziyed Ben Belgacem, center left, holds a soldier after grabbing her from behind at Paris’ Orly airport, Saturday, March 18, 2017. (CCTV via Mobile Phone via AP)