BELGRADE, Serbia (AP) — Evidence is piling up that this year’s sizzling summer in central and southeastern Europe has decimated crops, drained rivers and hurt the animal world.

The region is enduring one of the hottest and driest summers in years, during which several people have died and dozens of wildfires have flared. The drought has also ratcheted up demand for water and electricity.

Serbia has been one of the hardest hit countries, with experts saying an estimated 60 percent of corn crops destroyed. The ministry of ecology also says water levels across the country have dropped drastically, threatening fish stocks.

“This is really sad!” said farmer Pavel Tordaj from the northern Serbian village of Padina, while showing withered corn and scorched sunflower on his land.

Tordaj said nearly all his corn, and half of his sunflowers have been destroyed by the drought, adding that it will be very hard for the farmers to make up for the loss.

“Who will pay for that?” he asked. “We took loans from the bank.” 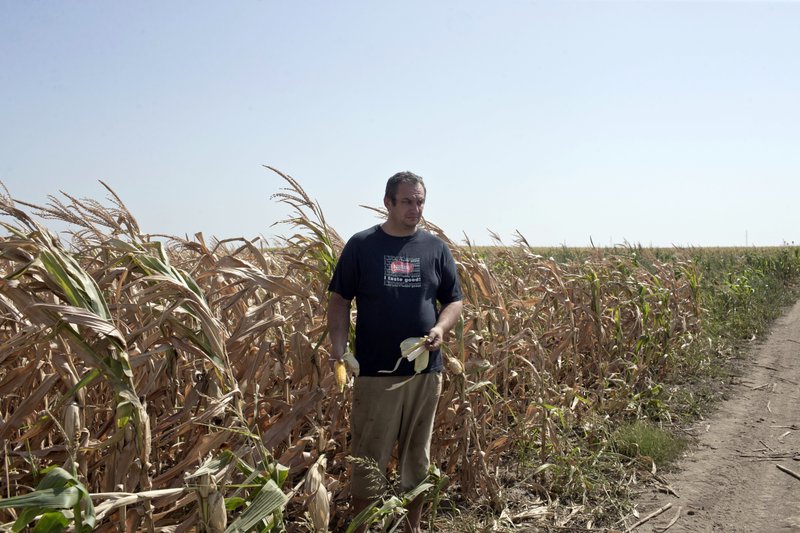 Pavel Tordaj, 42, a farmer, stands inside his field of corn which has been decimated by drought, in Padina, Serbia, Thursday, Aug. 10, 2017. Authorities and experts are warning that extremely hot and dry summer this year in the Balkans has decimated crops, dried rivers and hurt the animal world. (AP Photo/Marko Drobnjakovic)

Corn accounts for around one million hectares (2.4 million acres) of Serbia’s farmland, which is widely perceived as having a poor watering system.

Overall, around 60 percent of corn crops have been destroyed, according to Zeljko Kaitovic from the state-run Maize Research Institute.

“Unfortunately, extreme drought conditions caught the corn in the most sensitive phase of development,” he said. “Not even heavy, longer rains could help now.”

Serbian government officials have said any shortages following this year’s drought will be covered from state reserves to avoid further damage. The government has also urged consumers to be cautious with water usage and factories to refrain from depositing waste into drained rivers where the fish are already suffering.

In neighboring Hungary, the drought has reduced the number of birds hatching in a national park as many of the breeding areas have dried out.

Preliminary state statistics have shown a predicted decline in Hungary’s grain harvest of around seven percent. Rising temperatures have also prompted Hungary to set a stricter legal definition of what constitutes a drought, which will make it more difficult for farmers to get compensation from insurance companies.

In the country’s Koros-Maros National Park, the majority of stork nests observed this year had only three young birds instead of the usual four and none had more than five. Many of the nests had only a single nestling.

Meanwhile, in Romania, experts from the country’s Academy of Agricultural and Forest Science were holding a conference Thursday on how the weather changes are affecting the crops. The academy said earlier this year that hot temperatures in recent years had killed off fruit trees and vines, including apple, pear, plum, cherry, apricot, peach and walnut trees.