Seven African and European leaders are meeting in Paris on Monday to discuss ways to stem the flow of migrants into Europe from northern Africa.

French President Emmanuel Macron has invited his counterparts from Niger and Chad as well as the head of the Libyan unity government Fayez al-Sarraj, whose countries lie on the main transit route for migrants heading to Europe.

European nations are keen to offer development aid and funding to their African partners in return for help in stemming the flow of economic migrants and asylum seekers.

Some 125,000 migrants have crossed the Mediterranean by boat this year, according to UN figures, with the vast majority arriving in Italy before travelling on to other EU members. An estimated 2,400 have died en route. 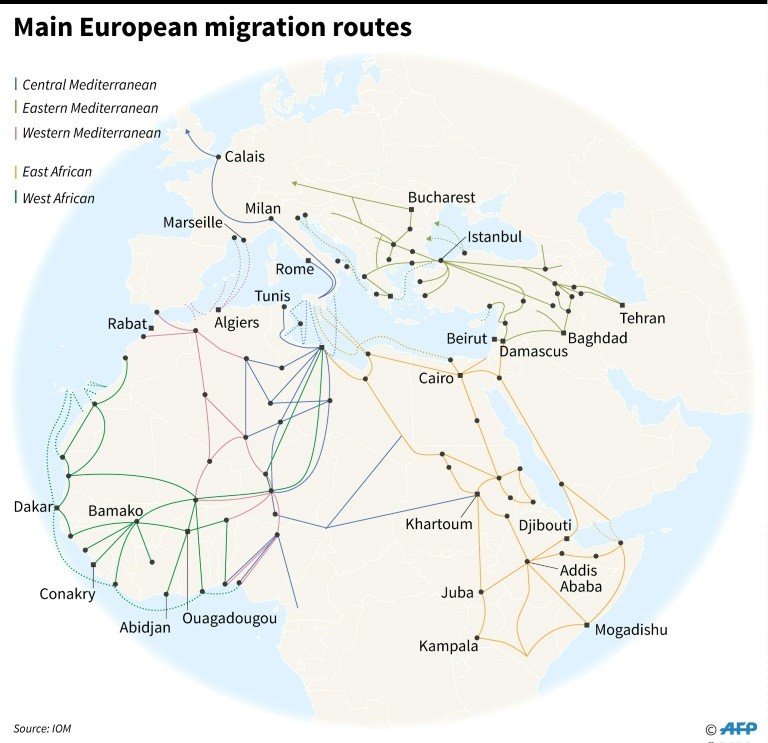 France is seeking improved border controls and patrolling of the waters around Libya — a mission complicated by the country’s competing governments and state of lawlessness — as well as development aid to create jobs in Africa.

In July, Macron also proposed — without consulting his allies — the creation of so-called “hotspots” in Africa where asylum seekers fleeing persecution or war could lodge a request to travel to the EU.

Under such a system they may be less tempted to make the perilous trip across the Mediterranean with the help of people traffickers, who frequently overload flimsy boats and often mistreat the migrants.

“Above all, we have to save lives, we have to avoid situations where migrants and refugees put their lives in danger to reach protection,” said Ralf Gruenert, France’s representative of the UN refugee agency UNHCR.

“This working meeting will try to explore… how to ensure that refugees and asylum seekers can access protection mechanisms,” he told AFP.

The meeting might also provide insight into why arrivals have plummeted in recent weeks from Libya, the main route into Europe since a separate pathway from Turkey into Greece was shut down in 2016.

The numbers arriving in Italy have fallen by around 50 percent in July and August compared with last year.

The president of Niger, Mahamadou Issoufou, will tell his European counterparts that the number of migrants passing through the transit town of Agadez in his country has fallen by 80 percent thanks to government efforts, a source in his team told AFP.

Libya has also sought to restrict the work of NGOs operating rescue boats in the Mediterranean that pick up migrants stranded on inflatable dinghies or other unseaworthy crafts.

Italy has also sought to impose a code of conduct on the NGOs, which face accusations from some critics that their operations have encouraged migrants to attempt the crossing with the knowledge that they will be picked up in an emergency.

The code has been signed by five of seven NGOs with rescue ships — only the French organisation Doctors Without Borders and Germany’s Sea-Watch have refused as a matter of principle, saying they wait to maintain their independence.

The code is set to be approved by all the countries attending Monday’s meeting, according to the Italian news agency ANSA.

After the talks about immigration during the day, the European leaders are set to discuss reforming the EU and joint efforts to prevent terror attacks.