Germany’s liberal Free Democratic Party (FDP) walked away from coalition talks Sunday night after weeks of tense negotiations, leaving Germany without any viable options for forming a new government for the first time since the Second World War.

The difficult electoral result for Mrs. Merkel and the refusal of her previous ‘grand coalition’ partner the SPD to enter coalition again left just one option with enough seats to command half the Bundestag — the so-called Black-Yellow-Green ‘Jamaica coalition’ of Merkel’s party supported by the FDP and Greens.

Yet the yellow portion of this potential group — the FDP — walked away from the table Sunday night, days after the informal cut-off date for the end of negotiations passed. Party leader Christian Lindner said the talks had failed to find a common cause on how to run the country, and that at least was the bare minimum for a stable government, reports Die Welt.

Speaking Sunday night, Merkel told press: “As chancellor, as acting chancellor, I will do everything to make sure this country continues to be well governed through the tough weeks ahead.” 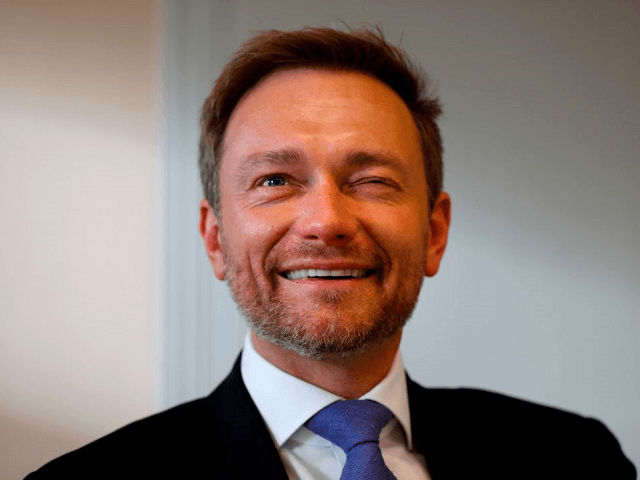 Christian Lindner, head of the Free Democratic Party (FDP), addresses a statement on November 20, 2017 in Berlin after coalition talks failed. Following more than a month of gruelling negotiations, the leader of the pro-business FDP, Christian Lindner, walked out of talks overnight, on Novelber 19, 2017 saying there was no ‘basis of trust’ to forge a government with Merkel’s conservative alliance CDU-CSU and the ecologist Greens. / ODD ANDERSEN/AFP/Getty Images

The situation now leaves Germany with just a handful of options on how to proceed in finding a government now the first preference of coalition has failed and the leader of the second largest party, the SPD, has again insisted he would not join a grand coalition.

The federal president Frank-Walter Steinmeier could choose to ignore the result and crown Merkel chancellor for a historic fourth term anyway, allowing her to rule a minority government — although this could collapse and seriously undermine public trust and even destabilise the European Union. The euro currency has already reacted to the failure of coalition talks by falling against Sterling Monday morning.

Another option, which is both feared by establishment politicians who see them as a “disaster” waiting to happen, and yet considered by many as becoming more likely with every passing day, would be for the president to call a snap election, which would have to take place within 60 days.

Polls suggest that if there were to be another election soon, Merkel’s party would fall in vote share again, and the populist AfD would enjoy another boost, potentially gaining dozens of more seats.

Whatever the result, it seems increasingly likely that Angela Merkel’s time as Chancellor — presently acting chancellor — of Germany is limited, spelling the end of 12 years of power.

There is a clear frustration with the present situation, with a majority of Germans when asked saying they would prefer to have another election soon, to settle the future governance of their country.

German media has clearly identified the migrant crisis as a key causational factor in the collapse of support for Angela Merkel, and for the failure of these talks, with Die Welt reporting: “The fate of these discussions was already sealed on 5th September 2015. Merkel’s decision to keep the German border open for refugees for a variety of reasons led to the closing of the door [on this] Sunday for the first German multi-party coalition”.

The 5th of September date cited by the German newspaper refers to the day Angela Merkel spoke to Hungarian Prime Minister Viktor Orbán in a private telephone conversation about the migration crisis then building along the Balkan route. Later that day, Merkel announced through a government spokesman that Germany would not turn refugees away.