THE HAGUE, Netherlands (AP) — Ratko Mladic, the former commander of the Bosnian Serb army, was sentenced Wednesday to life imprisonment after a United Nations special court found him guilty of genocide and crimes against humanity that it labeled as some of the “most heinous” in human history.

Mladic, 75, was found guilty by the United Nations’ Yugoslav war crimes tribunal of leading forces responsible for crimes including the worst atrocities of Bosnia’s 1992-1995 war — the deadly three-year siege of the Bosnian capital, Sarajevo, and the 1995 massacre of some 8,000 Muslim men and boys in the eastern enclave of Srebrenica, which was Europe’s worst mass killing since World War II.

“The crimes committed rank among the most heinous known to humankind,” Presiding Judge Alphons Orie said when reading out the court’s judgment.

The convictions were hailed as a victory for international justice by the court’s prosecutor and rights groups.

UN High Commissioner for Human Rights Zeid Ra’ad Al Hussein called Mladic, “the epitome of evil” and described the prosecution as “the epitome of what international justice is all about.”

The verdict, he added, should serve as a warning to other perpetrators of atrocities “that they will not escape justice, no matter how powerful they may be nor how long it may take.

“They will be held accountable.” 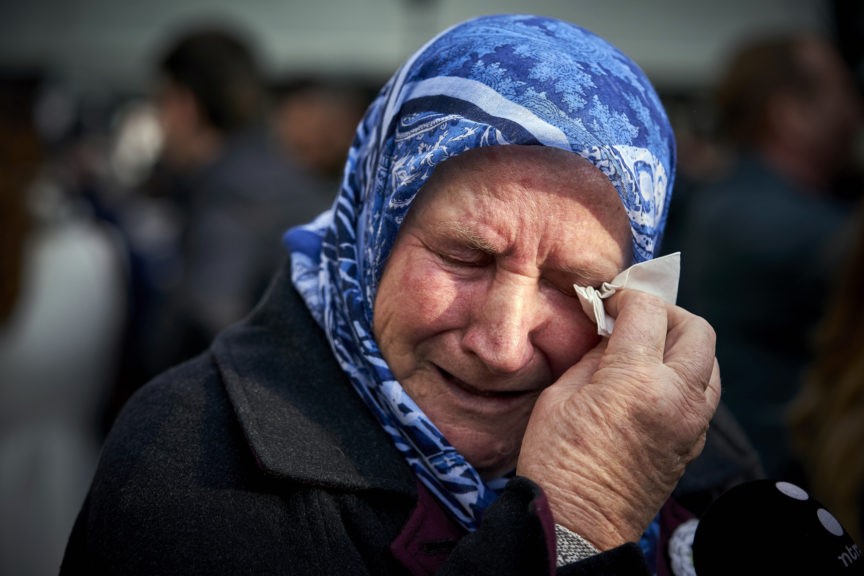 Nura Mustafic, one of the Mothers of Srebrenica and other Bosnian organizations, wipes away tears as she reacts to the verdict which the Yugoslav War Crimes Tribunal, ICTY, handed down in the genocide trial against former Bosnian Serb military chief Ratko Mladic, in The Hague, Netherlands, Wednesday Nov. 22, 2017. (AP/Phil Nijhuis)

A three-judge panel at the court, formally known as the International Criminal Tribunal for the Former Yugoslavia, convicted Mladic of 10 of 11 counts in a dramatic climax to a groundbreaking effort to seek justice for the wars in the former multi-ethnic federation.

Presiding Judge Orie read key parts of the judgment Wednesday after ordering Mladic out of the courtroom for the final verdict over an angry outburst.

Survivors known as the Mothers of Srebrenica, clapped when the convictions were read out.

Mladic’s son Darko dismissed the convictions: “I’m not surprised,” he said. “The court was totally biased from the start.”

“This judgment is wrong, it does not achieve anything … and will be an obstacle to future normal life in the region,” he said.

Bosniaks and Serbs watched from near and far as the long-awaited climax approached. Wednesday’s judgment marks the end of the final trial at the tribunal, which was set up in 1993, while fierce fighting was still raging in Bosnia. The court will close its doors by the end of the year.

Emotions ran high outside the courtroom, with a small skirmish reflecting lingering tensions between Serbs and Bosniaks over the trial and the war.

Despite ailing health, Mladic looked relaxed, greeting lawyers, crossing himself and giving a thumbs-up to photographers in court. He nodded regularly as Orie read out descriptions of atrocities by Bosnian Serb forces, one by one.

But midway through the hearing Mladic’s lawyer, Dragan Ivetic, asked for a delay because the general was suffering high blood pressure. The judge refused, and Mladic burst out with criticism and was manhandled out of the room by guards to watch the remainder of the hearing in a separate room via a video link.

“I was not impressed,” Chief Prosecutor Serge Brammertz said. “I think that many of the survivors in the courtroom and seeing him had also very high blood pressure and, as you have seen when he left, when he started speaking, it was not about his health but much more I think trying to insult the judges.” 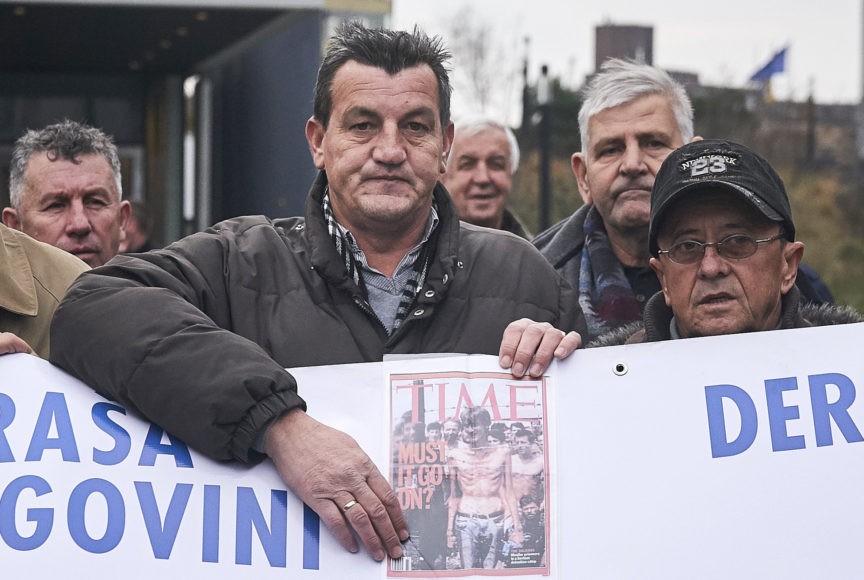 Fikret Alic, center, holds holds a copy of a magazine bearing his image, outside the Yugoslav War Crimes Tribunal, ICTY, as he waits for the verdict to be handed down in the genocide trial against former Bosnian Serb military chief Ratko Mladic, in The Hague, Netherlands, Wednesday Nov. 22, 2017. Alic, a Bosnian man who became a figurehead for the suffering of Bosnians during the war when he was photographed as an emaciated prisoner behind the wire of a Bosnian Serb prison camp, was among those waiting to watch the hearing. (AP/Phil Nijhuis)

Brammertz said he would study the lengthy written judgment before deciding whether to appeal the single acquittal.

The conflict in the former Yugoslavia erupted after the country’s breakup in the early 1990s, with the worst crimes taking place in Bosnia. More than 100,000 people died and millions lost their homes before a peace agreement was signed in 1995. Mladic went into hiding for around ten years before his arrest in Serbia in May 2011.

Mladic’s political master during the war, former Bosnian Serb President Radovan Karadzic was also convicted last year for genocide and sentenced to 40 years. He has appealed the ruling. The man widely blamed for fomenting wars across the Balkans, former Yugoslav President Slobodan Milosevic, died in his UN cell in 2006 before tribunal judges could reach verdicts in his trial.

In Lazarevo, the small Serbian village where Mladic was arrested in 2011, residents dismissed the guilty verdict against him as biased.

Villagers said they do not recognize the tribunal, which they say has sought to solely blame Serbs for the crimes of the Yugoslav wars of the 1990s.

Igor Topolic said he was horrified by the convictions, calling Mladic a “Serbian national hero.”

For a former prisoner of Serb-run camps in northwestern Bosnia who was in The Hague to see justice in action, the verdict was sweet relief.

Fikret Alic, who became a symbol of the horrors in Bosnia when his skeletal frame behind barbed wire in a Bosnian Serb camp was featured in front-page photos published in the Time magazine in 1992, said “justice has won, and the war criminal has been convicted.”