The British people predominantly did not vote to leave the European Union (EU) because they are racist and the public’s desire for control over immigration is not driven by prejudice, a report has found.

The study, by the liberal think tank Open Europe, found that the public’s greatest concern about immigration was that background and criminal checks are made. The race or ethnic background of new arrivals was largely unimportant to people.

People were also concerned if migrants would claim benefits, if they spoke English, and whether or not there were well educated, but they were less worried about their sexuality and if they were Christian.

EU membership mandates unrestricted and uncontrolled immigration, which the public opposes, but not because of bigotry, according to the study.

“Since the Leave vote in last year’s referendum, commentators and politicians have wrongly interpreted Brexit as a mandate simply to pull up the drawbridge,” the authors explained.

“We found that people’s attitudes on immigration are far more nuanced and sophisticated than often is portrayed in political or media debate.”

Aarti Shankar, a policy analyst for Open Europe, added: “We found little evidence that the desire to control migration was driven by racism or xenophobia.” 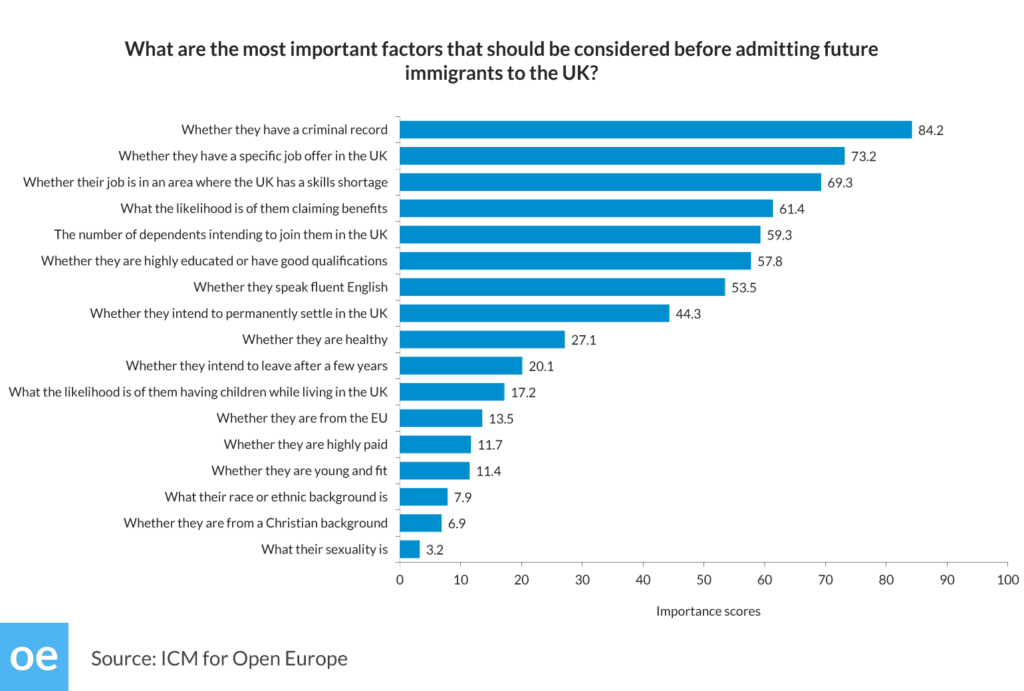 The think tanks used a poll of 4,000 people and a series of focus groups across the country to conduct the study.

A majority of Brits (56 per cent) think the government should judge if migrates will contribute to the economy and British way of life. Fewer (36 per cent) just wanted numbers cut.

A minority of Brexit voters agreed with the latter position (43 per cent), leading authors to deduce that “while immigration was an important driver of the Leave vote, it does not necessarily follow that all Leave voters support a highly restrictive immigration system”.

Respondents were, meanwhile, more likely to be welcoming of certain professions than others, including doctors and academics, but less likely to want “general job seeker” migrants and construction workers, who could drive down wages for the working classes.

However, the study also found the public would oppose harshly restricting immigration if it resulted in negative personal or national economic impacts, with half saying they opposed reducing numbers if it contributed to an economic recession. Since the Brexit vote, the economy and job market have done better than expected.

“Our data contradicts the view of some commentators that xenophobia, racism and intolerance were major drivers of the referendum result,” the report explains.

Adding: “According to our results… Across both Leave and Remain voters, an immigrant’s sexuality, religious background, and race and ethnicity are considered the least important factors in determining entry.”