Judge Pablo Llarena’s indictment wrapped up the investigation into the events that six months ago plunged Spain into its deepest political crisis in decades.

Rebellion charges are punishable with up to 30 years in prison under Spanish law.

In a court ruling issued Friday, Llarena said that 25 Catalan separatists in total will be tried for rebellion, embezzlement or disobedience.

Others charged with rebellion were former Catalan Vice President Oriol Junqueras, who is already in pre-trial detention; seven other members of the ousted Catalan government; former Catalan parliament speaker Carme Forcadell; jailed separatist activists Jordi Sanchez and Jordi Cuixart; and the leader of the left-republican ERC party, Marta Rovira, who defied the judge’s summons and announced Friday that she was fleeing Spain.

Puigdemont indicated his resolve wasn’t shaken by the charges. “Let’s see what happens tomorrow, what happens today. Every day things change,” Puigdemont said in Helsinki, where he was on a visit. 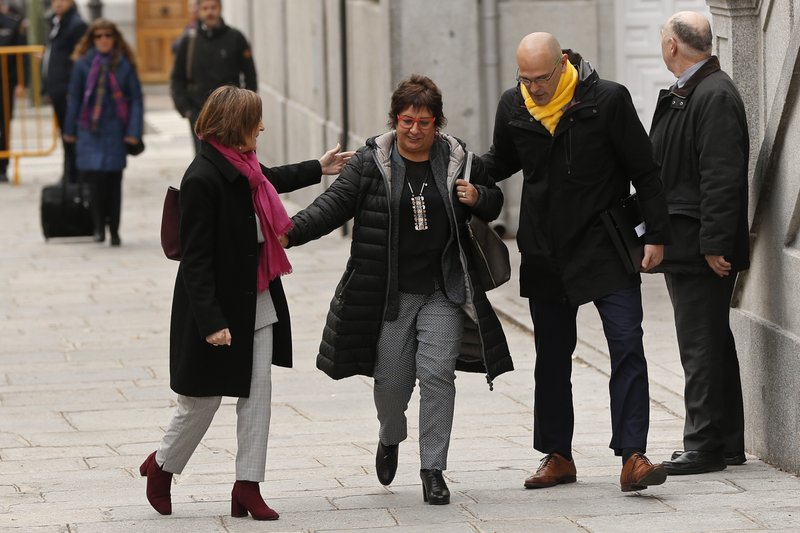 He also aimed criticism at the judge’s decision, suggesting Llarena was influenced by the political climate. “It is not right for a judge to do politics,” Puigdemont said.

In a letter addressed to her party followers and posted on ERC’s website, Rovira didn’t say whether she had left Spain already or where she might go.

“I’m sad, but it’s been more saddening to lead a silenced life,” Rovira wrote, announcing that she had chosen to take “the path to exile.”

The unity of Spain is enshrined in the Constitution, which says the country is “indivisible,” and courts have blocked Catalonia’s independence efforts at every turn. Secession is not allowed without a reform of the top law.

Twelve of the former regional ministers are also charged with misuse of public funds. And seven other lawmakers are charged with disobedience.

The judge also required the 14 ex-members of the Catalan Cabinet to pay 2.1 million euros ($2.6 million) as a collective deposit before the trial establishes whether they need to pay back misused public funds.

That figure includes 1.6 million euros that, according to the judicial investigation, were used to pay for the Oct. 1 referendum that set the turbulent events in motion.

Llarena described the case as “an attack on the constitutional State that, through the desire to impose a change in the form of government for Catalonia and the rest of the country, is of unusual gravity and persistence.”

His ruling also warned that the strategy to secede Catalonia is “dormant and awaiting resumption” once separatists regain control of the regional Catalan government.

Six of the politicians, including Rovira, had been summoned to court on Friday — an indication that the judge may later in the day order them jailed pending trial.

EU on the Brink: Hundreds of Thousands March in Catalonia to Demand the Release of ‘Political Prisoners’ https://t.co/zhxDUb1fkL

They include Jordi Turull, a former minister of the ousted regional Cabinet, who on Thursday failed in his initial bid to be elected as the region’s new president.

He has a second chance to be voted in by simple majority on Saturday, but that would be thwarted if Turull ends up being preventively jailed on Friday.

That would leave in limbo the immediate future of a government in the northeastern region, possibly heading to a new election later this year.

The semiautonomous region has been without a leader for nearly five months after central authorities took control following October’s illegal independence declaration.

Polls show Catalans are equally divided on the secession issue, although a vast majority supports solving the issue through a legal referendum agreed with central authorities.