An Italian poll has shown the right-populist La Lega led by firebrand Interior Minister Matteo Salvini ahead of the anti-establishment Five Star Movement (M5S) for the first time.

The poll, released Monday by Italian firm SWG, shows La Lega (The League) with 29.2 percent of the vote, just ahead of their coalition partners the anti-establishment Five Star Movement which polled 29 percent.

The popularity of La Lega has almost doubled following the national election in which the party scored 17.4 percent in March after the party formed a new government with M5S which was the largest single party in the election with 32.7 percent. 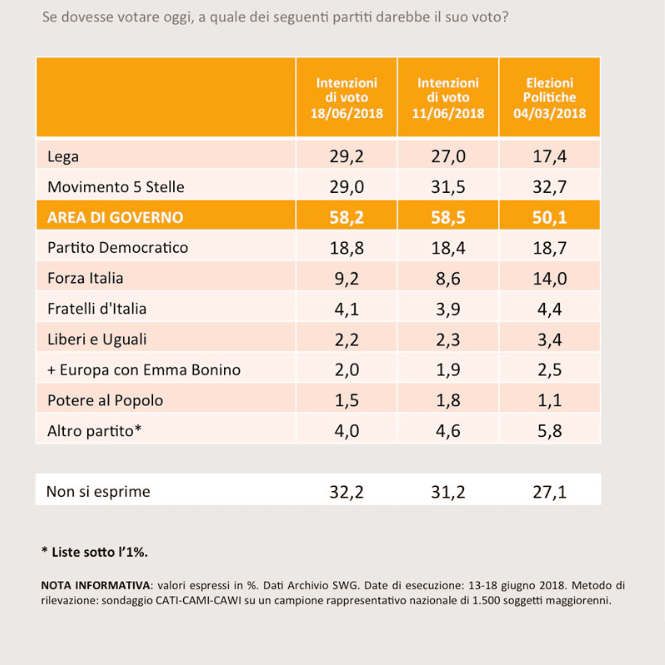 Much of the newfound popularity of La Lega has come following Salvini’s decision to ban the migrant transport ship Aquarius, operated by NGO SOS Méditerranée, earlier this month from Italian ports along with the 629 migrants onboard.

While the move was criticised by French President Emmanuel Macron and others, an IPSOS poll showed that nearly 70 percent of Italians agreed with Salvini’s decision.

Following the move, Salvini spoke of other NGOs trying to bring migrants to Italy saying: “These gentlemen know that Italy no longer wants to be complicit in the business of illegal immigration, and therefore will have to look for other ports [not Italian] where to go.”

Over the weekend the NGO Mission Lifeline referred to Salvini as a “fascist” in a tweet which was later deleted.

In response, Salvini posted a picture of a man with a large nose-piercing and a dyed pink mohawk he claimed was a member of the crew of an NGO vessel and wrote: “This gentleman is in the crew of the German NGO ship who, while waiting to load immigrants, called me a ‘fascist,’ Reassuring I would say!”

Salvini has also begun to forge an alliance with several anti-mass migration governments including the conservative-populist government of Austria and met with Vice-Chancellor and leader of the populist Freedom Party Heinz-Christian Strache on Tuesday.