The mainstream media has given breathless coverage to how Britons can protest the visit of the democratically-elected President of the United States, Britain’s closest ally, next week.

The taxpayer-funded BBC, which presents itself as politically neutral, told its readers, “Get ready, UK”, when sharing the article “Giant ‘Trump Baby’ could fly over London for president’s visit” on Facebook.

Commuter freesheet the Metro dedicated a whole comment piece to Leo Murray, the self-styled ‘activist’ and creator of the grotesque 20-foot caricature balloon of President Donald J. Trump which leftist London Mayor Sadiq Khan granted permission to fly in the capital during the visit.

Murray called the democratically-elected president a “tyrant” and a “despot”, writing: “If this generation is going to have to fight fascism again, we may as well have a bit of a laugh while we are doing it.”

This point is key. The day Donald Trump won the US presidential election, I found myself gripped by a profound sense of dread. It was a feeling that I had not experienced since I first got to grips with the looming threat of catastrophic climate change, the issue I now work on every day.

Murray now plans to follow Trump around the globe with his crowd-funded inflatable, “reach[ing] out to local activist groups around the world who want to help”.

The Mirror, which has replaced its usual red masthead displays a rainbow to show its support for Gay Pride, headlined a Thursday article: “How can I protest against Donald Trump’s visit to the UK? All the marches and demonstrations and how you can get involved”.

“Donald Trump is coming to the UK and people are angry,” proclaims the leftist newspaper, which helped found the far left HOPE not Hate group and was embroiled in a fake news scandal after publishing fabricated pictures of British soldiers abusing Iraqi prisoners in 2004.

“Here’s a list of the biggest protests, along with Facebook links and ways you can get involved,” the paper invites, proceeding to outline a list of protests from President Trump’s arrival on Thursday evening, finishing with a “Carnival of Resistance” the following Saturday.

Former newspaper the Independent — which shuttered its print edition following a long decline in readership — continued in the same vein as The Mirror, with the usual suspects of leftist agitators the TUC [Trades Union Congess], Stop the War, Friends of the Earth and Momentum” — a far left Labour Party faction loyal to Jeremy Corbyn — leading the protests.

The Independent, like other leftist media outlets, savoured writing on the “Trump baby blimp”.

'The Trump baby blimp is the ultimate symbol of Britain’s commitment to free speech' https://t.co/Hbzd2c0kL5

People really want to fly this unflattering Trump balloon above London when he visits https://t.co/nswH1o8OG3 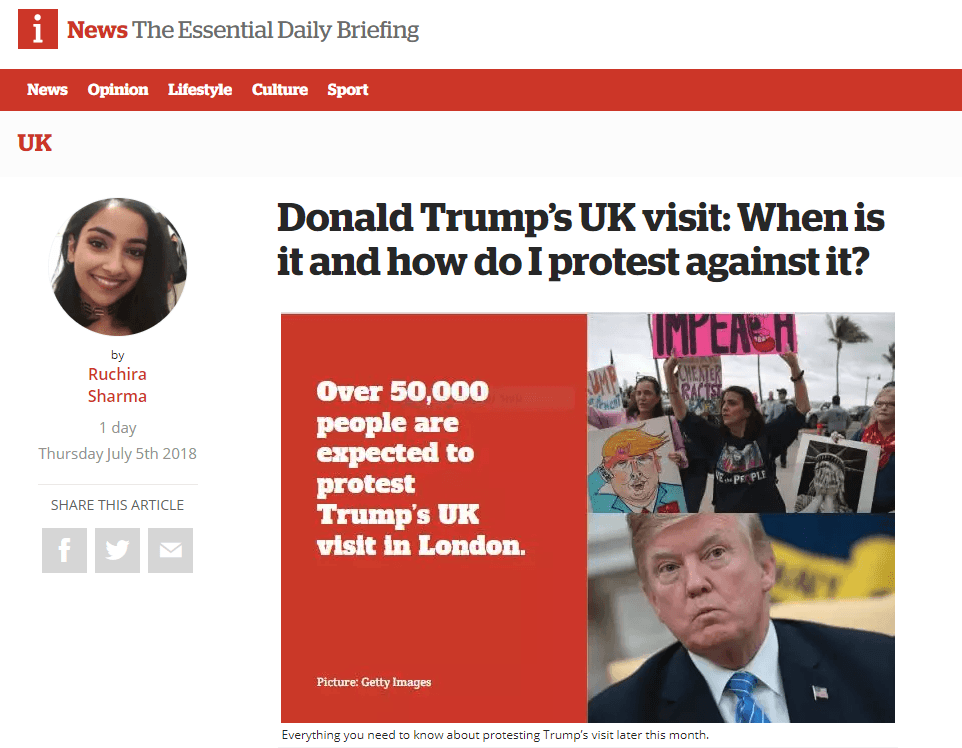 The former sister publication of the Independent, the i, Thursday 5th July 2018

London’s free newspaper the Evening Standard, edited by former Chancellor of the Exchequer and architect of the anti-Brexit ‘Project Fear’ campaign George Osborne, published an article on “everything you need to know about London’s anti-Trump rally with 50,000 people set to attend”.

It included an itinerary and details on coaches put on “to ferry people to the protest from all over the country, including Manchester, Birmingham, Cardiff and Plymouth”. 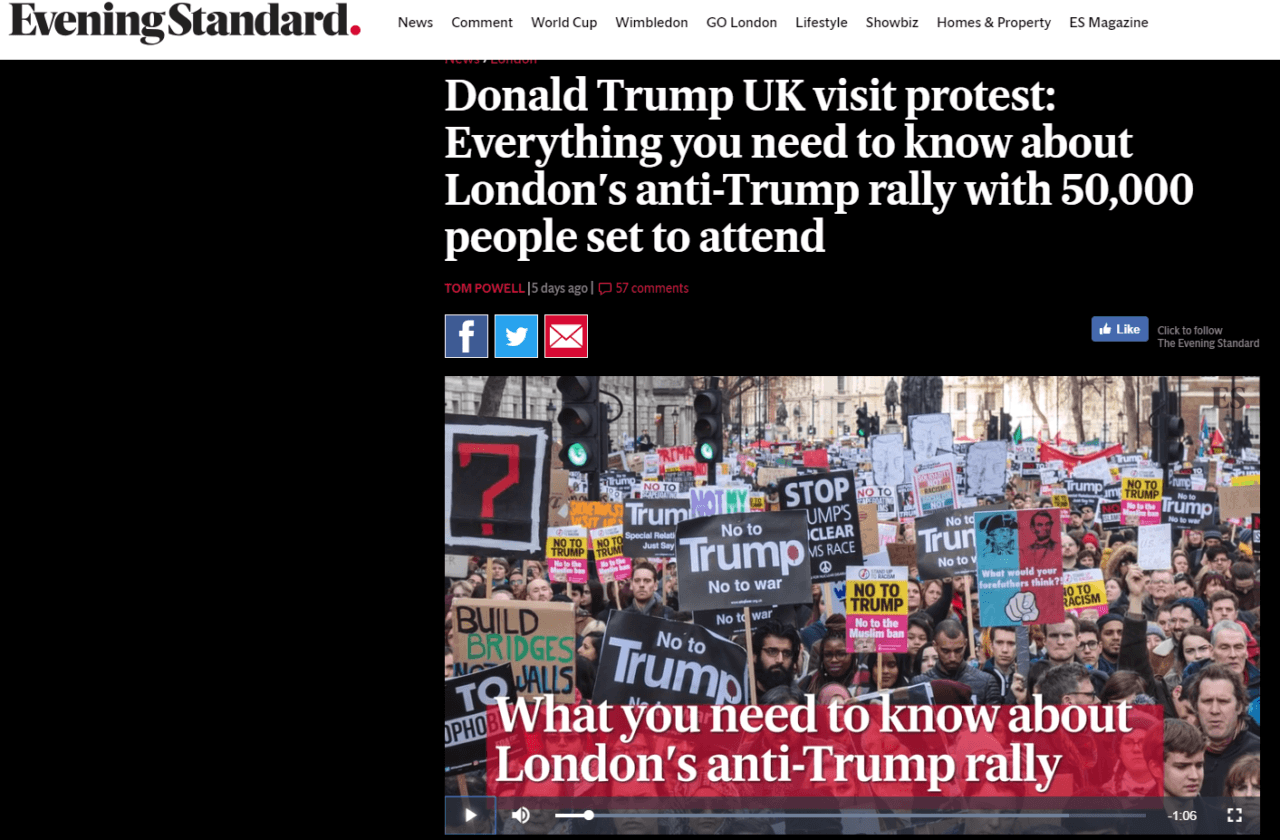 And the failing left-liberal Guardian, along with its news coverage of the Trump balloon and protests, published an opinion piece telling readers: “Here’s why you should join us on the Trump protest in London on 13 July.”

Shaista Aziz and Asad Rehman wrote for the leftist newspaper:

…It is imperative that we use Trump’s visit to the UK on 13 July as an opportunity to demonstrate the strong resistance here to the heinous policies of his administration. Not only that; we must use it to build a loud, intersectional anti-racism and pro-migrant rights movement in the UK that will not shy away from naming fascists for what they are, and will not whitewash the politics of hate, racism and misogyny. If we leave things until they get even worse, it will be too late. 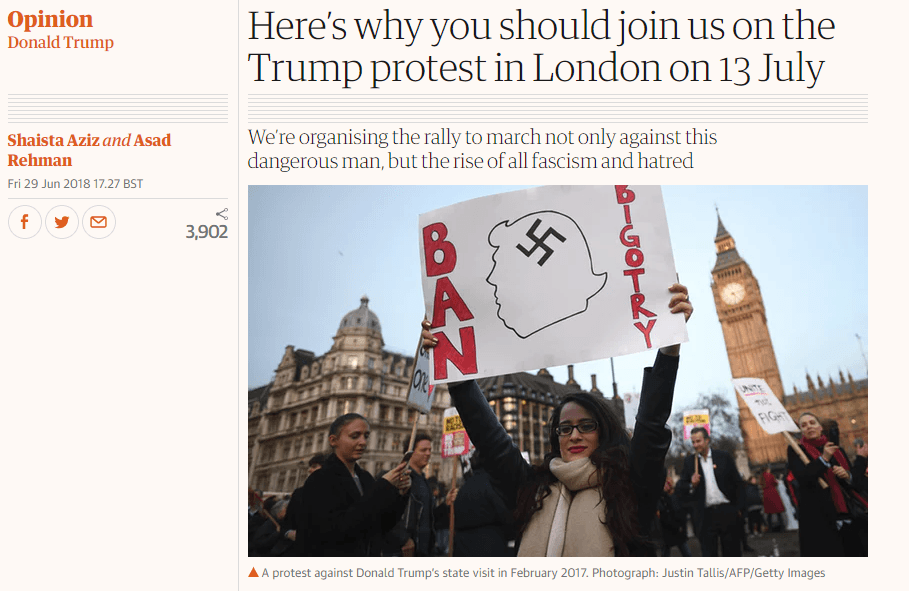 Ben Harris-Quinney, chairman of the conservative Bow Group,  criticised the press for its one-sided portrayal of the British people to the American visitors, telling Breitbart London: “What we are seeing is classic of the mainstream fake news media complex, spotlight on the views of the London elite, tin ear to the views of ordinary people.

“The majority of people in this country support Britain’s close relationship with the U.S. and want to see a trade deal done and a success made of Brexit.”

The think tank chief added: “The metropolitan establishment want none of those things, and so will make huge efforts to both stir up and give coverage to a vocal minority of organised and funded liberals whining about their recent defeats.

“Nations host other leaders all the time, in mature recognition of the value of diplomacy and dialogue. In fact, Britain very regularly hosts other nations whose leaders have human rights records that compare very unfavourably to the United States without protest,” he observed.

“The Bow Group and many other organisations and individuals will be making clear that President Trump is welcome in Britain, and I’m sure his awareness of how unrepresentative these protests are will ensure that any protesters will be standing around all day in the heat for nothing.”