Slammed by both sides of her party, Theresa May’s super-soft Brexit plan has suffered a fresh blow as a pro-EU former Cabinet minister warned the Prime Minister’s blueprint was “less popular than the poll tax”.

Remain supporter and former Education Secretary Justine Greening said the plan unveiled at Chequers was “now dead”, and argued there was “no point having a government spending two vital months working on that” when it should be drafting a new pathway to Brexit.

“The Chequers deal is now more unpopular with the British people than the poll tax was, and that is why it’s untenable to take forward,” she told BBC Radio 4’s World at One on Monday, urging the Prime Minister to “accept it has not worked and look for alternative routes through”.

In making these comments, Greening may have been issuing a veiled warning over the potentially high levels of dissent that may be felt over her soft-boiled Brexit plan, by comparing it to Margaret Thatcher’s introduction of the so-called poll tax. 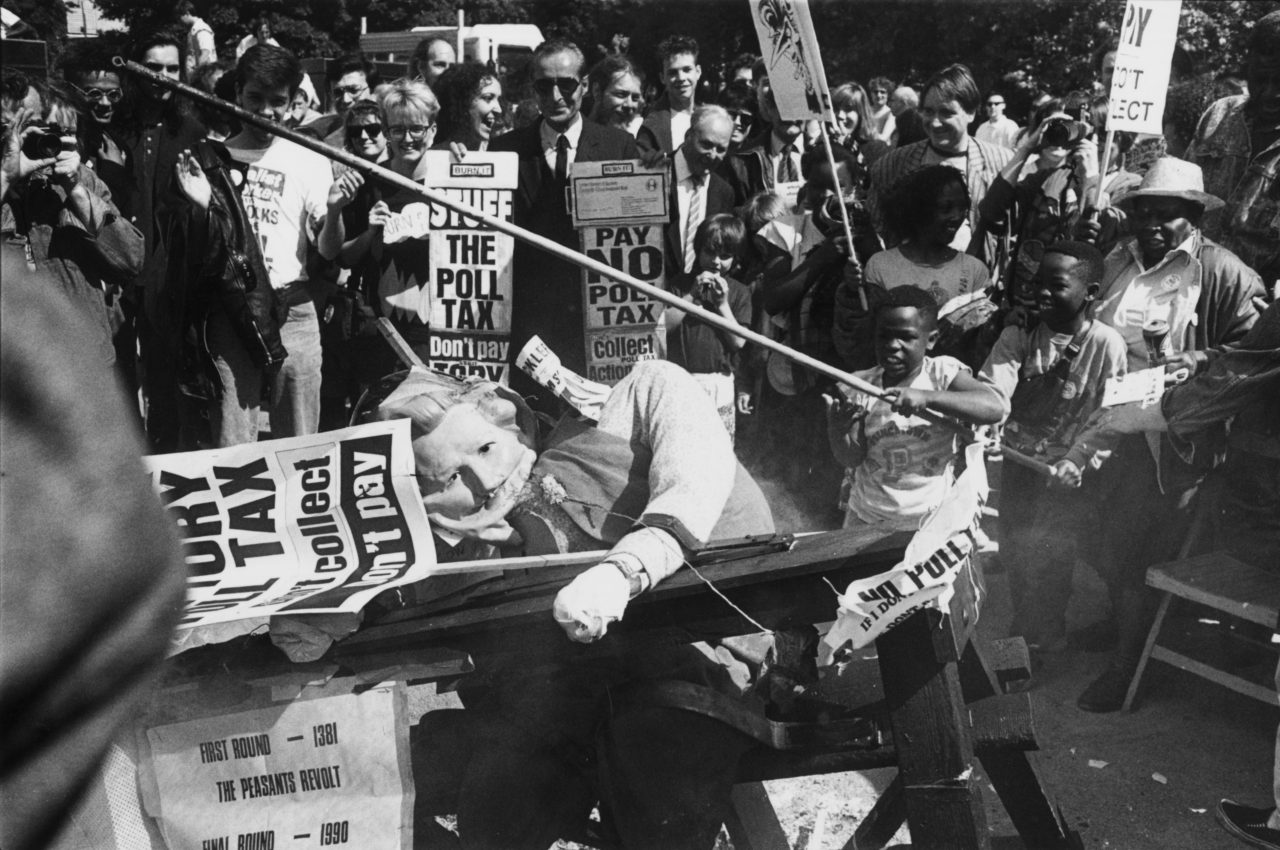 A child attacking an effigy of Margaret Thatcher during an anti poll tax demonstration in Hackney, London, 27th May 1990. (Photo by Steve Eason/Hulton Archive/Getty Images)

Demonstrations against the Community Charge system swept the UK, culminating in violent rioting across central London in March 1990, with the huge unpopularity of the policy widely regarded as having been a major factor behind the then-Conservative Prime Minister’s downfall.

A flagship policy which Thatcher believed would make the funding of local government more fair — pointing out that under the previous ‘rates’ system, an old woman living on her own could be forced to pay more than a household of multiple income earners living in a slightly smaller house — the poll tax generated fury from students and the political left, with protests resulting in more than 100 people injured.

Greening’s reference to the poll tax came after a warning from Labour frontbencher Barry Gardiner that holding a second referendum on EU membership — a proposal favoured by globalist figures including Tony Blair and George Soros — would undermine faith in democracy and could possibly prompt civil disobedience.

BORIS MAKES HIS MOVE: Chequers Plan a ‘Fix’, May Has ‘Not Even Tried’ to Deliver Brexit https://t.co/aAlyWZFt0u

As it stands, the Chequers plan will certainly anger many Brexiteers who feel it in no way respects the spirit of the referendum vote, as well as Remain supporters, who do not want Britain’s relationship with the EU to change, and so gives a wide variety of politically engaged voters across the country common cause to despise the Prime Minister.

On a trip to Brussels, Brexit-backing Tory MP Jacob Rees-Mogg reported he found himself “in greater agreement” with Michel Barnier, the EU’s chief Brexit negotiator, than with the government over plans for Britain’s withdrawal.

“He and I found considerable agreement that Chequers is complete rubbish and we should chuck it and have a Canada-style free trade deal. It is very encouraging,” said the Eurosceptic MP, according to The Times.

Sky News reported that Downing Street was “in fear” of Boris Johnson after the former Foreign Secretary used his Daily Telegraph column to argue May’s floundering Brexit plan would mean “disaster” for Britain, leaving the country with “diddly squat”.