French president Emmanuel Macron has painted swathes of anti-tax-hike protesters as violent amid calls for his resignation over his ‘progressive’ policies.

The French leader made the comments after the eighth day of action by the ‘Gilets Jaunes’ — Yellow Vests or Yellow Jackets — who have been staging protests on streets across France against a sharp rise in fuel taxes, wearing the signature yellow vests of French drivers.

The BBC reports that on Saturday, some 100,000 protesters took part in events across the country. Most were peaceful, apart from reports of violence at an 8,000-person march in the capital, Paris. 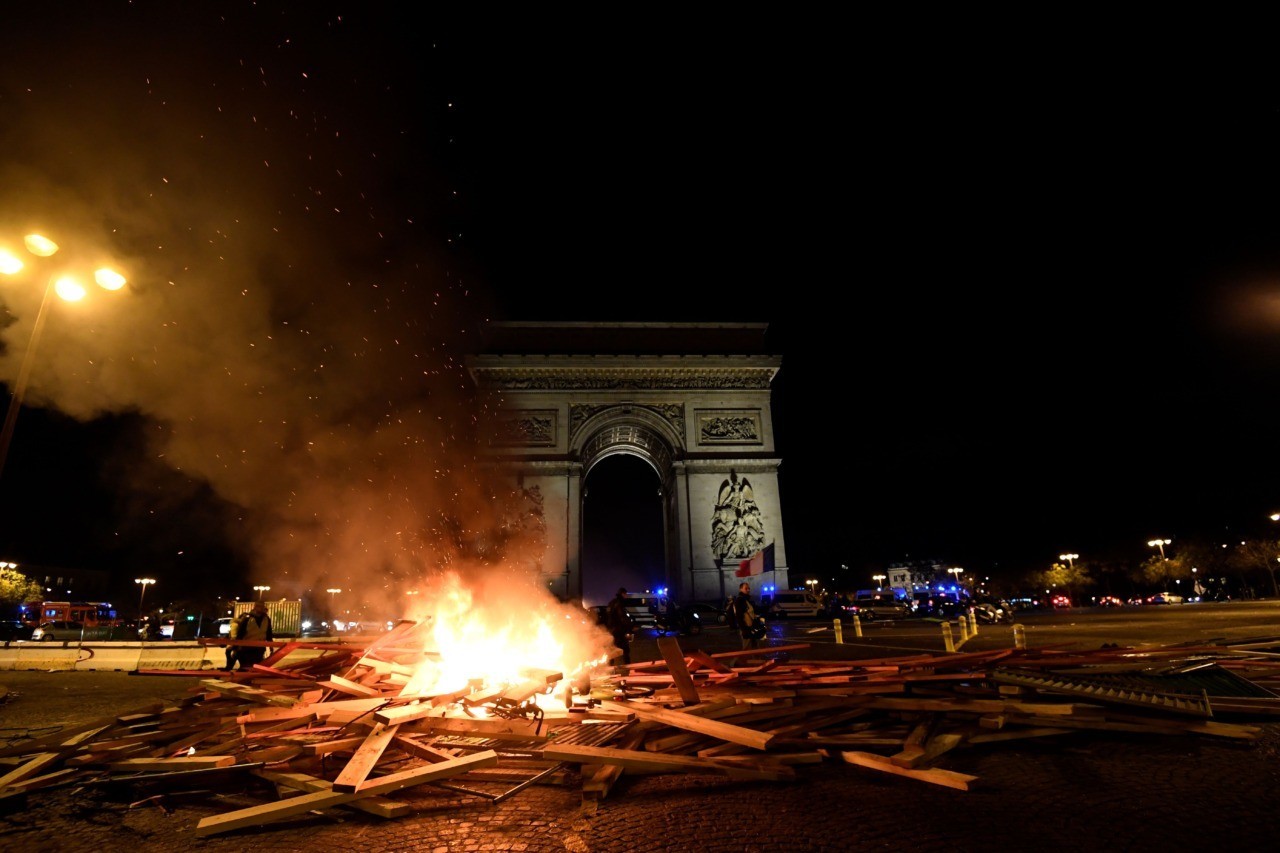 Material burns during a protest of the yellow vest (yellow vest) movement against rising oil prices and living costs as night falls, at The Arc de Triomphe on the Champs Elysees in Paris, on November 24, 2018. – Security forces in Paris fired tear gas and water cannon on November 24 to disperse protesters. Several thousand demonstrators, wearing high-visibility yellow jackets, had gathered on the avenue as part of protests which began on November 17, 2018. (Photo credit BERTRAND GUAY/AFP/Getty Images)

Macron’s plans to further increase taxes by 6.5 euro-cents on diesel and 2.9 euro-cents on petrol in the new year was seen as the catalyst for the first protests last week.

However, the protests have evolved to focus on not just fuel prices, but against the cost of living in rural areas and other policies, with protesters calling Macron the “president of the rich.”

Despite some reported violence against emergency services and media, the French people are backing the Yellow Vests in large numbers.

Breitbart London reported Sunday that the Gilets Jaunes are supported by eight in ten Frenchmen. Of those questioned whether they thought the group was ‘inherently violent,’ 62 per cent said they refused to believe so, while 77 per cent said they were “brave,” and 78 per cent said the protesters worked for the “common interest.” 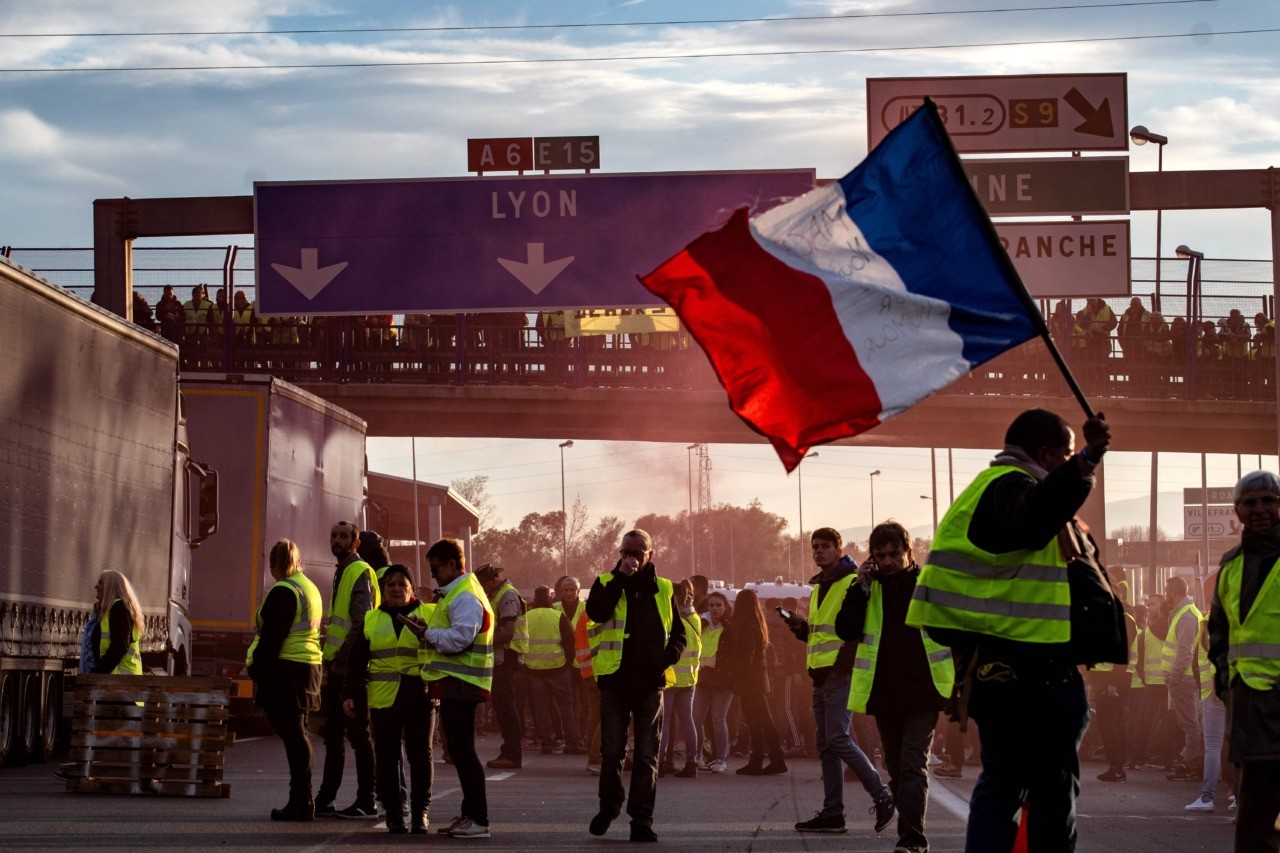 A “Yellow Vest” (Gilets Jaunes in French) protester waves a French flag on the A6 motorway in Villefranche-sur-Saone on November 24, 2018, during a demonstration against high fuel prices and living costs.  (Photo by JEFF PACHOUD/AFP/Getty Images)

Neither President Macron, who said he would rule France like a Roman god, nor his government has reached out to the group, showing a growing distance between the leader and the populace, with the president’s approval rating recently falling to just a 25 per cent.

Macron’s allies are worried about the “crisis,” calling it a “movement without precedent.”

“We’ve got to go to these citizens who feel they are completely shut out of politics,” Nicolas Démoulin, a National Assembly member from Macron’s La République en Marche (LREM/Republic on the Move) party said.

Indeed, Jean-Yves Camus from the Observatory on Political Radicalism referred to the Yellow Jacket protests as a “populist”-style revolt being mobilised through social networks rather than being led by political parties.

“This is really a populist-type movement, and it’s an extremely strong protest against elite France,” Camus added.

Macron said later on Saturday that France was in a “moral crisis” — but again laid the blame for the crisis on protesters, who he accused of “demagogy.”

While there have been calls for Macron to resign, the president is expected to defend his green taxation plans next week. 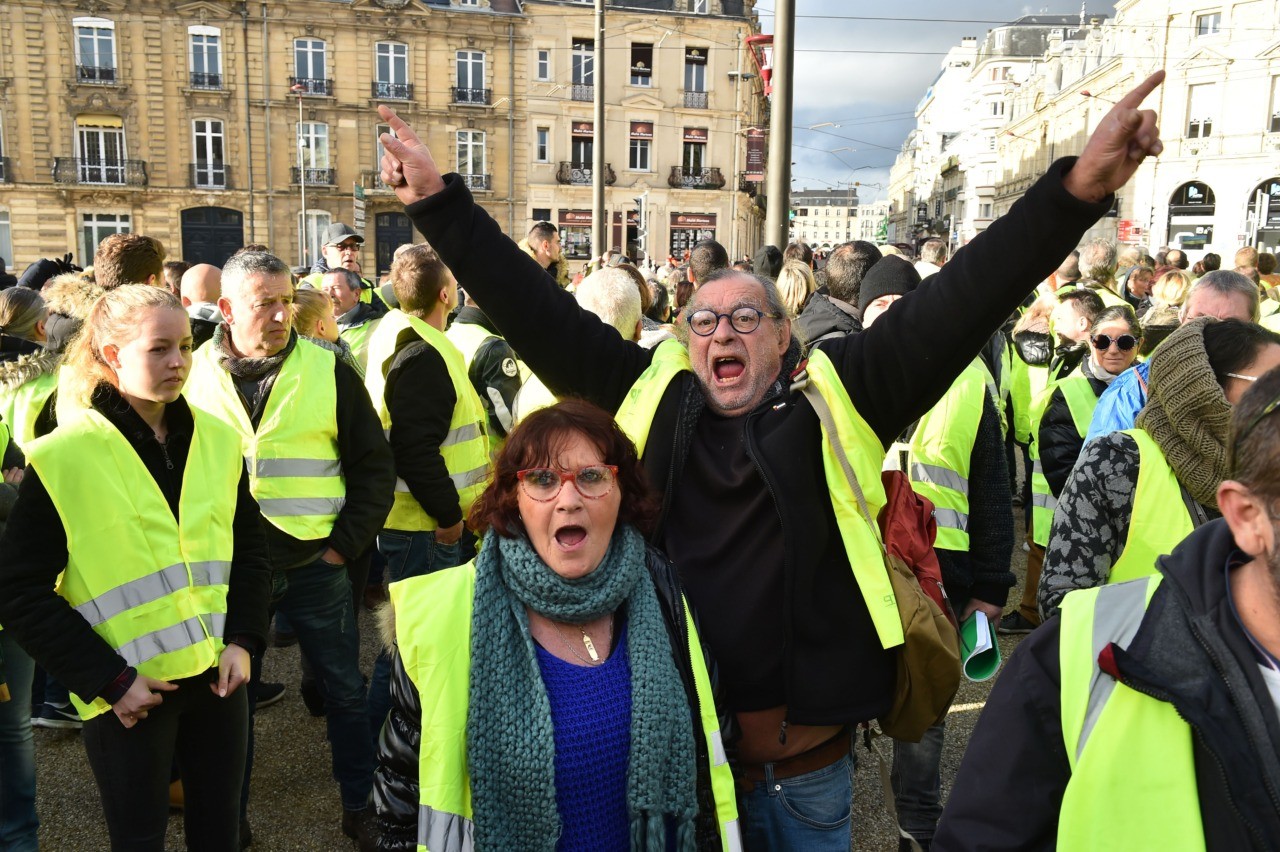