One female protester has died in France after a woman drove into a crowd blocking the road, the driver allegedly in a panic as she was trying to get to daughter to the hospital.

Interior Minister Christophe Castaner confirmed that there has been a fatality at a protest in Point-de-Beauvoisin, in the south-eastern region of Savoy, reports Le Parisien.

The victim was hit after a woman drove into a group of some 50 “Yellow Vest” protesters who were blocking the road on Saturday morning.

The BBC reports that the woman was desperate to get her daughter to the hospital and was sent into a panic as protesters surrounded her car and began hitting her roof. She then accelerated her car into the crowd. She was later taken into custody, said to be in a state of shock. 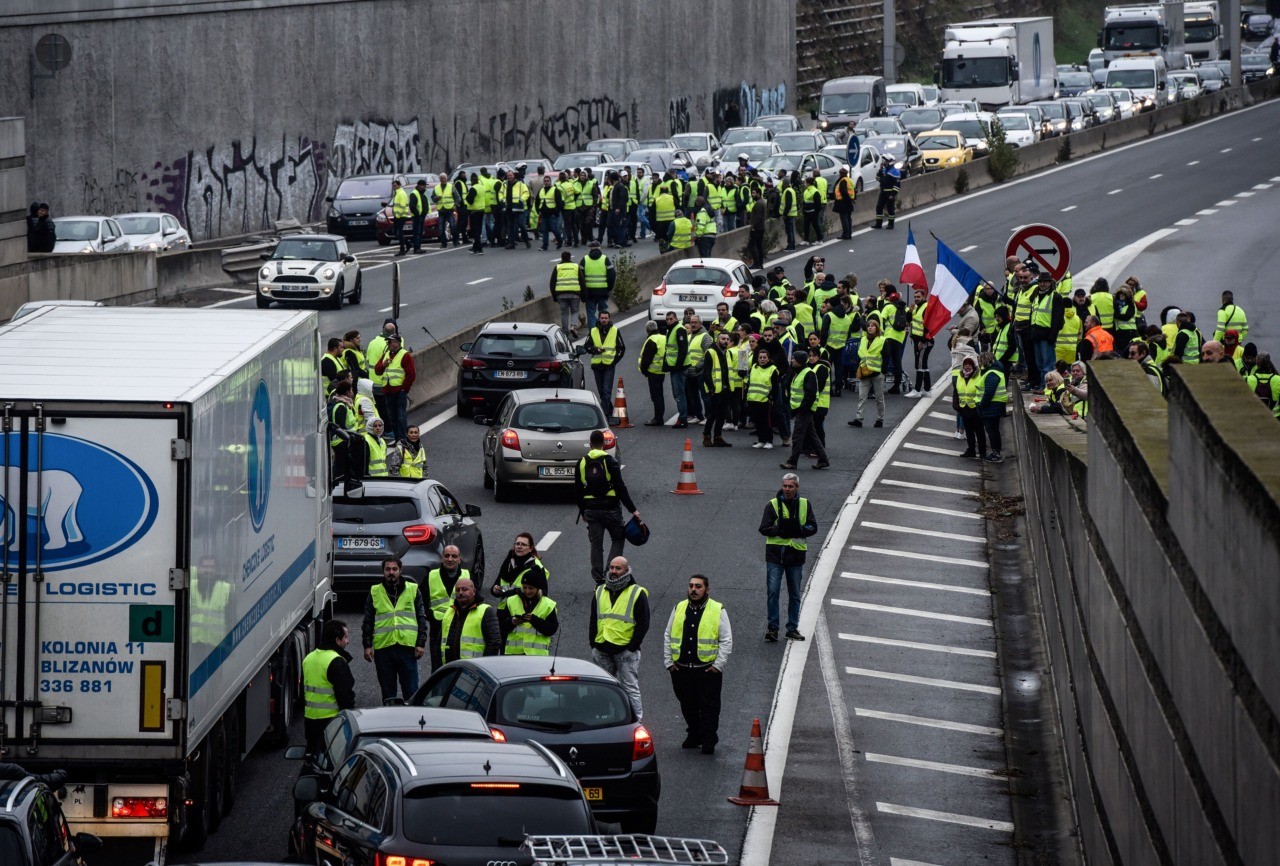 Demonstrators block the traffic on the highway A47 between Lyon and Saint-Etienne on November 17, 2018, as part of a nationwide popular initiated day of protest called “yellow vest” (Gilets Jaunes in French)movement to protest against high fuel prices which has mushroomed into a widespread protest against stagnant spending power under French President.  (Photo by JEAN-PHILIPPE KSIAZEK / AFP)

Media reports that there have been some 50 other injuries across the country, including in the northern region of Arras where a 71-year-old man was hit by a car. In the northern town of Hazebrouck, a lorry driver mounted a pavement and injured two protesters.

In what is possibly the largest coordinated protest against President Emmanuel Macron’s reforms since he took office 18 months ago, media reports that between 1,000 and 2,000 rallies have been organised across the country on Saturday with between 50,000 to 120,000 people in attendance.

Wearing the safety hazard jackets drivers are mandated by law to carry in their car, “Yellow Vests” are protesting the 23 per cent rise in diesel to €1.51 (£1.32/$1.71) per litre — the increase coming in a span of just 12 months and at its highest point since the early 2000s. 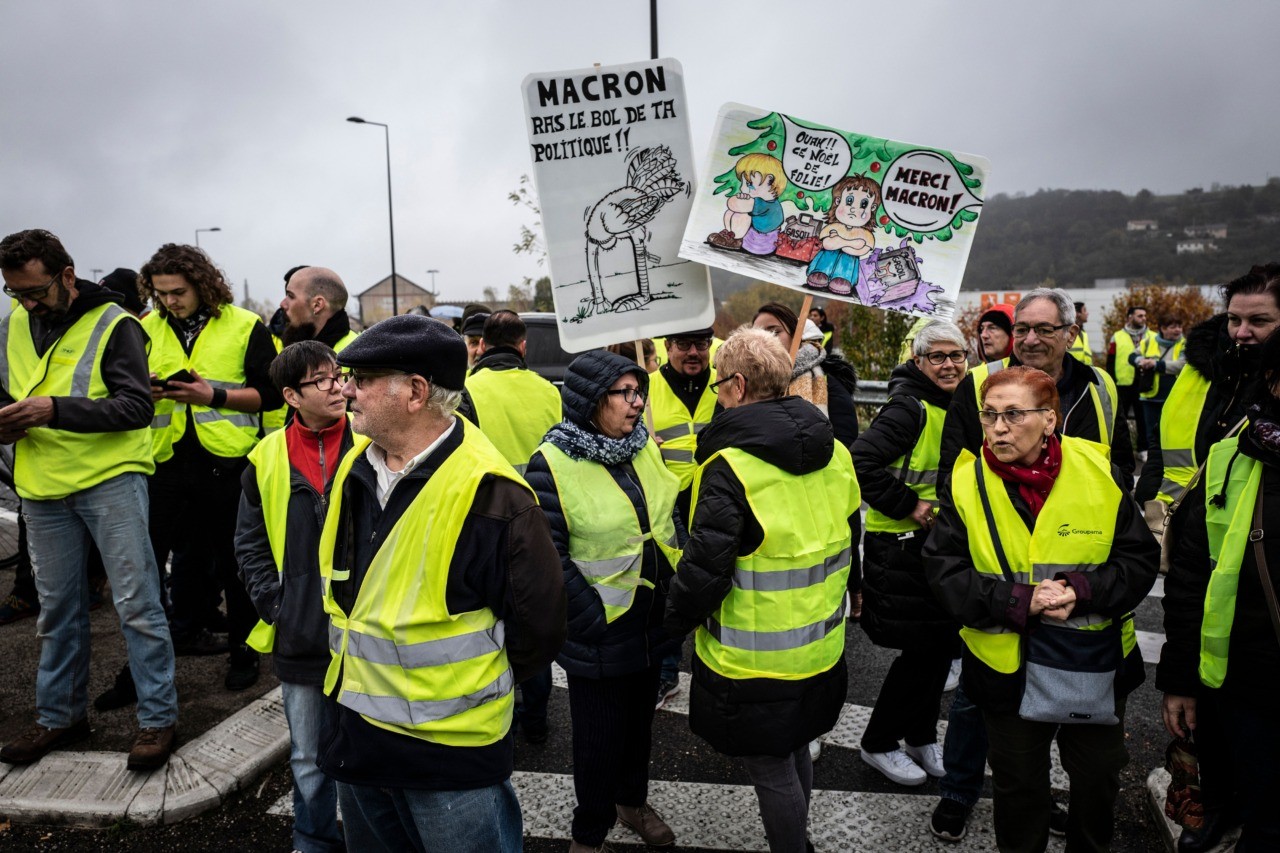 Demonstrators wearing yellow vests (Gilets Jaunes) protest against the rising of the fuel and oil prices on November 17, 2018 in front Carrefour Market in Givors, East-central France – French drivers seething over high fuel prices have vowed to snarl traffic across the country on November 17 in a widely supported protest that could prove the trickiest so far for French President. (Photo by JEAN-PHILIPPE KSIAZEK / AFP)

While President Macron puts three-quarters of the rise down to the increased cost of oil, protesters blame the president’s anti-pollution policies and accuse him of disregarding the concerns of “the little people,” with the tax hike hurting those in rural and suburban areas the most, affecting the metropolitan elites the least.

“Nobody thinks about the people on the city fringes, in the provinces, in rural areas,” Priscillia Ludosky told AFP.

“They tell them to use alternative transportation but the reality is that’s not possible. They have no other choice but to pay up,” she added.

“Macron is the president of the rich and not the poor. He needs to think about the poor as well,” André, another protester, told the French news agency.

The tax hike is so widely unpopular, that even 54 per cent of those who voted for Macron support the movement, with 73 per cent of Frenchmen of all political persuasions supporting the Yellow Vests.

While Macron, whose popularity is hovering around a dismal 30 per cent, said he regretted that he was not able to reconcile his government with the people, he has refused to back down, saying, “We have to tax fossil fuels more in order to fund our investments in renewables.”

His government spokesman Benjamin Griveaux then poured scorn on protesters, saying that “people who smoke and drive diesel cars” are “not the France of the 21st century.” 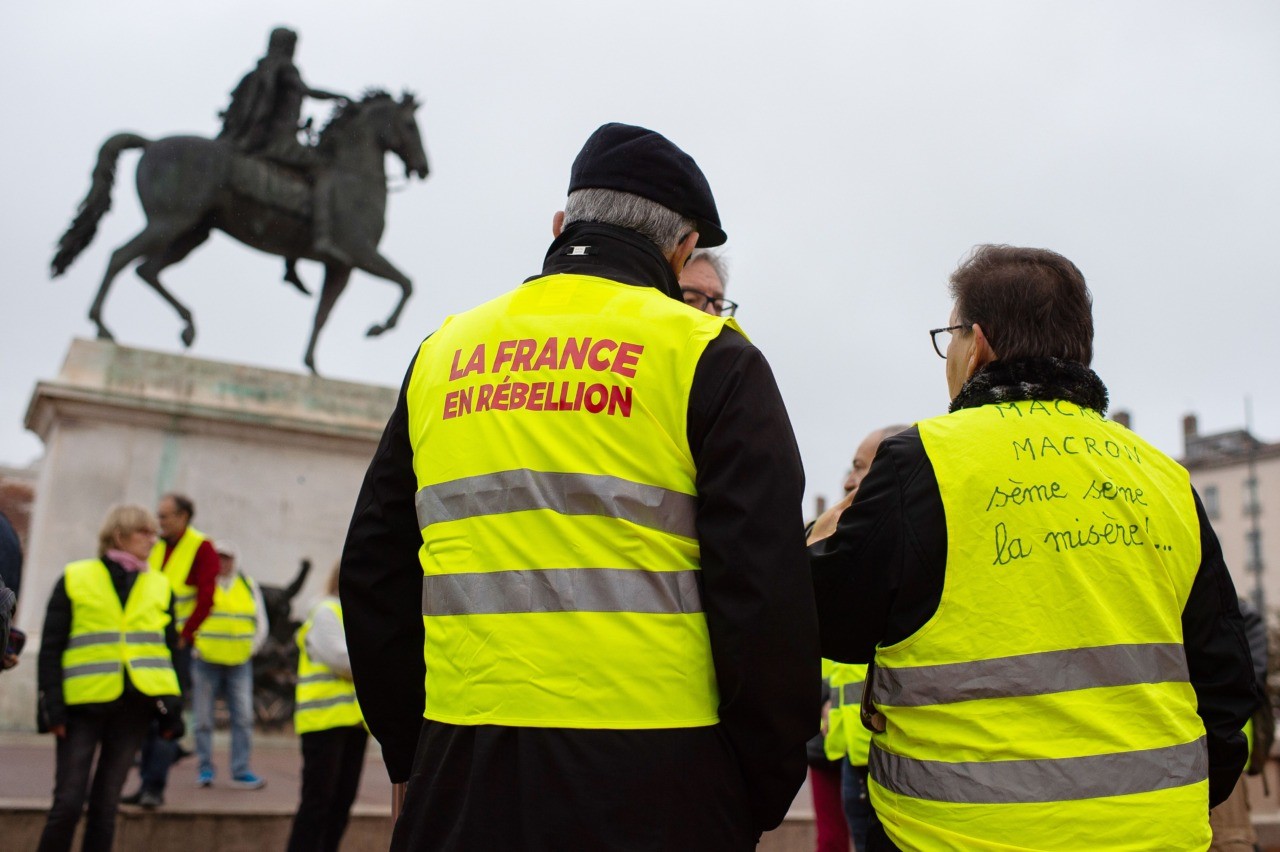 People gather in Lyon’s landmark Place Bellecour square on November 17, 2018 in Paris, during a nationwide popular initiated day of protest called “yellow vest” (Gilets Jaunes in French) movement to protest against high fuel prices which has mushroomed into a widespread protest against stagnant spending power under French President.(Photo by ROMAIN LAFABREGUE / AFP) 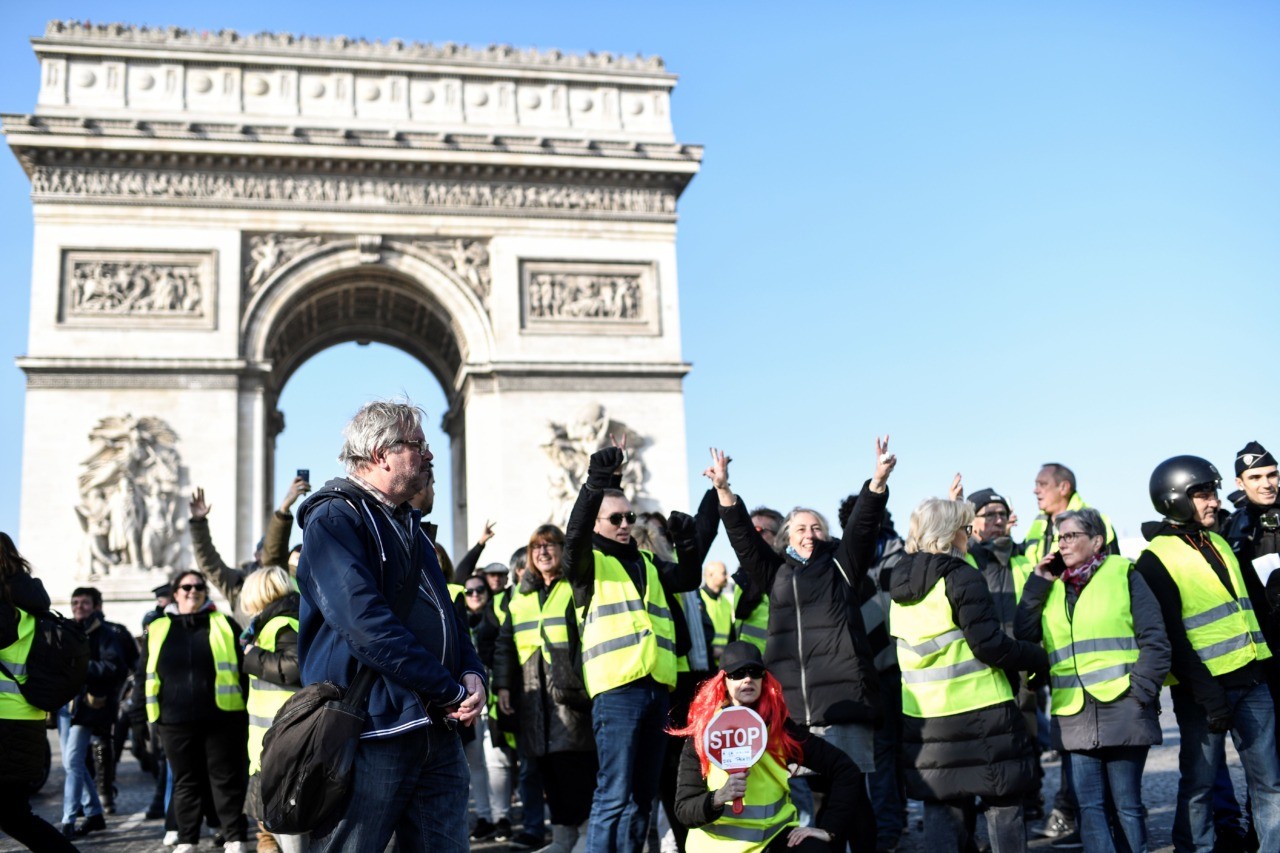 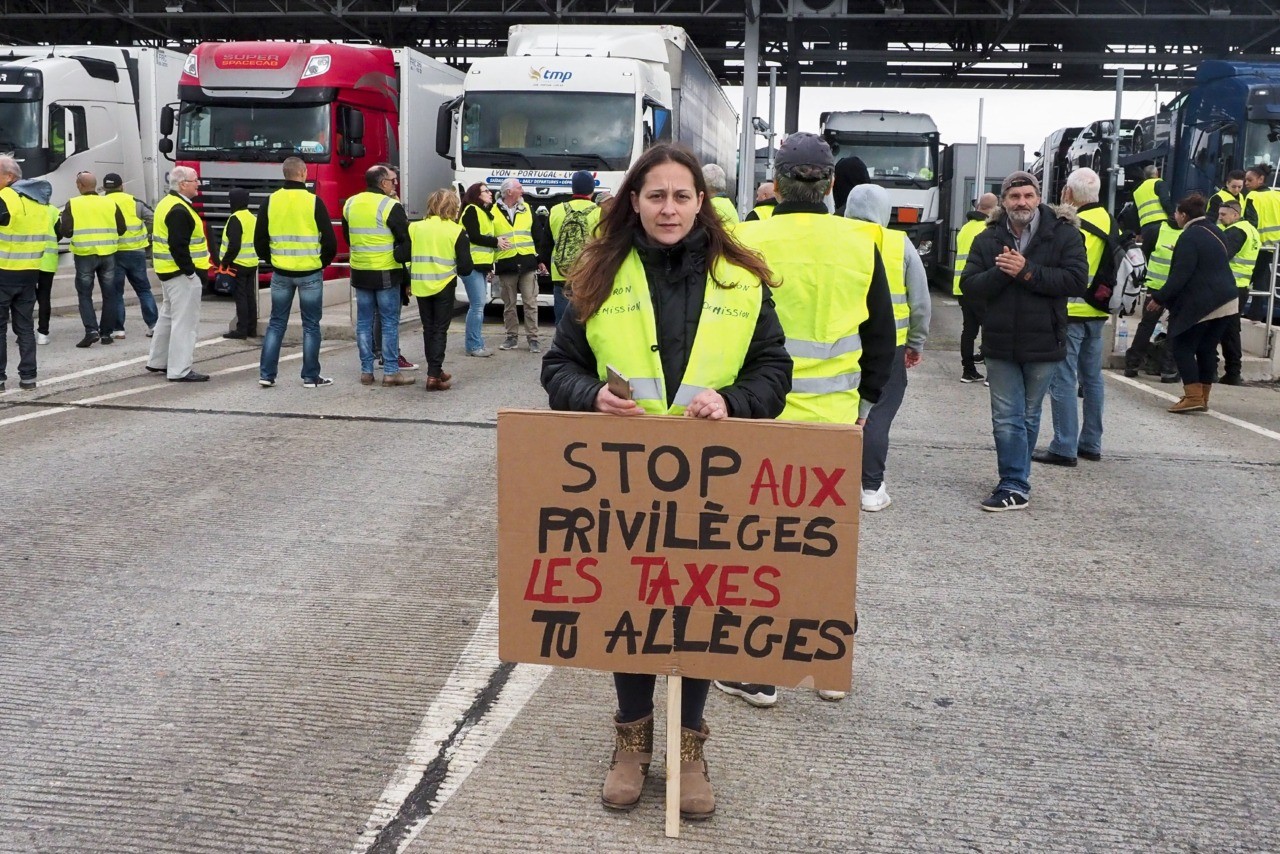 Leticia Leclercq, unemployed mother of two, holds a banner reading “Stop privileges, lower the taxes” during a demonstration of Yellow Vests (Gilets Jaunes) against the rising of the fuel and oil prices on November 17, 2018, in Le Boulou near the border with Spain. – Leticia joined the Yellow Vests movement to protest against “the rise of tax on gas and her difficulties making ends meet every month”. (Photo by RAYMOND ROIG / AFP)