Hundreds of thousands of protestors all over France have been demonstrating for the last eight days. Mostly the protests have been peaceful if disruptive, but some like the ones in Paris have turned violent.

The police have used tear gas and water cannon; there have been dozens of arrests and at least two deaths. But amid the misery and mayhem, there’s one small crumb of consolation: these protestors could be ringing the death knell for the green tyranny which has held the West in its thrall for the last four decades.

Unlike the rabble of UK eco-activists who’ve been irritating Londoners over the last couple of weekends (blocking traffic; gluing themselves to the doors of government buildings; trying to get arrested), the protestors in France think environmentalism is the problem, not the solution. 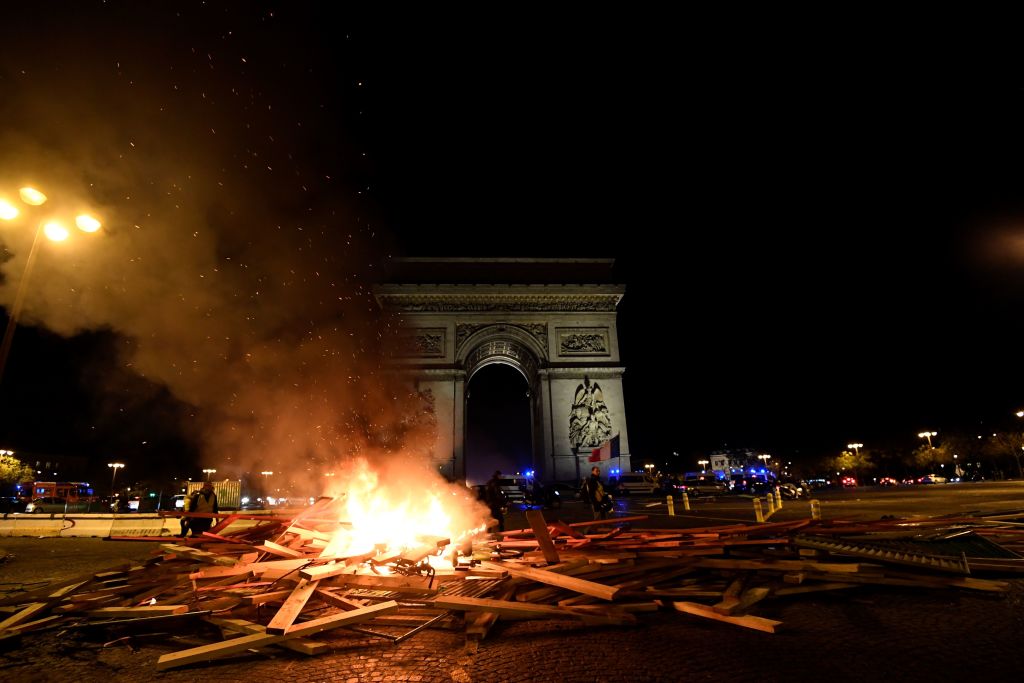 Material burns during a protest of the yellow vest (yellow vest) movement against rising oil prices and living costs as night falls, at The Arc de Triomphe on the Champs Elysees in Paris, on November 24, 2018. / BERTRAND GUAY/AFP/Getty Images

Known as the “gilets jaunes” – named after the hi-vis fluorescent yellow waistcoats that all French motorists own because they are required to do so by law – the protestors are rioting against President Macron’s green policies. Specifically, they object to the government’s carbon tax and its attempts to price drivers off the road with higher fuel costs.

Here is the background:

The gilets jaunes are a grass-roots revolt against high fuel prices, and they threaten to paralyse France on Saturday.

The cause of the price hikes are “eco taxes” meant to dissuade the French from using cars. “We choose to tax pollution and harmful products rather than workers,” budget minister Gérald Darmanin explains. Yet the fuel taxes penalise the poor disproportionately.

In the hope of deflating the protests, prime minister Édouard Philippe on Wednesday announced €500 million of compensatory measures, including a €5,000 bonus for low-income earners who trade in polluting cars for a hybrid model.

The gilets jaunes have organised at least 630 protests nationwide via the blocage17novembre.com website, designed by an 18-year-old student. Some call for go-slows on highways. Others want to block roads, which is punishable by two years in prison and a €4,500 fine. Interior minister Christophe Castaner says no “total blockage” will be tolerated.

But several police unions have expressed sympathy, and promised not to punish petty or “middle-size” offences “out of solidarity with the citizens”.

The movement has found an unlikely symbol in Jacline Mouraud, a 51-year-old accordion player, hypnotist and spiritual medium from Brittany who on October 18th posted a video message hectoring President Emmanuel Macron for “persecuting drivers”.

Mouraud’s video went viral, and has been viewed by more than six million people. “I have a thing or two to tell you,” she starts out. The stream of accusations includes the price of fuel, the “hunt” for diesel vehicles, the “forest” of radars [speed cameras], the number of traffic tickets, the possibility tolls may be charged to enter large towns and rumours of mandatory bicycle registration.

“What are you doing with the dough, apart from changing the china at the Élysée and building a swimming pool?” Mouraud asks Macron.

A senior adviser to Macron spoke scathingly of “this Madame Mouraud who generates spirits from under her fingernails”. He expressed consternation that a video “stuffed with lies” has reached such a wide audience, saying: “I have the feeling that our democracy is also at stake.”

That French official quoted at the end is right to fear that “democracy is also at stake.” But not in quite the way he imagines.

For decades, the liberal establishment which runs the Western nations has used green issues – climate change, especially – as an excuse to hike taxes and regulation while adopting the guise of environmental righteousness. But the state’s ability to go on achieving this will depend a) on the public’s willingness to go on believing that the climate is a man-made problem which can be solved by government intervention and b) the public’s tolerance for higher and higher prices.

Greenies: this may be the beginning of the end for your eco-fascist religion. How typical that the revolution should have started in France… 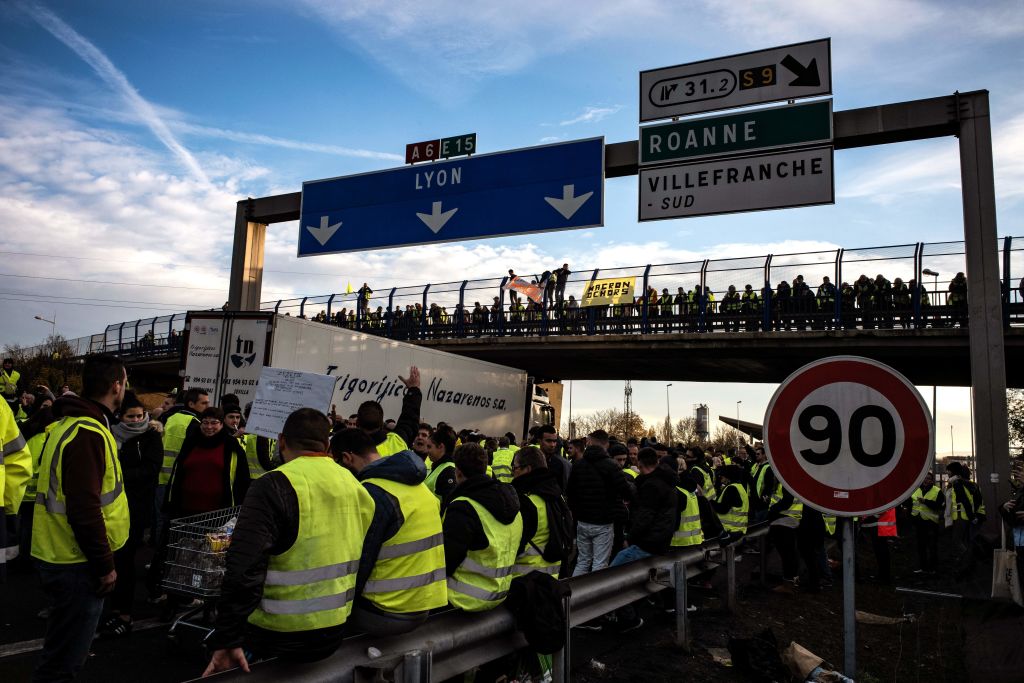 “Yellow Vest” (Gilets Jaunes in French) protesters take part in a demonstration on the A6 motorway in Villefranche-sur-Saone on November 24, 2018, to protest against high fuel prices and living costs. / JEFF PACHOUD/AFP/Getty Images