This story is receiving regular updates below the opening passages.

The clashes on the famous avenue leading to Napoleon Bonaparte’s iconic Arc de Triomphe come as Macron is in Argentina for the G20, threatening to disrupt a planned trade deal between the European Union and South America’s Mercosur bloc over a disagreement with Brazil’s new president Jair Bolsonaro — dubbed the “Trump of the Tropics” — over a disagreement on climate change. 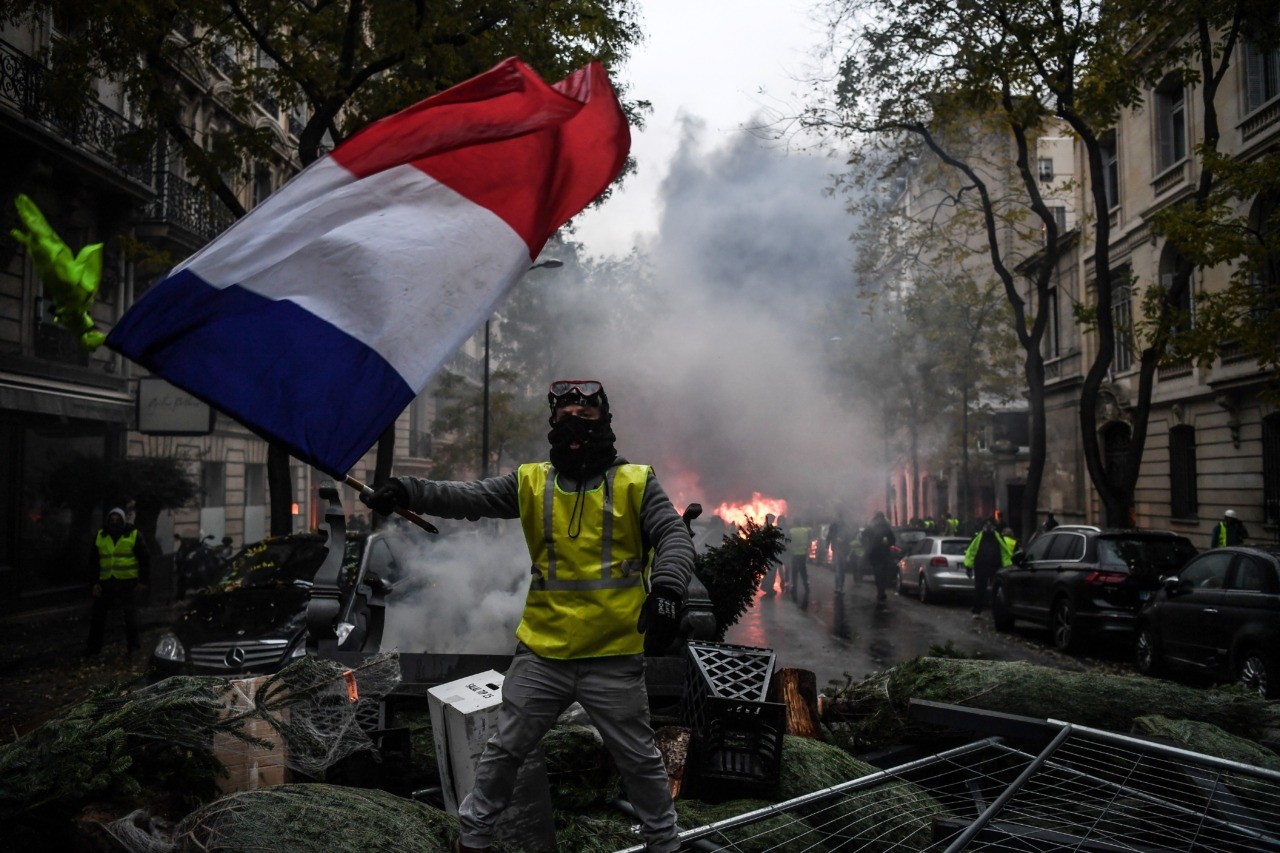 A demonstrator holds a French flag during a protest of Yellow vests (Gilets jaunes) against rising oil prices and living costs, on December 1, 2018, in Paris. (Alain JOCARD / AFP)

The globalist poster boy’s “green” policies are running into substantial opposition at home, however, with the “Yellow Jackets” movement which has united the anti-establishment left with the populist right in a loose, seemingly leaderless coalition in defence of the French working class bringing the presidency of the man who once boasted he would govern “like Jupiter” to the brink. 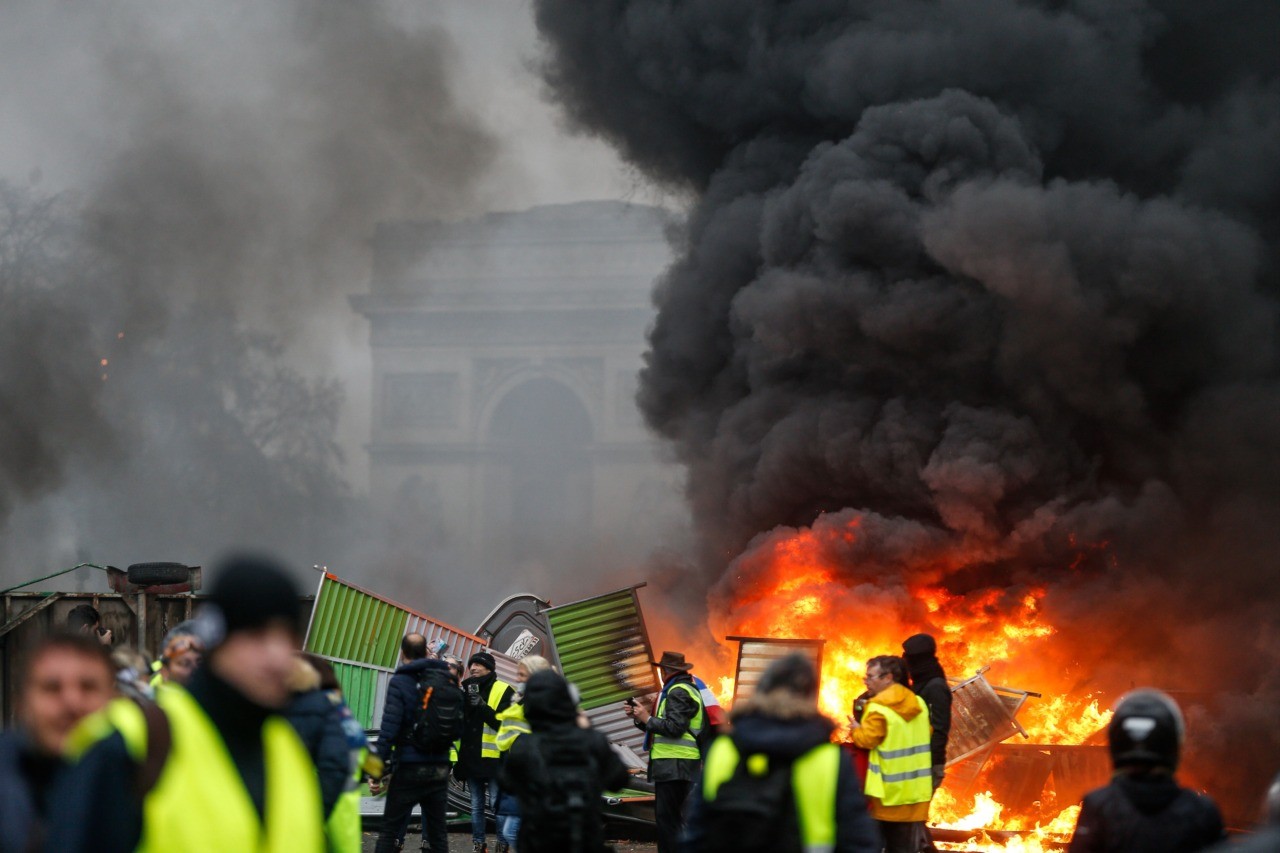 Speaking at the Paris police’s command centre, French Prime Minister said 36,000 people were protesting across France, including 5,500 in the capital for this 3rd nationwide day of blockade and demos. (GEOFFROY VAN DER HASSELT/AFP/Getty Images)

Over a hundred people have already been arrested, with the authorities complaining of around 1,500 “agitators” among the protesters.

“There’s a lot of incitement on social media and we are expecting excess and violence,” remarked David Michaux, of the UNSA Police union.

VIDEO: On a third day of unrest, clashes between "yellow vest" protesters and riot police break out on the Champs-Élysées in Paris pic.twitter.com/WJUjgTPrW7

French police are struggling to regain the upper hand against violent “Yellow Jacket” protesters in central Paris and are spraying protesters with water cannon.

The protesters angry over rising taxes and the high cost of living sprayed graffiti on the Arc de Triomphe, torched at least one car, and broke through the metal fence of the Tuileries gardens. French television showed police leading a shaken woman away from the protesters, and loud bangs rang out near the Champs Elysees where the violence was centred.

Central Paris was locked down by Saturday afternoon, with all roads leading away from the arc closed off as more police moved in. Police said at least 224 people have been arrested in Saturday’s riot in the French capital.

At least 65 people have been injured and 140 arrested after violent clashes in Paris between police and protesters angry about rising taxes https://t.co/jfPp8nMi8B pic.twitter.com/WG0u0IuwlN

Police union officials have told Reuters that protestors have “stolen an assault rifle from a police vehicle” in Paris, but details remain sketchy.

Law enforcement now say the number of injured in the French capital is up to 80, including 16 police officers, with 183 people under arrest.

Paris police say that at least 65 people including 11 police officers have been injured in violent protests in the French capital. Police also say that 140 people have been arrested. 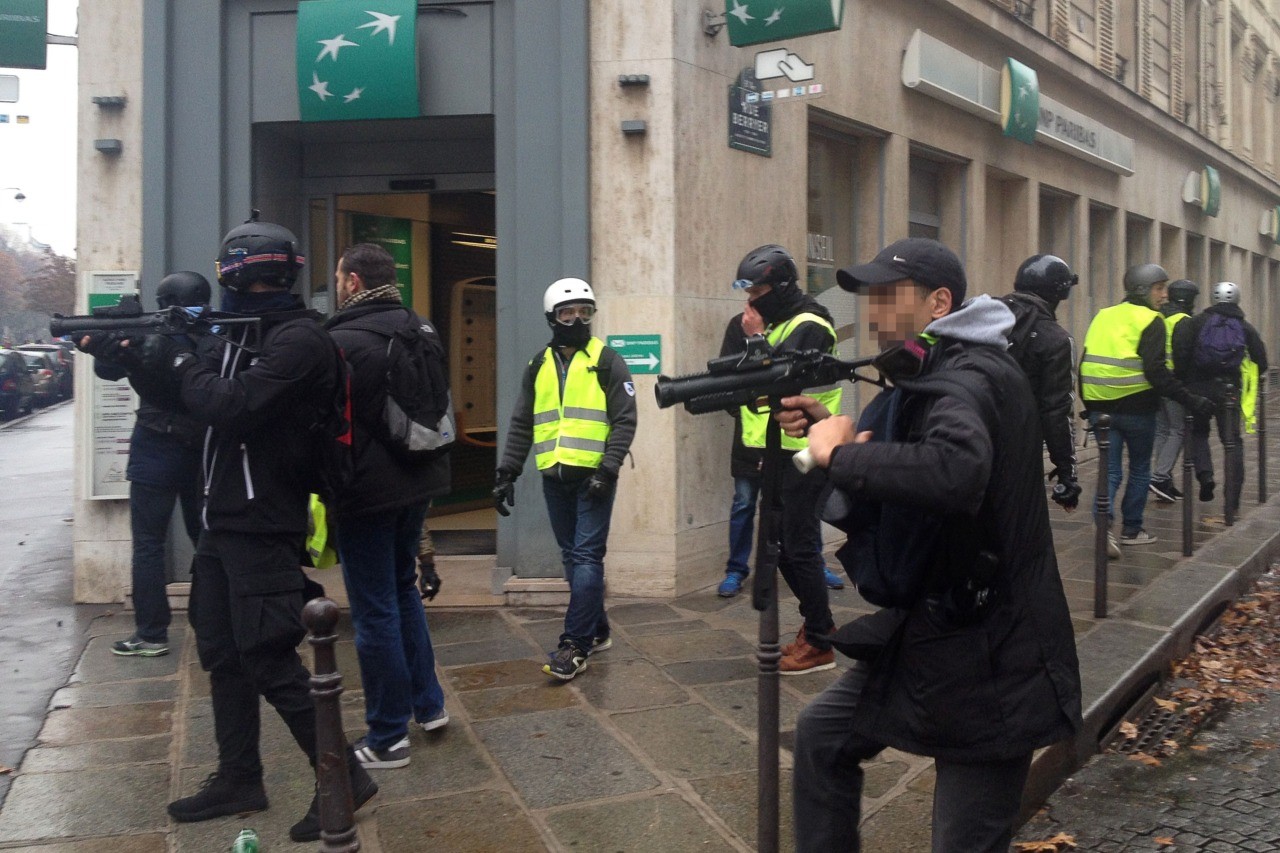 Riot police members and plainclothes policemen secure the area after evacuating a demonstrator during a protest of Yellow Vests (Gilets jaunes) against rising oil prices and living costs near the Champs Elysees in Paris, on December 1, 2018. (EMMANUEL PEUCHOT/AFP/Getty Images)

Dutch police have closed off the parliamentary complex in The Hague after about 100 yellow jacket protesters gathered outside.

As the fuel price protest that began in France last month spread to another country, Dutch demonstrators on Saturday gathered outside the historic parliamentary buildings to protest government policies.

After the demonstrators initially refused police efforts to move them to a nearby park, officers blocked the archway leading into the parliament.

As some of the protesters melted away, police on horseback and in vans later shepherded the remaining yellow jackets away from Parliament.

Dutch media reported that two protesters were detained by police in The Hague and that another protest leader was detained in the southern city of Maastricht. Police in The Hague did not immediately return a call seeking confirmation.