For the fourth straight week, the Gilets Jaunes (Yellow Vest) movement has protested across France, with violence and vandalism erupting once again in Paris and spreading to cities across the country.

French police mobilised their entire force Saturday to quell the expected violence, deploying armoured vehicles on the streets of the French capital. 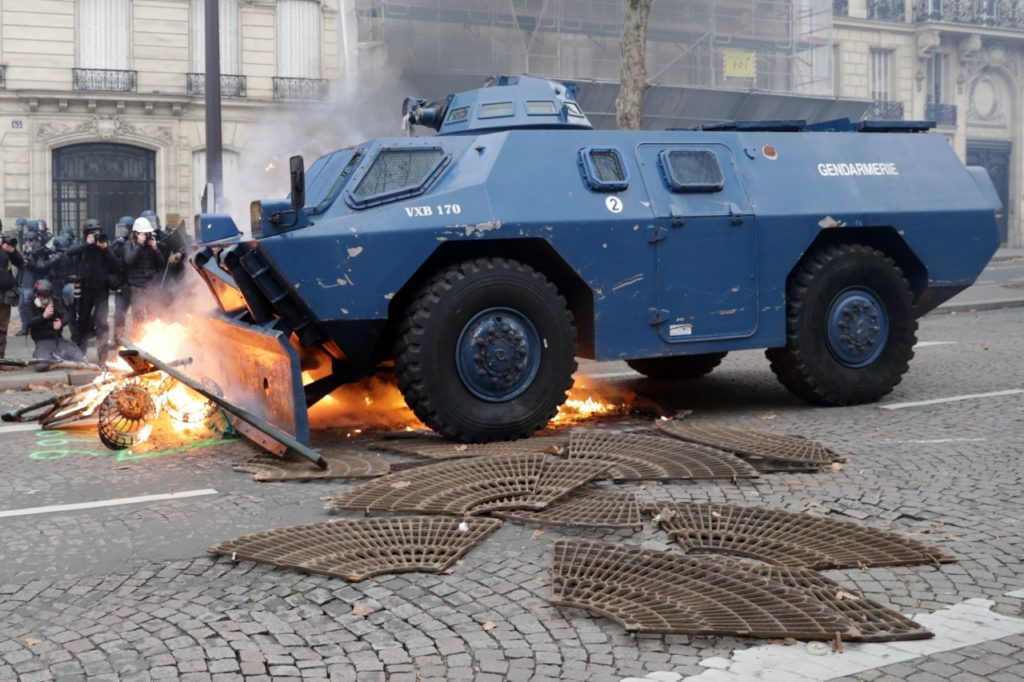 A Gendarmerie armoured vehicles (VBRG) drives past fire near the Champs Elysees avenue in Paris on December 8, 2018 during a protest of “yellow vests” (gilets jaunes) against rising costs of living they blame on high taxes. (Photo: THOMAS SAMSON/AFP/Getty Images)

While protests did not turn as intensely violent in Paris as the week before, over 700 Yellow Vest protesters were arrested by police and dozens of people required hospital treatment following clashes, including several riot police officers. 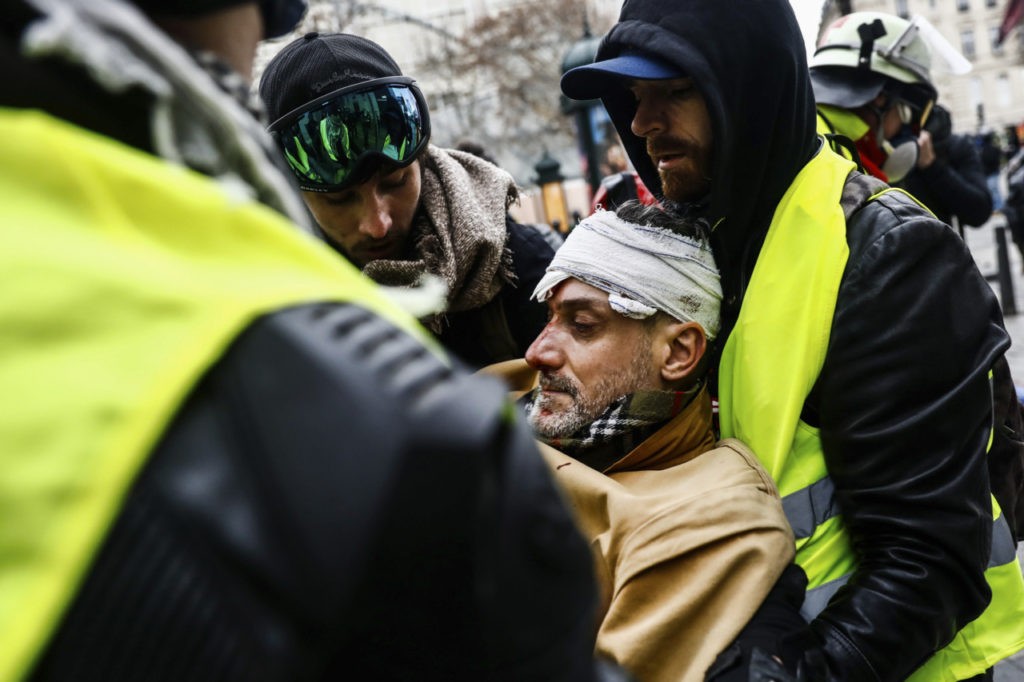 Protestors help an injured man near the Champs Elysees avenue in Paris on December 8, 2018, during a mobilisation against rising costs of living they blame on high taxes. (Photo: SAMEER AL-DOUMY/AFP/Getty Images)

According to Interior Minister Christophe Castaner, the total number of arrested across France reached 1,385, with 974 people being kept in police custody. In total, Castaner claimed that 125,000 people had taken part in the Yellow Vest protests across the country. 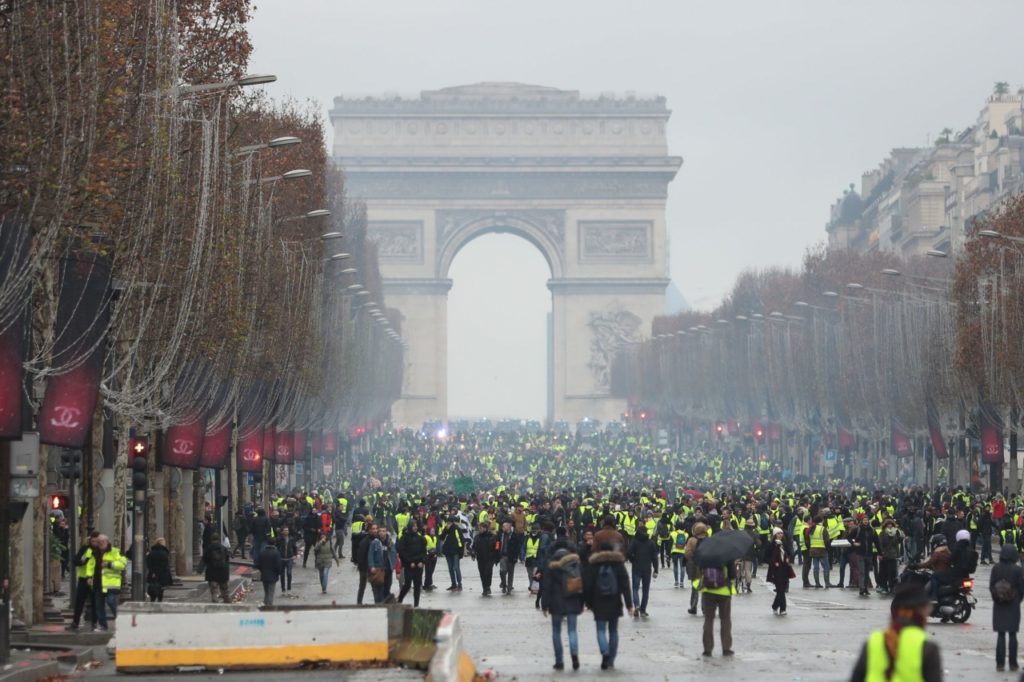 While the violence was not on the scale of the previous protest the week before, several cars were still set on fire in Paris and protestors once again clashed with riot police. 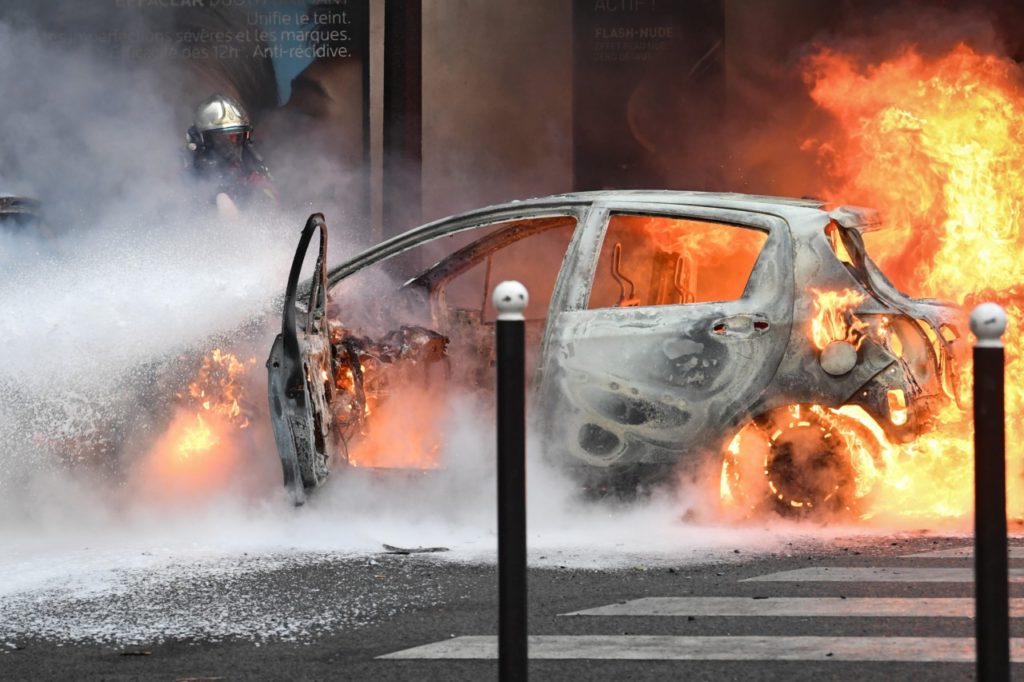 A firefighter stands next to a car set on fire during a protest of Yellow vest (Gilets Jaunes). (Photo: ALAIN JOCARD/AFP/Getty Images)

One difference this week, in contrast to prior weeks, was an escalation of violence in cities and regions outside of Paris. Violent clashes took place between protesters and the authorities, large fires were set, and barricades were erected in Toulouse, while in Bordeaux protestors threw Molotov cocktails at riot police. 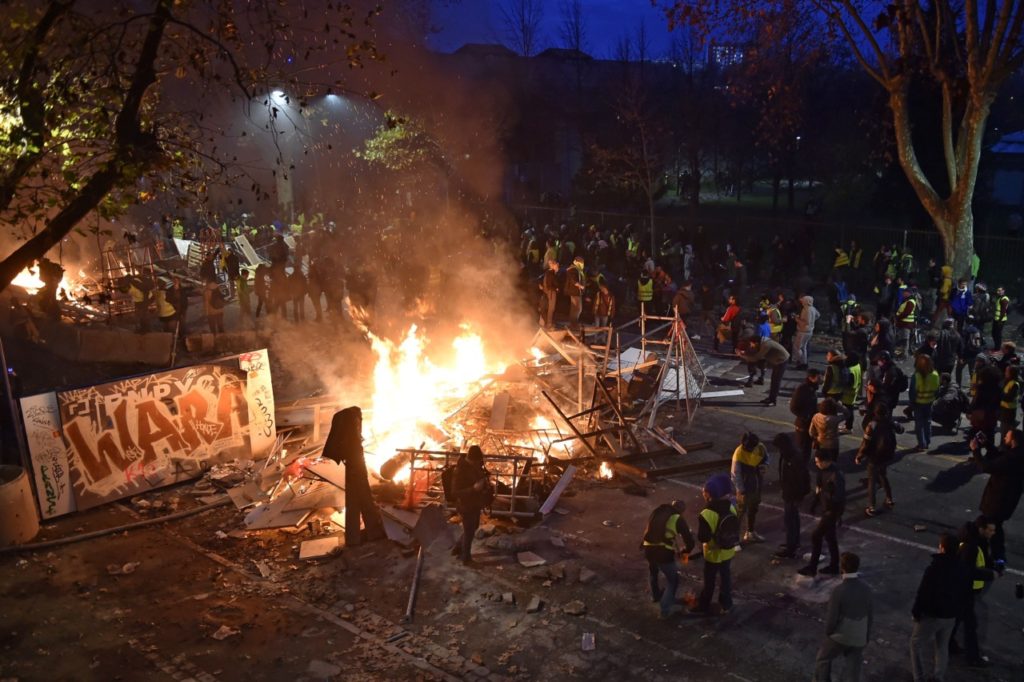 Protestors wearing a yellow vest (gilets jaunes) stand next to a burning barricade, during a demonstration of the Yellow Vest movement against rising costs of living they blame on high taxes in Toulouse, southern France. (Photo: REMY GABALDA/AFP/Getty Images) 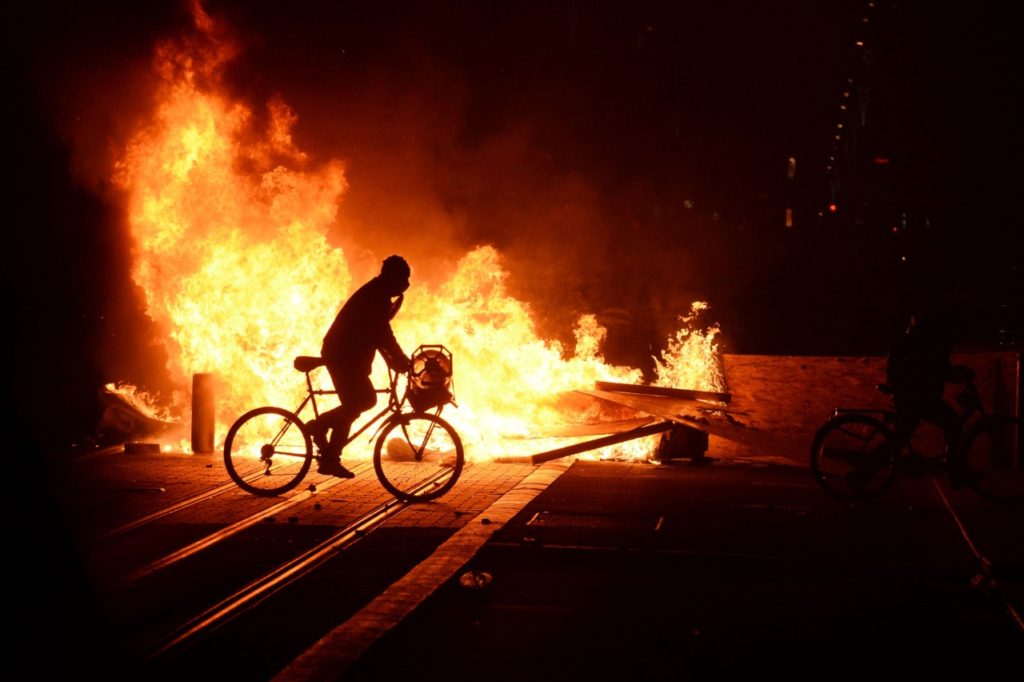 A person rides a bicycle near a fire on December 8, 2018, in Bordeaux, southwestern France. (Photo: NICOLAS TUCAT/AFP/Getty Images)

While the Yellow Vest protests began as a reaction to an increase in fuel taxes, the movement has not only become a general protest over taxes and cost of living, but also against globalism, the European Union, and the UN Global Compact for Migration. 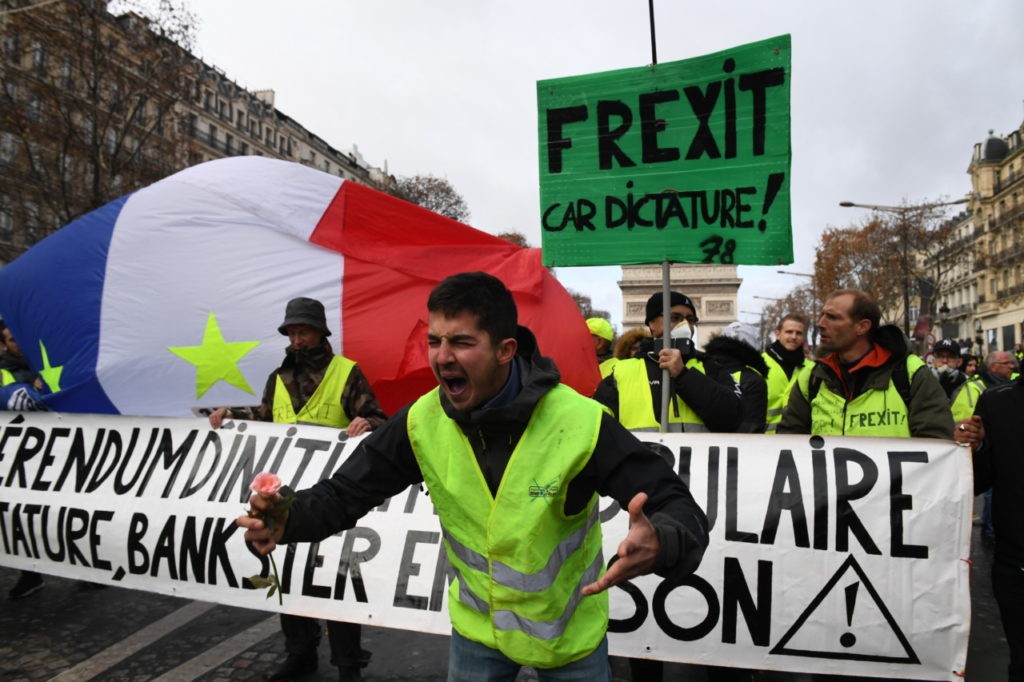 A demonstrator gestures in front of placards, one of which says ‘Frexit car dictature!’ during the demonstration of the yellow vests at the Arc de Triomphe in Paris France. (Photo: Jeff J Mitchell/Getty Images) 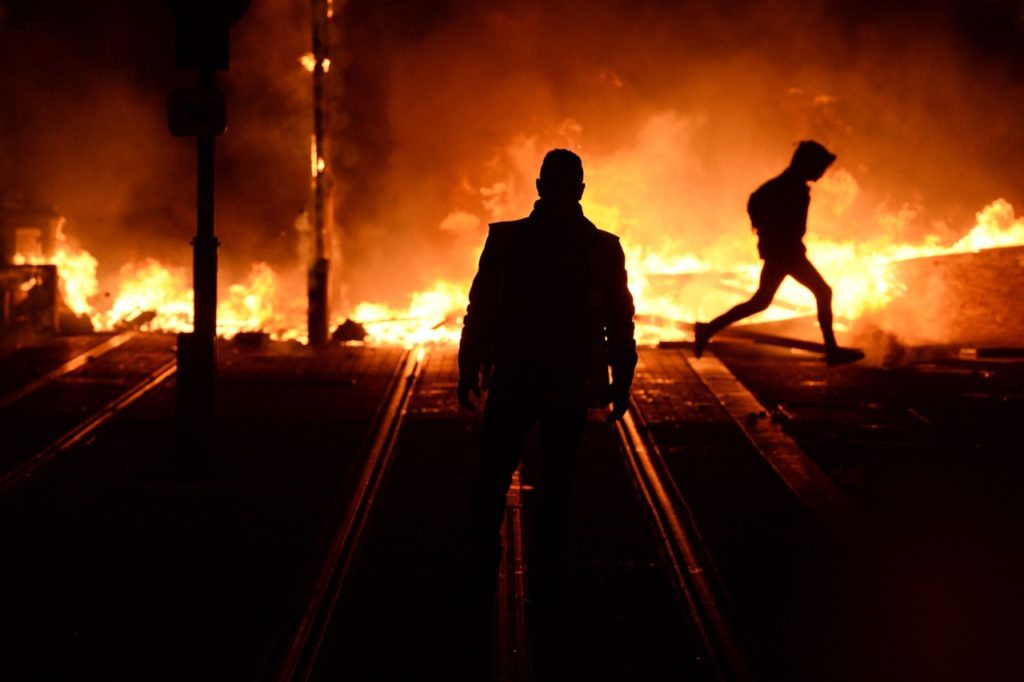 Protestors stand in front of a fire on December 8, 2018 in Bordeaux, southwestern France, on the sideline of a demonstration against rising costs of living. (Photo: NICOLAS TUCAT/AFP/Getty Images) 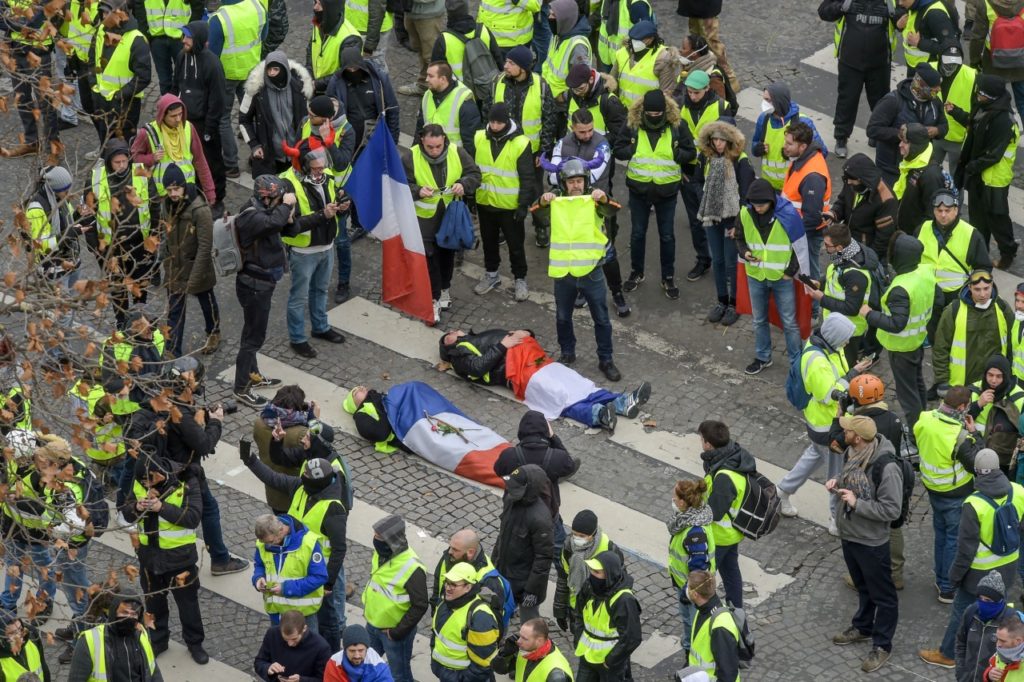 Protestors wrapped in French flags lie on the ground near riot police on the Champs Elysees avenue in Paris. (Photo: LUCAS BARIOULET/AFP/Getty Images) 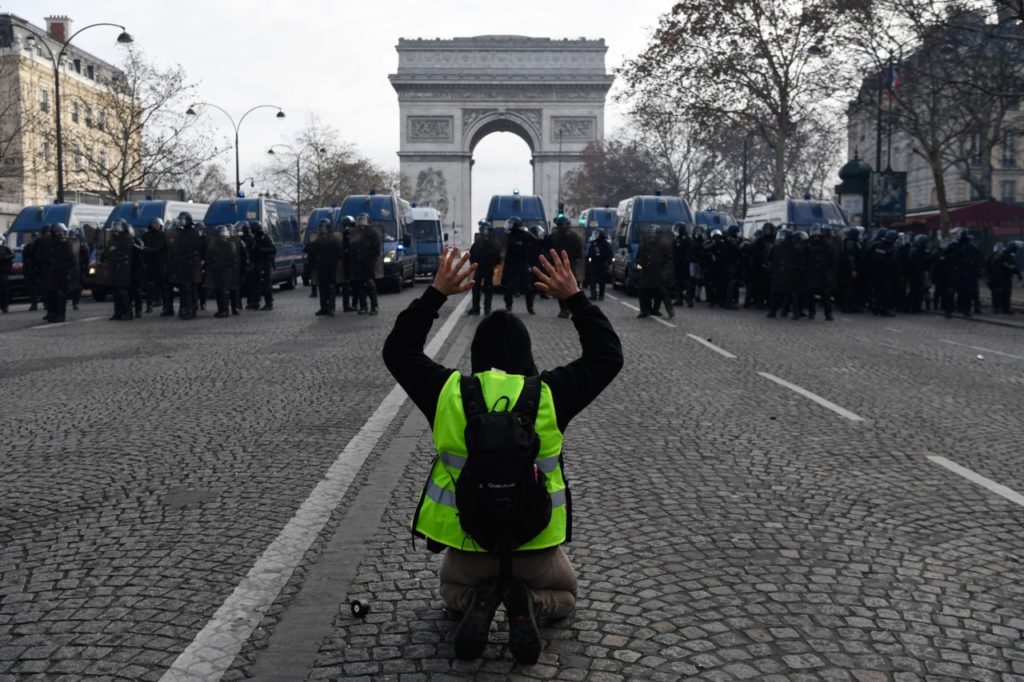 A protester wearing a “yellow vest” (gilets jaunes) kneels in front of the police forces on the Champs Elysees avenue in Paris (Photo: BERTRAND GUAY/AFP/Getty Images)