Following the brutal attack on populist Alternative for Germany (AfD) MP Frank Magnitz, a far-left extremist Antifa group have allegedly taken credit for the attack in a post on a well-known far-left website.

The post, which was made on the Indymedia platform, credits the brutal attack on Magnitz to the Antifa group “Antifaschistischer Frühling Bremen” who made the post at 6 p.m. local German time on Wednesday.

Only an archive of the post remains online as the link to the original, which still displays on a Google search, says the post has either been deleted or is inaccessible, with the message “you do not have permission to access this page” displayed.

In the post, the group takes credit for the attack on the populist MP who serves as AfD chairman in Bremen, saying: “The anti-fascist spring Bremen announces that we wanted to free the AfD politician F. Magnitz of his fascist ideas on Monday at 18.00 clock local time.”

The group claimed that Magnitz had contacts in the “far-right scene and needed to be “muzzled” along with any other “Nazis.”

“We do not tolerate any Nazi scum in our area! The anti-fascist spring will come! Get ready!” the alt-left group added.

According to German newspaper Die Welt, Bremen police are investigating the post and still consider the attack to be possibly politically motivated, despite not having made any arrests in the case so far.

On the Antifa Bremen Facebook page, only days before the attack, the group appeared to pos a picture advocating violence toward “Nazis” with the caption “no platform, no mercy, no safe space for Nazis.” 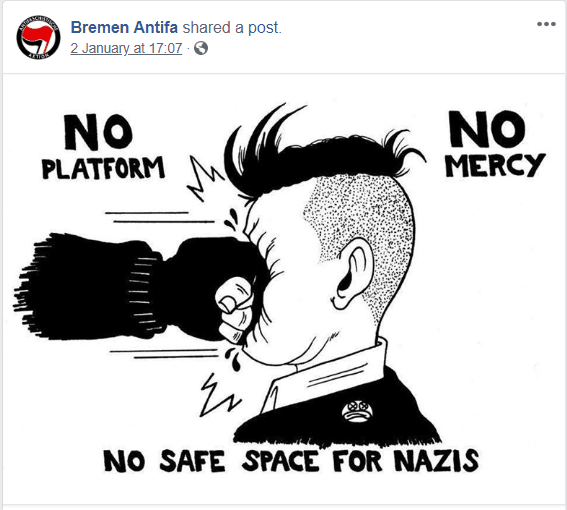 The Indymedia platform, on which the post was made, has been linked to far left extremism and the Antifa movement in Germany previously.

The largest far-left Antifa site on Indymedia, Linksunten, was shut down by the German government last year following the massive levels of violence at the Hamburg G20 summit that saw hundreds of police injured, as well as cars and shops destroyed.

The attack on Magnitz also came mere days after an office of the AfD was bombed in the city of Döbeln, with investigators believing that this attack was also politically motivated.