Three Romanian migrants have been imprisoned for beating a man to death with shears and pick-axe handles in the street in Ilford, London.

Fellow Romanian Sandel Serbu, 36, was ambushed by brothers Razvan Vladescu, 27, and Araman-Nardi Stoica, 25, and their relative Ionut Vasile, 28, according to an official statement from London’s Metropolitan Police Force.

The three men had tracked Serbu on a night out on November 12th 2017, apparently seeking revenge for an incident in which he had punched Vladescu at the Global night club on Ilford High Road.

“Compensation was demanded for Razvan Vladescu. Mr Serbu either refused to pay or failed to pay,” prosecutors told the court during the trial.

The end result was that Vladescu and his accomplices tracked the unwitting Serbu and set upon him as he was heading into a shop to buy cigarettes, “repeatedly hitting him full-force in the head with their weapons.”

The assault was so ferocious that one bypasser recalled hearing an audible “crack” as one of the blows landed, with a friend of Serbu’s who started forwarded to intervene being told by one of the attackers in no uncertain terms: “I will kill you if you move. Stay out of it.”

Serbu eventually managed to get away from the men, collapsing a short distance away from the scene of the initial attack. Instead of leaving it at that, however, the attackers approached their stricken victim and carried on with the assault. 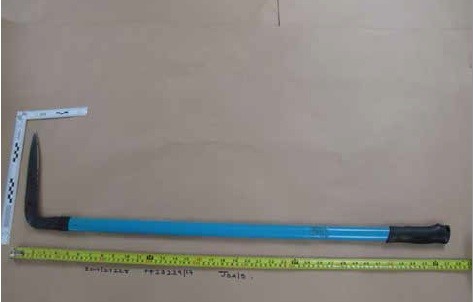 One of the weapons used in the deadly attack. (Metropolitan Police)

The attack only came to an end when an ambulance crew who happened to be passing the scene on their way to another emergency intervened, but “their sirens and blue lights did little, if anything, to deter the attackers” at first, according to the prosecution.

Eventually, they walked past the ambulance “like nothing happened” and drove away from the scene in a BMW 4×4 belonging to Vasile, leaving paramedics to try and save Serbu — ultimately without success.

“Sandel was popping into a shop when he was ambushed by a group of men armed with weapons who brutally beat him to death,” commented Detective Chief Inspector Paul Considine, who led the investigation into the slaying.

“Sandel was defenceless and had no way to protect himself. He managed to momentarily escape but soon fell to the ground and was once again savagely attacked. His attackers then left him dying in the street as they casually walked off.”

Vladescu was sentenced to “life” in prison for murder but will be eligible for parole after a minimum term of 26 years, plus 18 months for possession of an offensive weapon — although the second term is essentially meaningless, as it will run concurrently with the murder term.

Stoica was also sentenced to “life” for murder, with a slightly shorter minimum term of 23 years, plus a similarly bogus 18-month concurrent sentence for possession of an offensive weapon.

Vasile, finally, was convicted of manslaughter, for which he received relatively short 12-year term.

Criminals serving determinate sentences are typically eligible for automatic release on licence at the halfway point — or more rarely the two-thirds point — in their terms.

Court reports do not say an exception has been made for Vasile, and the courts generally refuse to clarify such things, citing data protection regulations.