Guy Verhofstadt, the European Parliament’s abrasive representative in the Brexit negotiations, has denied he is interfering in Britain’s elections by campaigning with the Liberal Democrats, who want to overturn the EU referendum result.

Verhofstadt argued he was campaigning in his capacity as the “leader of the liberals and democrats for Europe” — the former Belgian prime minister leads the Alliance of Liberals and Democrats for Europe group (ALDE) euro-group in the European Parliament, which includes the Liberal Democrats — so his actions did not amount to foreign interference in Britain’s affairs.

“This is Europe. Europe. It’s all Europe,” he insisted.

The Liberal Democrats launched their 2019 EU Elections campaign yesterday, fronted by the confrontational but self-explanatory campaign slogan “Bollocks to Brexit“.

The intervention of Verhofstadt, a Belgian politician, in the campaign of a British political party comes just days after top eurocrat Jean-Claude Juncker expressed his regret at the European Union not having interfered more in the Brexit referendum in 2016.

“I was wrong to be silent at an important moment”, the EU president said, claiming that if it had intervened, the EU could have destroyed “lies” being perpetrated during the campaign.

Verhofstadt, who suggested Brexiteers could “end up on the guillotine” in February, is more up-front than most europhiles about wanting the European Union to seize more powers from the national governments of its member states to establish a federal United States of Europe.

Verhofstadt and his team have also been up-front about the purpose of the so-called Brexit deal the EU put together with Remain-voting British prime minister Theresa May, making a number of revealing comments in a recent documentary showcased by the BBC.

“We finally turned them into a colony,” one of his staffers appears to gloat at one point, seemingly in reference to the terms of Mrs May’s deal.

“And that was our plan from the first moment,” he added, while another staffer laughed.

“Olly Robbins came to me and said ‘Guy, can I become a Belgium citizen after this whole thing because I don’t think I will return’,” laughs Verhofstadt himself at another point, in reference to the Civil Service bureaucrat who Mrs May has relied on to handle much of the negotiations, allegedly behind the backs of Brexit-supporting ministers at the Department for Exiting the European Union (DExEU).

Her Majesty’s Civil Service is a standing bureaucracy, supposed to serve the government of the day impartially — although every living former head of the Civil Service has publicly expressed their horror at the Brexit vote, and Robbins himself chaired a club passionately loyal to the European project at university.

Nigel Farage clashed with the EU's Brexit negotiator, Guy Verhofstadt, calling him a fanatic and a nationalist! pic.twitter.com/vNM5aolIUS

Verhofstadt beat the streets with the Liberal Democrats in leafy Camden — raising eyebrows among even left-liberal journalists who might be inclined to support their “Bollocks to Brexit” platform.

“There is a divide created, intentionally or not, between the metropolitan elites and those who voted to leave the European Union who live outside in rural England and small towns across the country who don’t see Brexit happening or working for them. Doesn’t this photocall feed into that?” he asked. 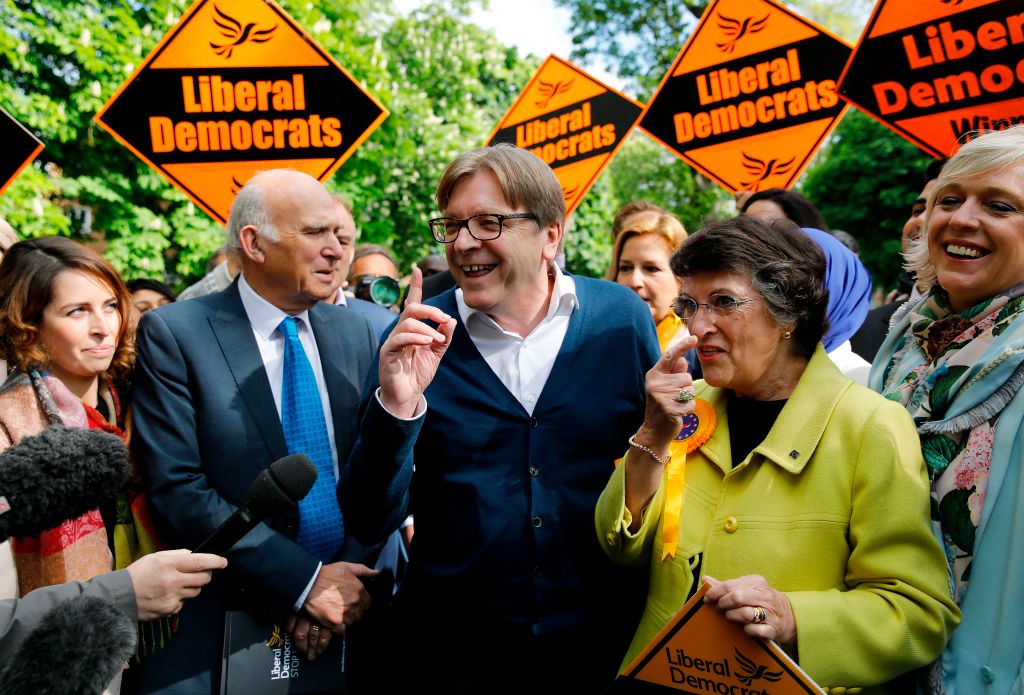 Britain’s leader of the Liberal Democrat party, Vince Cable (2L) and the European Parliament’s chief Brexit negotiator and Leader of the Alliance of Liberals and Democrats for Europe party, Guy Verhofstadt (C) speak to members of the media before canvassing for support for their candidates in the forthcoming European elections, in London on May 10, 2019. TOLGA AKMEN/AFP/Getty Images

“We just happen to be here, we could have found a council estate,” Sir Vince retorted.

“But you didn’t,” Usherwood observed.

“We didn’t, no,” conceded the 76-year-old, who has previously bragged about buying a London house for £13,500 which is now “worth approaching a million if not more” himself.

Interestingly, before Sir Vince returned to frontline politics as Lib Dem leader and began campaigning on a platform of overturning Brexit, he conceded that EU Free Movement harmed the earnings of the British working class and argued that the “Remain Resistance” should stop supporting it.