DUP leader Arlene Foster has accused the European Union of using the stalemate over renegotiating the UK’s withdrawal treaty to “break up the United Kingdom”.

The leader of the Democratic Unionist Party, a conservative, Northern Irish party which holds up Boris Johnson’s minority government in a confidence and supply agreement, had talked to the prime minister about getting a deal with the EU that removed the Irish backstop.

On Brussels’ intransigence, Mrs Foster said: “…we have a very belligerent European Union who instead of focusing on a deal good for all of us, wanted to break up the United Kingdom — something, of course, which no British prime minister should be a part of”.

The DUP leader and others in her party have made similar comments in the past, accusing the EU of using Brexit and the Irish backstop — a piece of the withdrawal treaty that could threaten the integrity of the union by creating a customs border between the isle of Ireland and Great Britain — as a first step to forcing a unification of the country of Northern Ireland with the EU member-state Republic of Ireland.

Mrs Foster also hit out at the prime minister of the Republic of Ireland, Leo Varadkar, of “Project Fear mark 2” after the Irish Central Bank claimed that a clean, no-deal Brexit would cost their country 34,000 jobs and destabilise the economy.

On why she still backs the possibility of a no-deal Brexit, the DUP leader said in comments reported by The Telegraph: “I sometimes wonder have people ever been in negotiations when they take things off the table before they get to the end of a negotiation.

“Of course you keep it on the table. We are in a negotiation to get the best deal for the people of the United Kingdom, you don’t take things off the table and we have learned that over quite some time.” 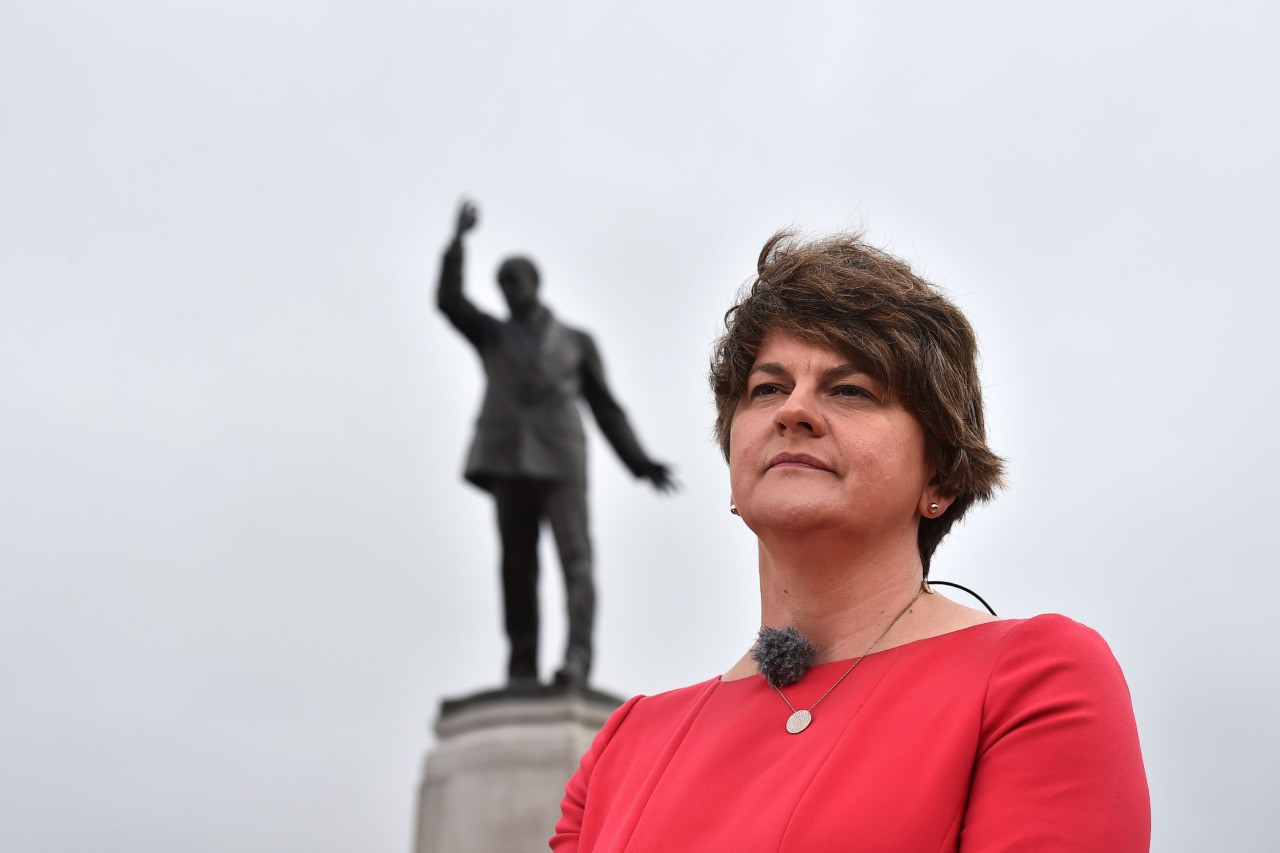 BELFAST, NORTHERN IRELAND – JULY 31: DUP leader Arlene Foster conducts a television interview prior to the arrival of Prime Minister Boris Johnson at Stormont on July 31, 2019 in Belfast, Northern Ireland. The Prime Minister is on his first official visit to Northern Ireland to discuss Brexit, and the restoration of the Northern Ireland Assembly, with the main political parties. (Photo by Charles McQuillan/Getty Images)

On Wednesday, Prime Minister Johnson met with the five major parties at Stormont, the seat of Northern Ireland’s assembly, including the leftist, pro-EU, Irish republican party Sinn Féin — long-regarded as the political wing of the Provisional IRA — that campaigns for Northern Ireland to leave the United Kingdom and join the Republic of Ireland. The talks were intended to focus on resolving power-sharing in the country after the devolved government collapsed in January 2017.

Downing Street confirmed after the meeting that during all one-to-one meetings with the five party leaders, the prime minister “made clear that the UK would be leaving the EU on 31 October come what may, and restated his intention to do so with a deal”.

The statement added that in a no-deal, in line with the Belfast agreement, “in no circumstances would there be physical checks or infrastructure on the border”, while Mr Johnson “made clear… his determination to strengthen the union and Northern Ireland’s place within it”.

Sinn Féin leader Mary Lou McDonald said she discussed with the prime minister the possibility of a ‘border poll’ — a referendum in Northern Ireland on leaving the UK to form a ‘united Ireland’ — in the event of a no-deal Brexit, saying any planning in respect to no-deal “has to include the constitutional question and the issue of a border poll here in Ireland”.

“We have stated to him very clearly that Brexit in any event, but certainly a disorderly Brexit, represents in anybody’s language a dramatic change of circumstances on this island and it would be unthinkable in those circumstances that people would not be given the opportunity to decide on our future together,” Ms McDonald added.

When unionist Mrs Foster asked the Prime Minister Johnson the same question, on the border poll, she said told media he had stressed he would “never be neutral on the Union and talk of a border poll was not something he was entertaining”. 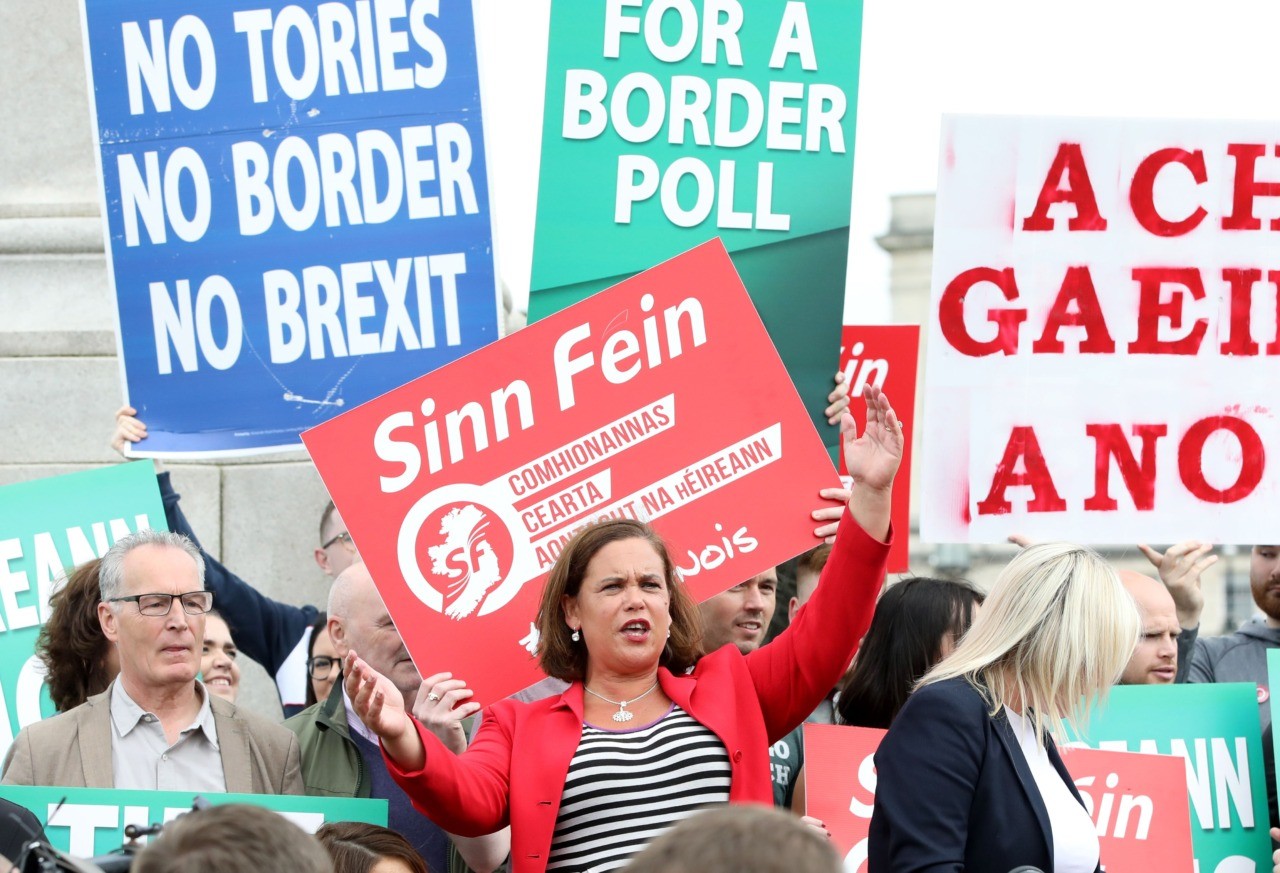