Santiago Abascal, the leader of the populist Spanish party VOX, has vowed to ban separatist parties in Catalonia while praising the Spanish monarchy.

Mr Abascal spoke to Breitbart London saying that the three main branches of the Spanish government had failed to combat the rise of Catalonian separatism. He said that no party except VOX had truly fought against the separatist movement.

“Spain is at a critical moment when the three powers have failed: the executive because it came to the allied power with the same ones who want to annihilate Spain; the legislature because with its inaction has allowed the separatists to reach this point; and the judiciary for having made a ruling tailored to the ruling party and its separatist partners,” he said.

While being critical of the three branches of government, Abascal praised the Spanish Crown, currently headed by King Felipe VI, saying: “The only institution that has lived through Spain’s historic moments, as well as the only one that has fulfilled its obligations to the Spanish people, has been the Crown.” 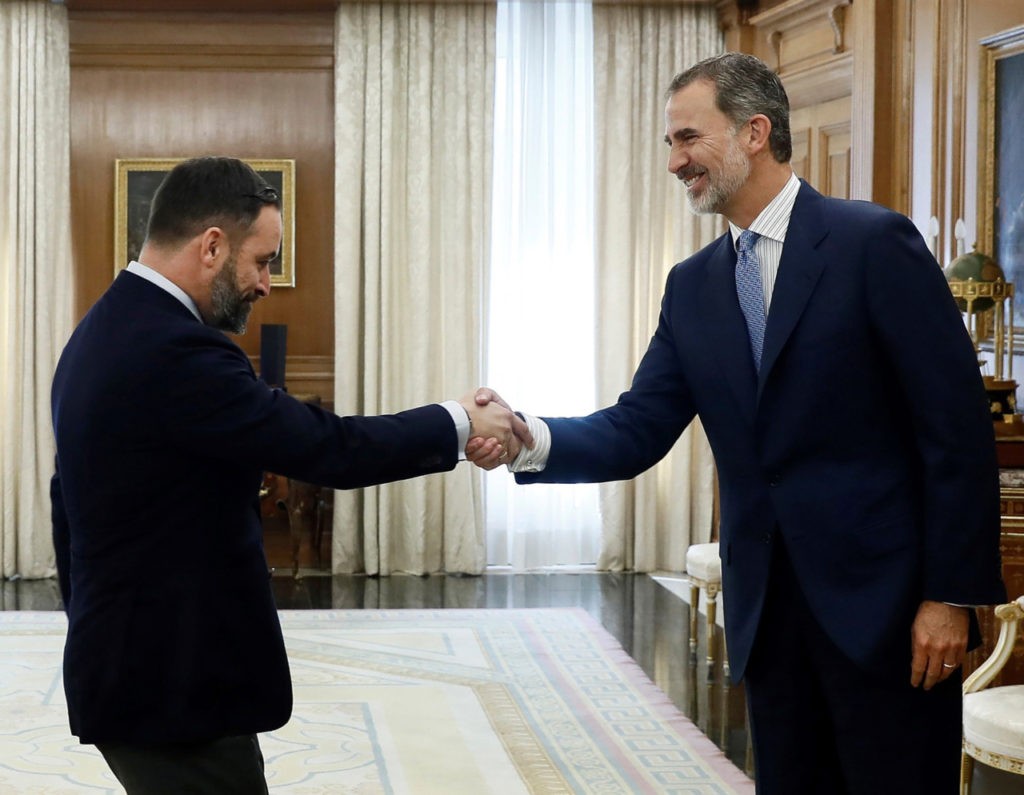 King Felipe VI of Spain (R) shakes hands with Spanish party Vox leader Santiago Abascal on September 17, 2019, at the Zarzuela Palace in Madrid, before a meeting in an eleventh-hour bid to form a government and to break the political impasse. (Photo: Sebastian MARISCAL / POOL / AFP)

Abascal went on to add that VOX would seek to implement a state of emergency under article 116 of the Spanish constitution to “restore order and constitutional legality in Catalonia”.

“Once the constitutional order has been restored, we will proceed to call for the illegalisation of the separatist parties,” he said.

“The Tsunami Democràtic is a new tool created by separatism to destabilise Spain through violent actions aimed at breaking our homeland and subduing the people of Catalonia,” he said.

“The Catalan oligarchs [are] encouraging violent groups to sow chaos with a general blessing,” he added.

The group has been likened to the Hong Kong demonstrators by some due to their decentralised nature.

VOX has seen a surge of growth in the last year, winning 11 per cent of the vote in last year’s regional election in Andalusia. In April, the party entered the Spanish national parliament for the first time.

Due to a lack of a coalition deal, Spain faces yet another national election in November. A recent poll shows VOX on around 10 per cent.