“A lot” of the estimated €100 million worth of cocaine discovered aboard a drug-running submarine discovered off the coast of Spain was headed to the United Kingdom, a police spokesman has said.

The low-profile ship, not a true submarine but a semi-submersible designed to cross oceans without being spotted was intercepted off the north-western Spanish coast at the weekend following a joint policing operation Britain’s Guardian newspaper reports involved Britain’s FBI equivalent the National Crime Agency (NCA), and officers from the United States, Portugal, and Brazil.

The three tons of cocaine was loaded into the ship in 152 bales and has an estimated street value of €100 million. Having made the approximately 4,200-mile journey across the Atlantic ocean from Colombia in rough seas, conditions were then too bad for the submarine to meet a second vessel to offload its cargo without coming too close to shore. 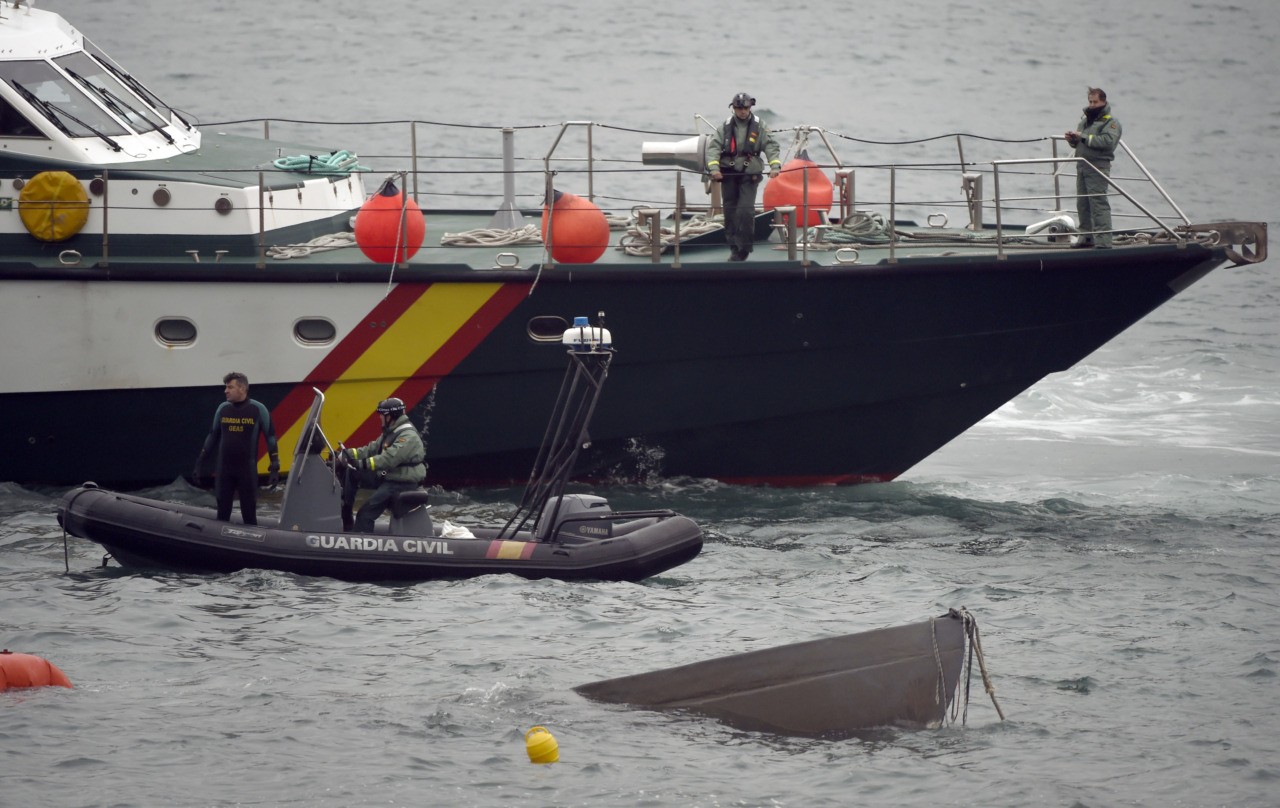 The prow of a submarine used to transport drugs illegally emerges as Spanish Guardia Civil’s divers work to refloat it in Aldan, northwestern Spain, on November 25, 2019. / MIGUEL RIOPA/AFP via Getty Images

Having been discovered by police, the crew scuttled the ship and attempted to flee. Two Ecuadorian nationals were arrested and a third is on the run.

The ship was refloated three days later by Spanish divers and towed ashore, where it was subsequently lifted from the water. Despite so-called ‘Narco Submarines’ being a relatively well-known part of smuggling operations in the United States and surrounding waters, this is the first time a drug submarine is known to have attempted to cross the Atlantic.

Its three-ton cargo is also comparatively small compared to some. Breitbart has reported in the past on narco subs caught near the U.S. carrying up to eight tons of cocaine.

AFP reports the remarks of cartel expert Robert J Bunker of the US Army War College in Pennsylvania, who said the semi-submersibles are usually built in remote river inlets in the jungles of Colombia, Ecuador and Guyana for around a million dollars “but can run into a few million dollars for larger or more sophisticated vessels”.

“If this submarine did have its origins in say Colombia or Guyana it would be considered a ‘holy grail’ voyage,” he said.

“It would represent the first such direct narco submarine voyage to Europe from South America ever identified”. Bunker estimates that drug cartels have to date built around 1,000 so-called narco submarines. 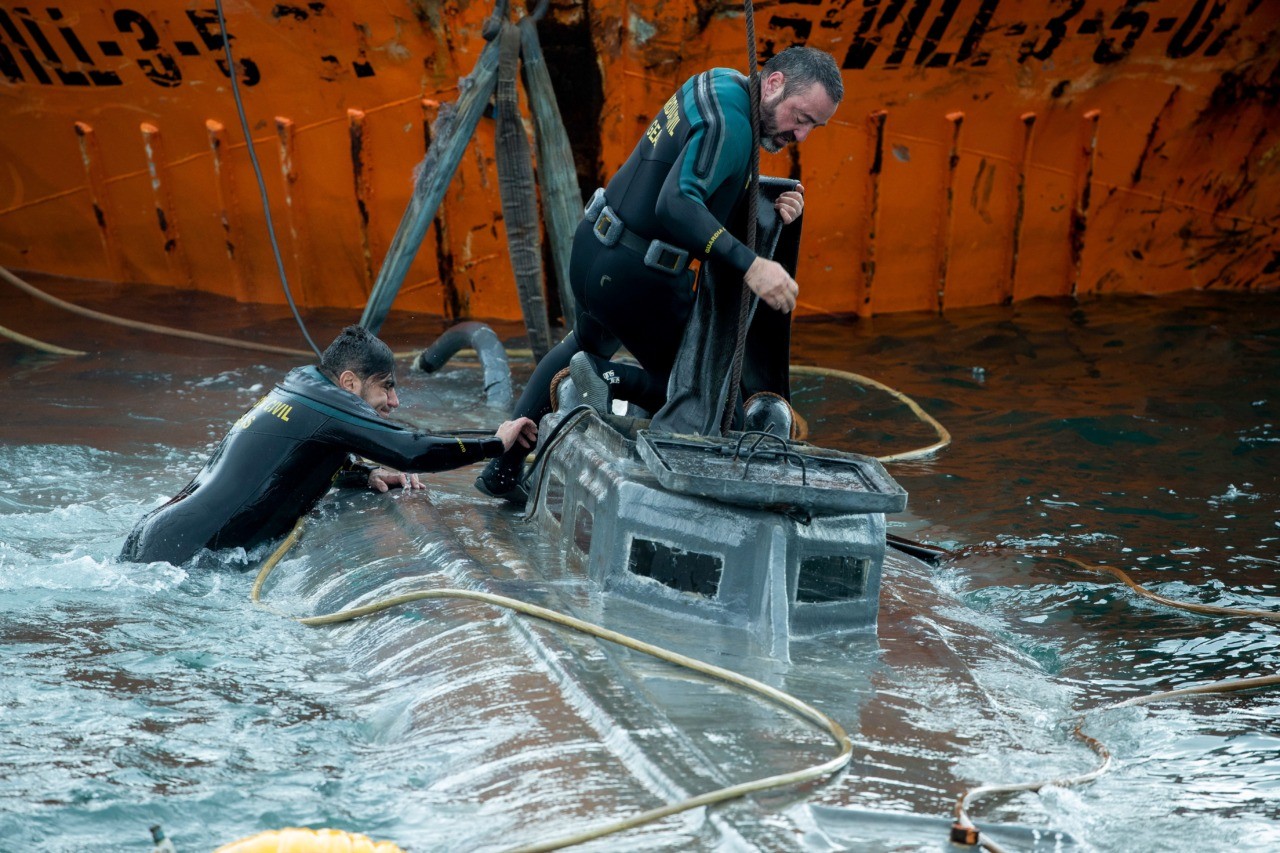 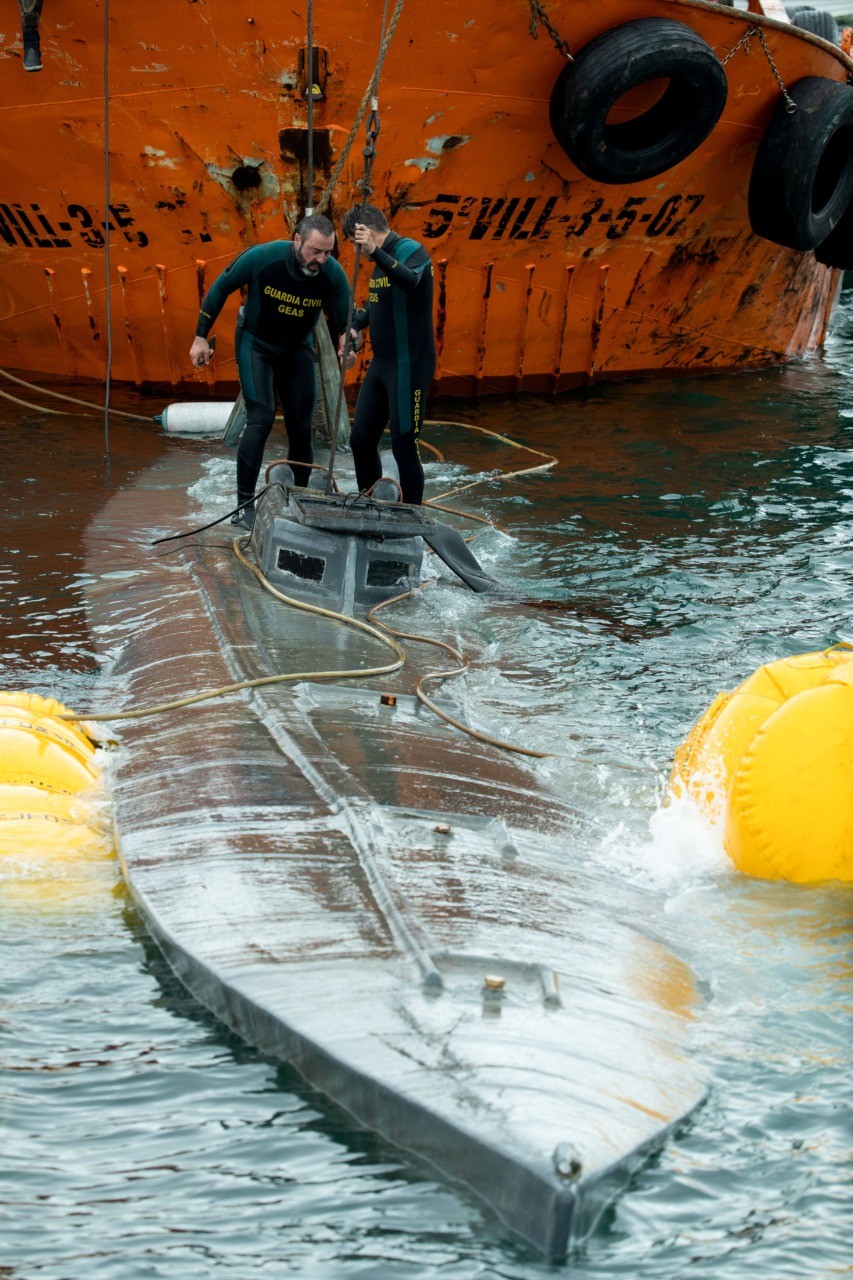 British newspaper The Guardian cites the comments of NCA deputy director Tom Dowdall who said of the submarine: “It is highly likely a lot of this cocaine would have ended up on the streets of the UK, fuelling serious violence and impacting on the most vulnerable members of society… Seizures like this are vital in disrupting and dismantling transnational crime groups trafficking deadly drugs, and ultimately protecting the public from the damage they cause.”

Despite the spectacular nature of the raid, MAOC statistics show the vast majority of cocaine seized by European Union police forces at sea comes from sailing vessels, followed by powered commercial fishing and merchant vessels. 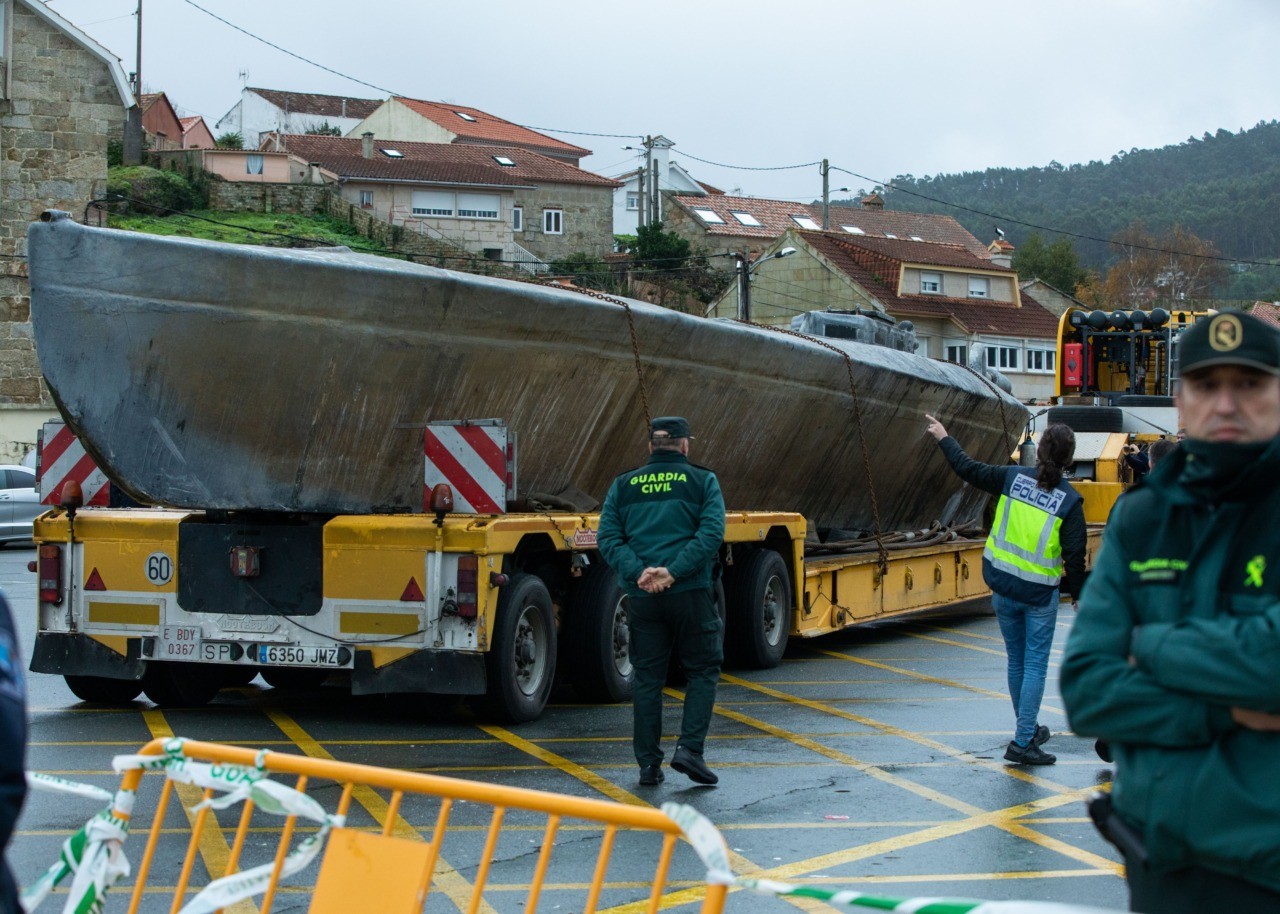 Spanish Guardia Civil’s guard stand near a submarine used to transport drugs illegally in Aldan, northwestern Spain, on November 27, 2019. – Police in Spain have seized a submarine, about 20 metres (65 feet) long, loaded with several tonnes of cocaine off the coast of the northwestern region of Galicia which arrived from South America, officials said today. Two Ecuadorian men were arrested as part of the operation yesterday in the seaside town of Cangas near the border with Portugal. (Photo by Lalo R. VILLAR / AFP) (Photo by LALO R. VILLAR/AFP via Getty Images) 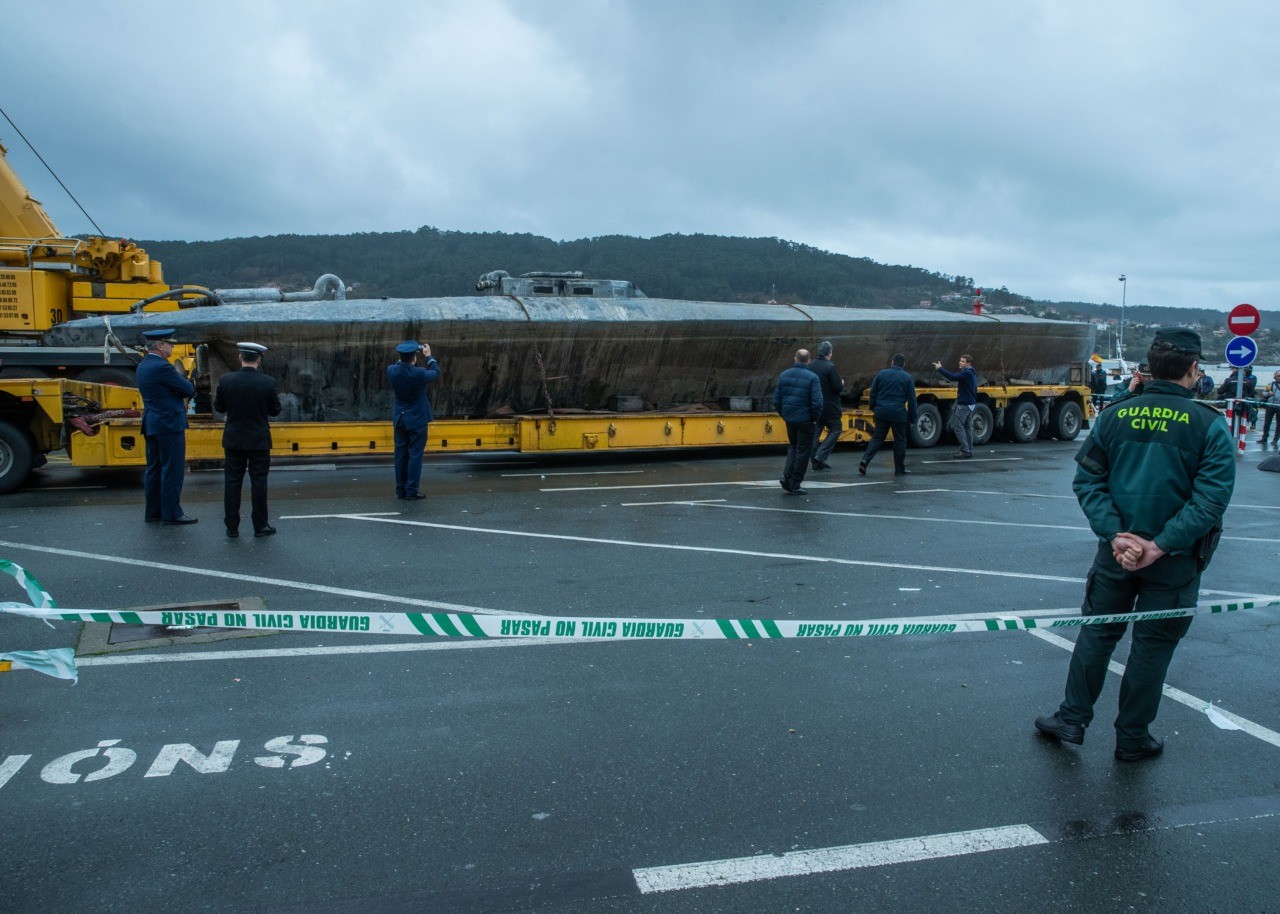