Antifa’s newly created Capitol Hill Autonomous Zone in Seattle is straight from the playbook of their European counterparts who have established anti-police no-go squatter areas in European cities for decades.

The tactic of declaring an area “autonomous” and outside of police and government authority is relatively new to the United States hard-left, but has a deep history among Antifa extremists in Europe and has led to pitched battles and scenes of massive violence when police have tried to enforce government authority in Antifa strongholds.

While the original Antifa movement was a paramilitary wing of the German Communist Party in the 1930s, the current Antifa began in the “autonomous scene” of West Germany in the 1980s and went hand in hand with anarchists occupying various buildings, many of which remain occupied, with national laws unenforced, to this day.

TOMLINSON: Europe’s Antifa History Should Serve as a Warning to America https://t.co/xEuGfU7gUq

The far-left Jacobin Magazine described West German Antifa as an “autonomist movement still numbering in the tens of thousands of active members and capable of occupying entire city blocks in some West German metropoles”.

“Some argue that with the arrival of European-style neo-fascist movements on American shores, it is also time to import European Antifa tactics in response,” the magazine goes on to add.

There are several Antifa no-go zones in Germany, but the most well-known are the “Rote Flora” in Hamburg, a former theatre occupied by Antifa since 1989, and the “Riga 94”, an apartment complex in Berlin’s Friedrichshain district that has been occupied since 1990. 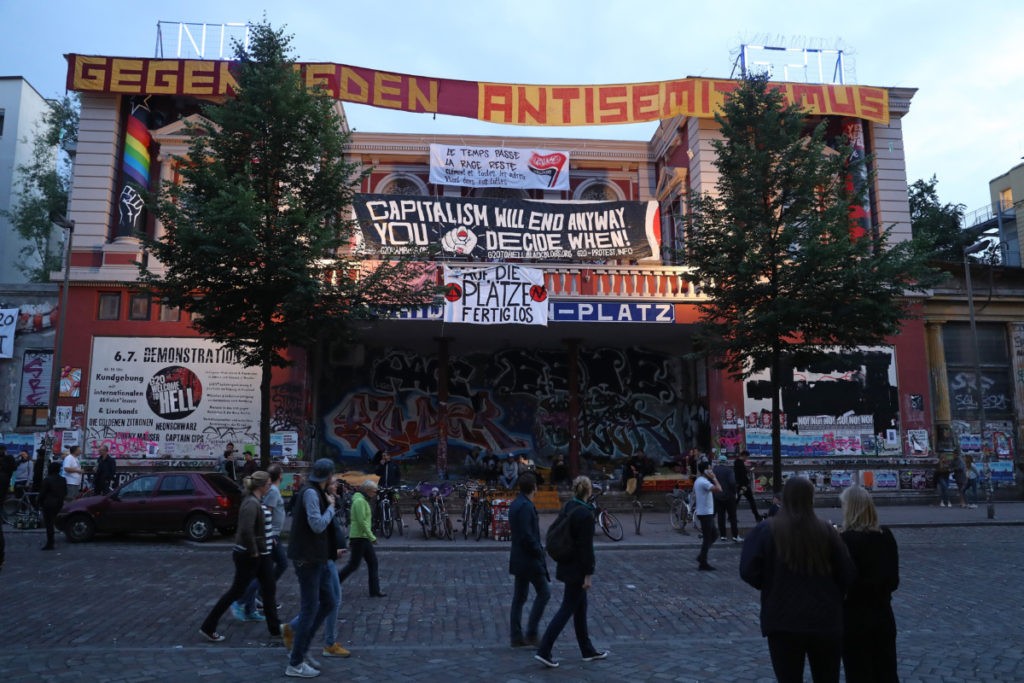 People walk past the Rote Flora, a cultural and political venue that has become a symbol of the radical left, ahead of Friday and Saturday’s G20 summit on July 5, 2017, in Hamburg, Germany. (Photo: Sean Gallup/Getty Images)

Rote Flora, the longest still-occupied Antifa autonomous zone, acts a base of operations for Antifa. It came to prominence particularly during the 2017 Hamburg G20 riots which saw extremists wage war against German police and injured hundreds of officers, loot and smash local shops, and set residents’ cars on fire.

It also acts as a community hub for far-left extremism where meetings and lectures on various topics are held.

Earlier this month, it was revealed that a Hamburg constitutional court judge had given lectures at the Rote Flora after being invited by the Rote Hilfe (Red Aid) organisation.

Rote Hilfe provides help to imprisoned far-left extremists, including members of the notorious Red Army Faction (RAF) terrorist group, also known as the Baader-Meinhof gang, which carried out dozens of killings from the 1970s to the late 1990s.

While attempts have been made to sell the Rote Flora theatre and have the Antifa extremists evicted, particularly after the violence of the G20, once Antifa have fortified themselves in areas, they have become very hard to remove. 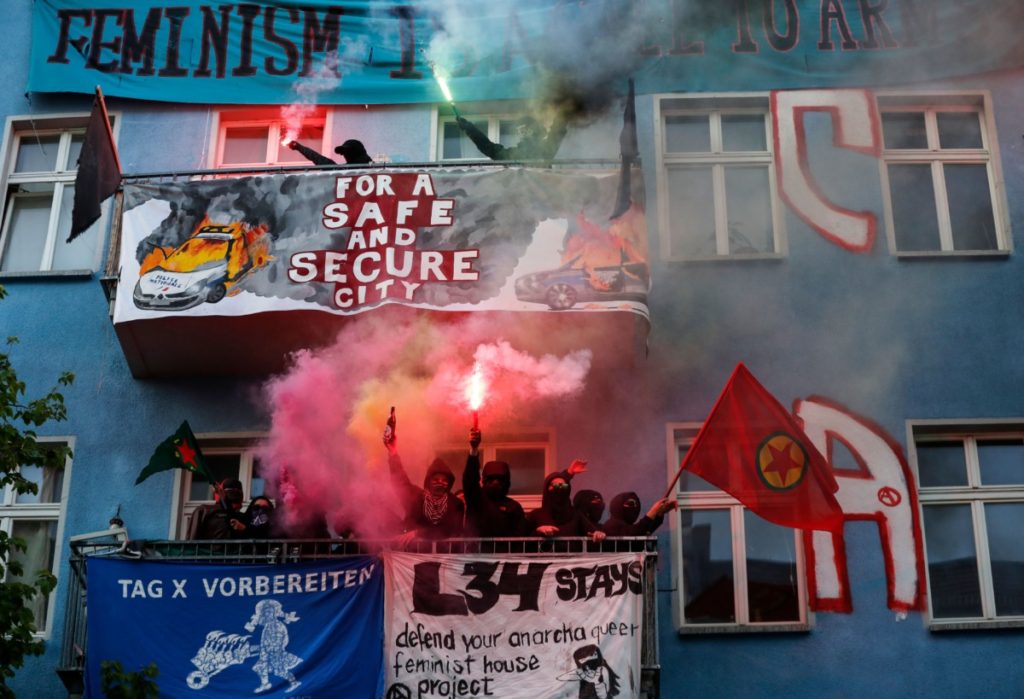 Supporters of the “Revolutionary 1st of May Demonstration” light flares from a former occupied house in the Rigaer street in Berlin, on May 1, 2019. The flag in the lower right belongs to the Kurdistan Worker’s Party (PKK) terrorist group.  (Photo: ODD ANDERSEN/AFP via Getty Images)

Similar attempts have been made in Berlin to remove Antifa from Riga 94, located on Rigaer Strasse. Police have often faced ultra-violence from Antifa during attempts at either making arrests or evicting members of the group. Riots have often accompanied eviction attempts as well.

Many Antifa extremists were initially evicted from the building and took to the streets for several nights afterwards to riot. Antifa extremists attacked police, banks, smashed many storefronts, and set cars on fire across Berlin in response.

Antifa extremists remain illegally occupying Riga 94 despite the numerous attempts by law enforcement to remove them, with the area being used as a base last November to attack police, which left 19 officers injured.

Sabotage and the setting of potentially fatal booby traps have also been used as a tactic by Antifa to prevent evictions.

In 2017, Antifa members in the far-left extremist shop squat Friedel 54 connected the door handles of the building directly to the electricity mains in order to electrocute officers serving the warrant. The tactic failed as police turned off electricity to the block prior to entering.

Germany is, of course, not the only country where Antifa have illegally occupied buildings to create autonomous communes and safe spaces for extremist activities.

In France, an alleged headquarters was discovered by police in the Paris suburb of Bagnolet where Antifa members were actively manufacturing bombs, and several were caught with Molotov cocktails. The group was illegally occupying the building, which sported graffiti stating “Welcome to our Paris HQ Antifa75”.

The most well-known Antifa anarchist autonomous area in France is the ZAD, which stands for Zone to Defend.

The ZAD is an abandoned airport site in Notre-Dame-Des-Landes that has been occupied by extremists, who label themselves “Zadistes” since 2008 and turned into an “autonomous utopia”.

In 2018, a police operation involving 2,000 officers clashed with the 100 or so residents of the ZAD for several days. Following the evictions, members of Antifa fighting alongside Kurdish forces in Northern Syria threatened to wage war against the French government in response to the police actions.

Antifa has close connections with the Kurdistan Workers’ Party (PKK) terror group in several countries, including Germany and the UK.

In Italy, which has a largely anarchist movement responsible for bombings and other violence, Antifa anarchists turned the former Olympic Village in Turin into a no-go autonomous area with the help of illegal immigrants.

The area, which was built for the 2006 Winter Olympics, was occupied for several years by Antifa in Italy and became one of their many so-called “social centres”. A 2018 report revealed that 95 per cent of the residents of the area at the time were migrant men from countries like Nigeria, Mali, and The Gambia.

As in Germany, Antifa extremists have violently clashed with police when any attempt has been made to evacuate the squatters in the area.

Should the United States allow such autonomous zones to be created in its major cities as Germany and other countries have, America can likely expect further violence towards police in such areas, along with the formation of safe havens for Antifa extremists and their allies to engage in their stated goals of overthrowing the state and the capitalist system itself. Be warned.