The Conservative government of Boris Johnson has rejected a petition to protect Britain’s statues and monuments, saying they are “satisfied” with the supposed protections already in place.

The ‘Protect all monuments and statues from being taken down’ petition, which had over 30,000 signatures and counting as of the time of publication, said we “We need laws to stop historical monuments and statues from being removed,” and urged politicians to do so by extending the “laws protecting listed buildings and structures, to protect our history.”

Monuments and other memorials to historic figures have come under pressure since protests over the death of George Floyd in the United States morphed into a campaign against the West, Western institutions, and Western history more generally.

In Britain, police allowed demonstrators to rip down a historic statue in the city of Bristol, and have taken little action to punish people for vandalising other monuments across London and the wider country.

Moreover, Church of England clergy, London mayor Sadiq Khan, and left-liberal local government leaders across the country have launched over a hundred commissions and reviews to audit and in some cases replace all kinds of historic structures and memorials, with some statues and stained glass windows already removed.

Prime Minister Boris Johnson has claimed he is opposed to people “try[ing] to edit or censor our past” — but, given his government’s reply to the statues petition, he apparently does not feel the need to actually do something to stop it.

“Events have demonstrated how the statues and memorials that adorn public spaces elicit strong feelings,” read the government’s official response to the petition.

“We are satisfied that the system in place recognises those that merit statutory protection,” it added.

The full version of the response spent much time meandering through the existing listing system and associated legislation for buildings, monuments, plaques, and so — but ultimately conceded “that listing does not prevent a statue or memorial from being removed if the relevant planning authority decides to grant listed building consent (LBC) for this”.

“The Government does not propose to remove contested statues or memorials located on its property,” the reply added, saying that “It believes that it is always legitimate to examine and debate Britain’s history, but that removing statues or memorials is not the right approach.”

Of course, this does nothing to protect public statues which are not on central government property — and most are not.

The reply to the petition was signed simply “Department for Digital, Culture, Media and Sport”, possibly as no named individual wanted to be held responsible for it. 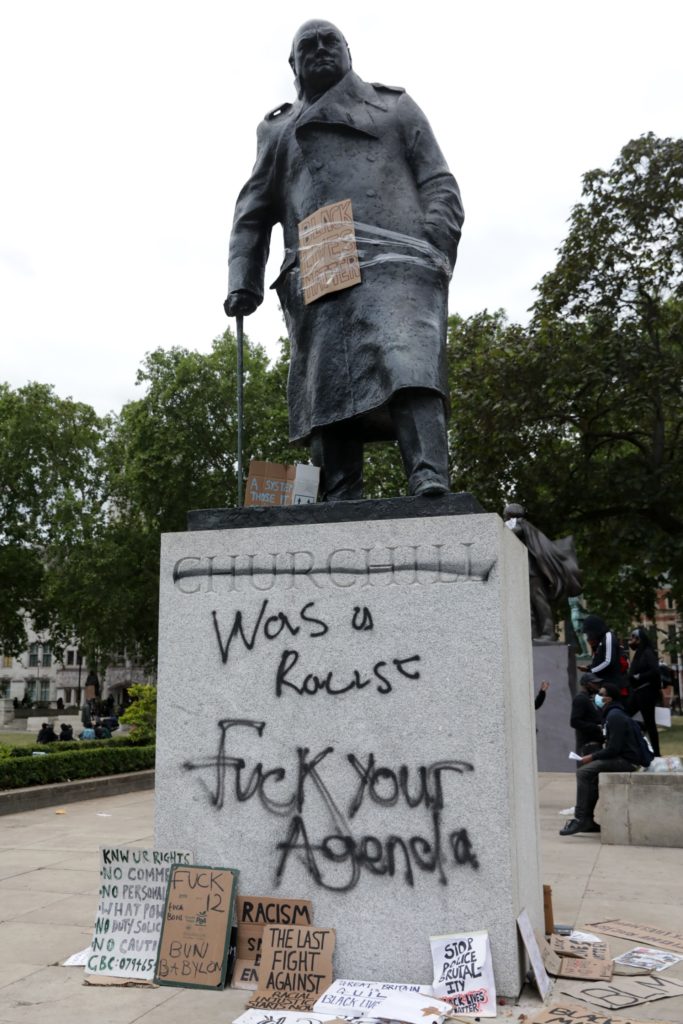 The statue of former British prime minister Winston Churchill is seen defaced, with the words (Churchill) “was a racist” written on its base in Parliament Square, central London after a demonstration outside the US Embassy, on June 7, 2020, organised to show solidarity with the Black Lives Matter movement in the wake of the killing of George Floyd, an unarmed black man who died after a police officer knelt on his neck in Minneapolis. – Taking a knee, banging drums and ignoring social distancing measures, outraged protesters from Sydney to London on Saturday kicked off a weekend of global rallies against racism and police brutality. (Photo by ISABEL INFANTES / AFP) (Photo by ISABEL INFANTES/AFP via Getty Images)