Shoppers caught at stores without a face covering now face a £100 fine in England and can be removed “with force” if they refuse, but major chains are refusing to enforce the rule to avoid confrontation, and major police federations have called the idea of officers forcing masks on people “absurd” and “unrealistic”.

Compulsory mask-wearing in many indoor public spaces took effect on Friday, weeks after the change was announced by the government and despite claims by senior government figures earlier on in the pandemic that mask-wearing was not effective and pointless for the general public. Those found shopping without a mask would face a £100 fine, and although they would not be arrested the BBC reports those who refuse to leave premises could be removed “with force” by police.

Yet how this rule will be enforced is unclear, given several UK chains have said they will not be forcing mask-wearing on their premises, and senior police officers have expressed dismay at the expectation that forces would be expected to do it.

Indeed, most of Britain’s largest supermarkets — Tesco, Sainsbury’s, Asda, Morrisons, Co-op, and Lidl — have all said they will not be enforcing mask-wearing, although all will encourage it passively through signage and in-store announcements. The only supermarkets in the top eight by UK market share to deviate from this position is German chain Aldi, which has said it will, in fact, ask customers to wear masks, and premium chain Waitrose which will have staff on the doors.

A large part of the decision to not intervene, by the stores’ own accounts, is a desire to avoid confrontation with their own customers. Left-wing UK newspaper The Guardian reports the remarks of a spokesman for Co-op supermarkets who said staff members already face abuse from customers on a daily basis, that this had worsened over the course of the coronavirus outbreak, and “enforcing the wearing of face masks could be another flashpoint.”

A spokesman for Lidl explained why it was not their responsibility to enforce the new rule, remarking: “Wearing a face covering is the responsibility of the individual and should only be enforced by Police and council enforcement officers.”

Yet despite that insistence, senior police officers — already stung by a raft of bad publicity and falling public sympathy following the at-times heavy-handed enforcement of early lockdown by some forces — appear reluctant to become the mask-police. As Breitbart London reported when the mask rule was first announced in mid-July, the Metropolitan Police Federation chief Ken Marsh expressed his concern, remarking on national radio of the new responsibility should not be put on the shoulders of his officers by the government.

Marsh said on July 15th: “…it will be night-on impossible for enforcement because you won’t have a police officer on every shop door because there isn’t enough of us… If a shopkeeper calls the police because someone hasn’t got a mask on, they haven’t got the power to detain them so that person can just walk away.

“We’ll be driving around and around London looking for people who aren’t wearing masks, it’s absolutely absurd.”

John Apter, the chairman of the Police Federation of England and Wales whose forces cover the whole geographical area impacted by the new government rule, was also very critical of the expectation that officers would be expected to confront the public over mask-wearing. He said: “To expect my colleagues to be policing the supermarket aisles, looking for those shoppers not wearing a face covering, is unrealistic and unfair.”

Apter made fresh comments this week as the ban came into force, stating the police simply did not have the resources to station officers at every supermarket and said they would only get involved “as a last resort”.

In Scotland, a historic nation part of the United Kingdom in north Britain, local powers devolved to the Edinburgh regional government means the masks in shops rule has already been in place, offering an insight into how enforcement may go. In two weeks of the rule, only one £100 fine has been issued.

There has been some resistance to the lockdown and masks in the United Kingdom. London has seen a number of anti-lockdown and anti-mask protests, which were initially broken up by police with ringleaders arrested, but more recently the demos have been left unmolested by officers.

In London, there was a stark one-man protest on the first day of the compulsory mask rule as a gentleman strode down Oxford Street — Britain’s busiest shopping street — completely naked except for a face-mask covering his genitals. 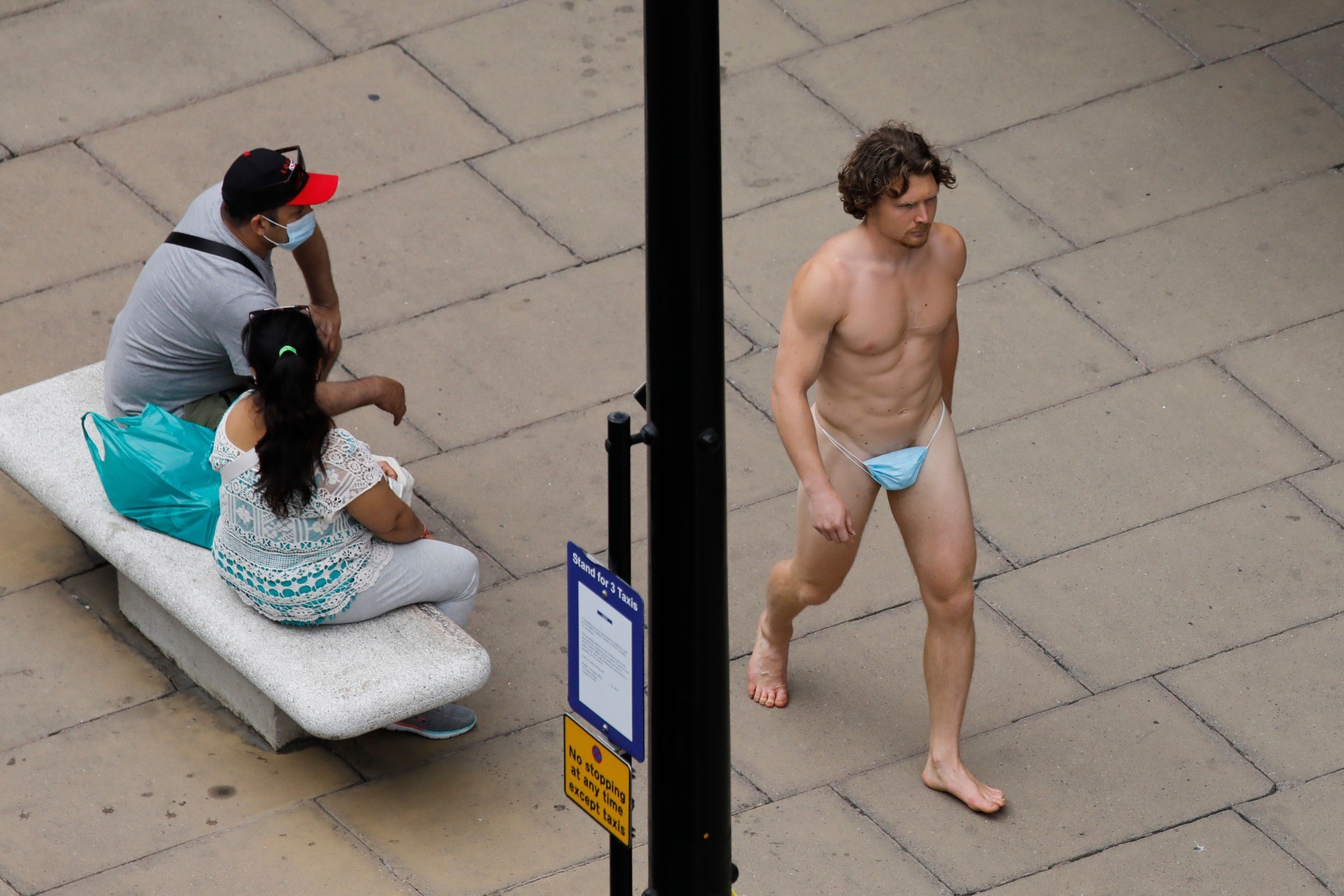 TOPSHOT – A man wearing a face mask to cover his genitals is seen walking along Oxford Street in London on July 24, 2020, after wearing facemasks in shops and supermarkets became compulsory in England as a measure to combat the spread of the novel coronavirus. (Photo by Tolga AKMEN / AFP) (Photo by TOLGA AKMEN/AFP via Getty Images)