A Romanian trucker was sentenced to 31 months in prison on Monday for attempting to smuggle a group of migrants out of the United Kingdom earlier this year.

The National Crime Agency (NCA) arrested Marius Halmaghe in Kent on October 1st, after he was found to be attempting to smuggle two Bangladeshis, one Egyptian, and one Indian out of the country.

His truck was stopped just outside the Port of Dover and was booked on a ferry to travel to Calais, France, later that day.

The 35-year-old trucker from Tulcea, Romania, pleaded guilty to attempting to facilitate illegal immigration and Canterbury Crown Court sentenced him to 31 months in prison on November 6th, the National Crime Agency said in a statement. 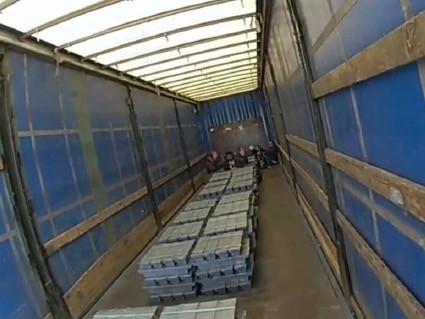 Four adult migrants, two Bangladeshis, one Indian and one Egyptian, were found in the rear of the trailer. National Crime Agency

The NCA branch operations manager Chris Hill said: “Halmaghe was involved in a dangerous criminal enterprise which not just broke immigration laws, it also put those migrants at serious risk.”

“It just goes to demonstrate how criminals involved in people smuggling do not care about the safety or wellbeing of those they transport, they just see them as a commodity,” Hill added.

“People smugglers are seeking to maximise their profits utilising both inbound and outbound lorry movements,” he warned.

In October, ITV reported that the lorry migrants were all suspected of being in the UK illegally and were handed over to immigration authorities. It has not been revealed whether the government has deported the migrants.

On the same day as Halmaghe’s sentencing, another Romanian trucker, Mihai Postolache, and his girlfriend, Roxana Stan, were also arrested in another alleged attempt to smuggle migrants out of the country, with five migrants discovered in the back of their trailer.

Farage: Britain Must Withdraw From The EU’s Asylum Rules to End the Channel Migrant Crisis https://t.co/MPG6YlThez

While the National Crime Agency did not reveal the motive for the migrants to attempt to clandestinely leave the UK, however, it may be the case that they were trying to re-enter the country to launch a fresh appeal for asylum.

A 2015 investigation by the BBC found that people smugglers traffic illegal aliens from Dover to France so that they can avoid deportation and then return to the country at a later date.

In September, the Home Office revealed that some 50 so-called “boomerang” migrants were granted asylum in the UK after previously being deported as their refugee status claims were initially deemed to be fraudulent.

Conservative MP Peter Bone said: “The migrants seem to be gaming the system to eventually get the result they want.”

“Ministers should consider new rules which forbid those who have made a failed attempt from coming back,” Bone suggested.

The perils of the lorry migrant smuggling trade was tragically demonstrated last October when 39 Vietnamese migrants suffocated to death in the back of a refrigerated truck near the southeast port of Purfleet.