The Dutch government denied it was planning to deploy the army to quell anti-corona-lockdown riots on Tuesday as the country experienced its third day of unrest in response to a curfew order.

Unrest has spread out of the major Dutch cities to dozens of smaller towns across the Netherlands in the past three days. Protests against a nationwide coronavirus curfew developed into full-blown riots, resulting in violent attacks against police and other emergency workers and looting of shops. Police arrested over 180 people on Monday night, following another 240 arrested on Sunday night. 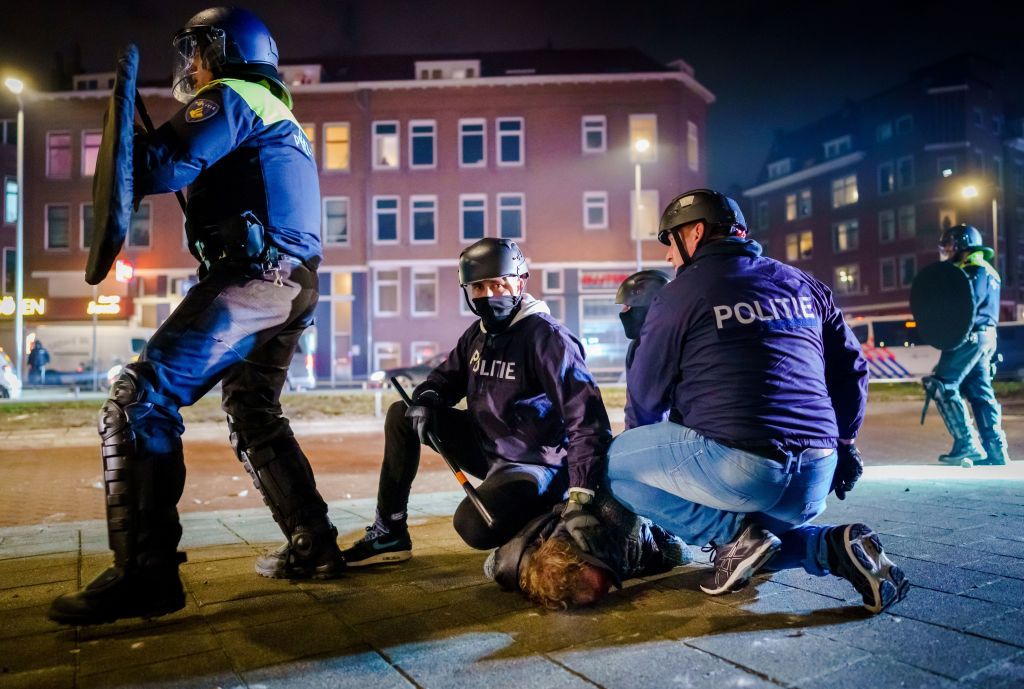 TOPSHOT – Dutch policemen arrest a man during clashes with a large group of young people on Beijerlandselaan in Rotterdam, on January 25, 2021. – The Netherlands was hit by a second wave of riots on January 25 evening after protesters again went on the rampage in several cities following the introduction of a coronavirus curfew over the weekend. Riot police clashed with groups of protesters in the port city of Rotterdam, where they used a water canon. (Photo by MARCO DE SWART/ANP/AFP via Getty Images) 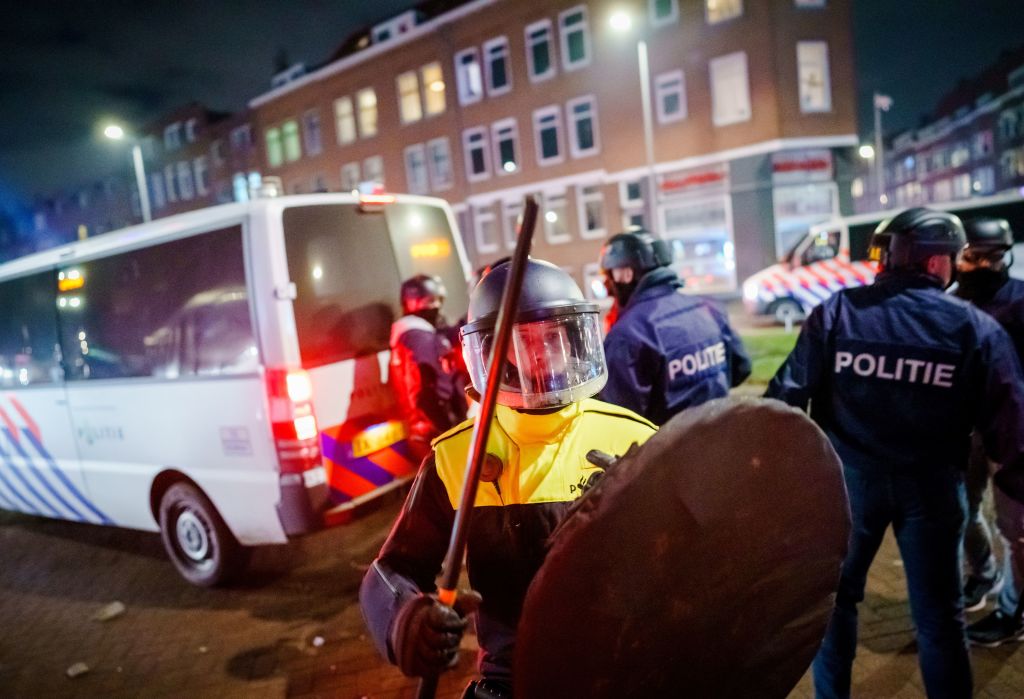 TOPSHOT – A policeman with helmet and shield holds a baton as he stands next to a policevan on Beijerlandselaan in Rotterdam, on January 25, 2021. (Photo by MARCO DE SWART/ANP/AFP via Getty Images)

Police officers have been injured, and forces have deployed water cannon and tear gas against rioters. On Saturday, a coronavirus test centre was set on fire. Germany’s Bild reports that journalists, bus stops, and cars were attacked and that the riots are said to have been the worst since the 1980s, according to a police spokesman.

Unusually, Prime Minister Mark Rutte and the leader of the opposition, right-wing populist Geert Wilders, seem to be in accord, with both men condemning the violence — although their views on specific elements of the unrest and how to deal with the attacks differed.

PM Rutte said on Tuesday that “the riots have nothing to do with protesting or fighting for freedom”. While Mr Wilders said he supported peaceful demonstration against the curfew and against loss of freedoms, the violent riots were well beyond what is acceptable. Going further than the government’s policy, the populist leader then called on the government to deploy the army to the streets against looting “scum”.

Underlining his point, the anti-mass-migration, anti-Islamification leader of the Dutch opposition Freedom Party shared footage of gangs of young men attacking police, looting shops, and setting off large fireworks. He wrote: “[In the Netherlands], the — often immigrant — scum is destroying our country. They have nothing to do with the Netherlands. They do not share our values… Deploy our army now.”

Wilders warned that if the violence were allowed to continue to spread, it risked becoming a small civil war.

Responding in kind, representatives of the Dutch government affirmed on Tuesday they would not deploy the army, with Finance Minister Wopke Hoekstra calling the rioters “a few idiots who misbehave” in a press call. The justice minister said there have been “many” arrests and the government would be demanding “unconditional prison sentences” for rioters, reports Algemeen Dagblad. 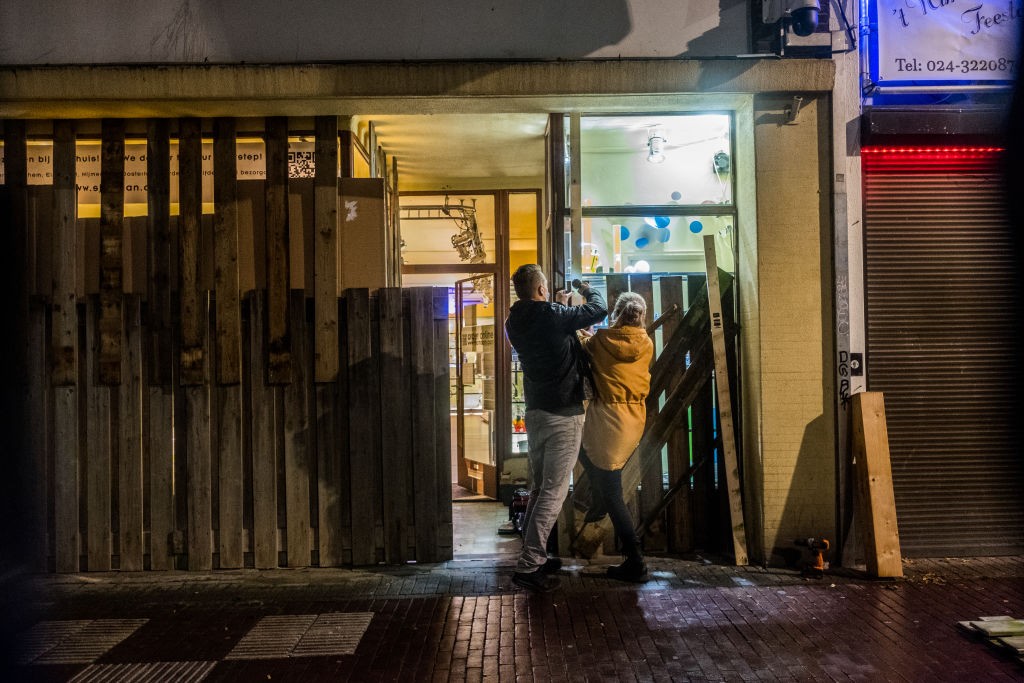 NIJMEGEN, NETHERLANDS – JANUARY 25: Shopkeepers board up their their shop in the city centre through fear of being looted during a second day of rioting on January 25, 2021 in Nijmegen (Photo by Sanne Derks/Getty Images) 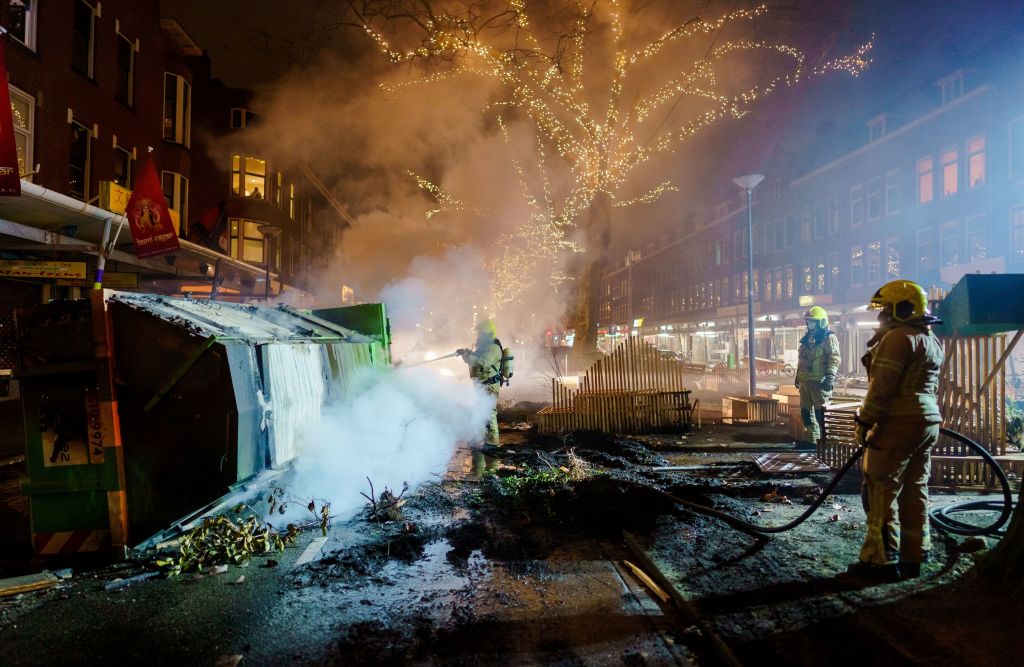 TOPSHOT – Firefighters work to extinguish a fire on the Groene Hilledijk in Rotterdam, on January 25, 2021 (Photo by Marco de Swart / ANP / AFP) / Netherlands OUT (Photo by MARCO DE SWART/ANP/AFP via Getty Images)

The Dutch health minister said in some areas the riots had actually impacted the delivery of healthcare, citing rioters in Den Bosch who attempted to march on the town’s hospital. The facility was locked down and ambulances had to be diverted to other areas.

Feeling remains so high in Den Bosch on Tuesday that shops and schools have closed in the city as unrest and looting continues. Mayor Jack Mikkers has announced emergency powers for police, allowing officers the right to search anyone in some areas of the city without giving reason.

Britain’s Daily Telegraph cited the comments of a protest organiser who has been before the courts, when he said that when the government made peaceful protest impossible, it made violent protest inevitable. Ab Gietelink said: “There have been organised demonstrations since last April, but the government has undermined them by banning them or imposing absurd requests like a limit of 100 people, standing on spots 1.5m apart and wearing facemasks.

“The government, mayors and police made the demonstrations impossible so people came together anyway, to drink coffee, police told them to go and then started violently chasing them with water cannon, tear gas and mounted police… A pacifist, peaceful organisation, because of the government’s escalation, became a kind of violent uprising.” 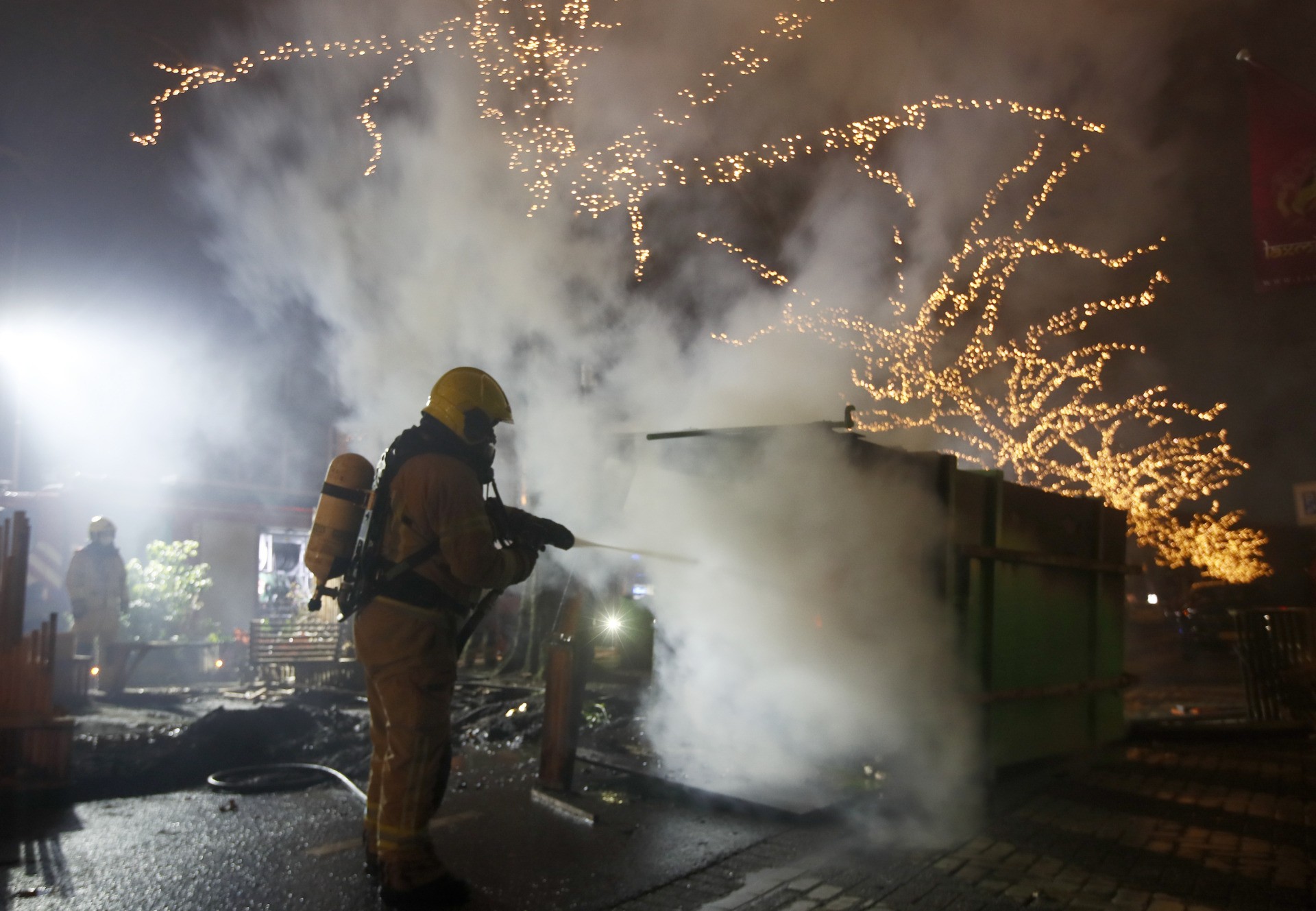 A firefighter extinguishes a container that was set alight during protests against a nation-wide curfew in Rotterdam, Netherlands, Monday, Jan. 25, 2021. (AP Photo/Peter Dejong) 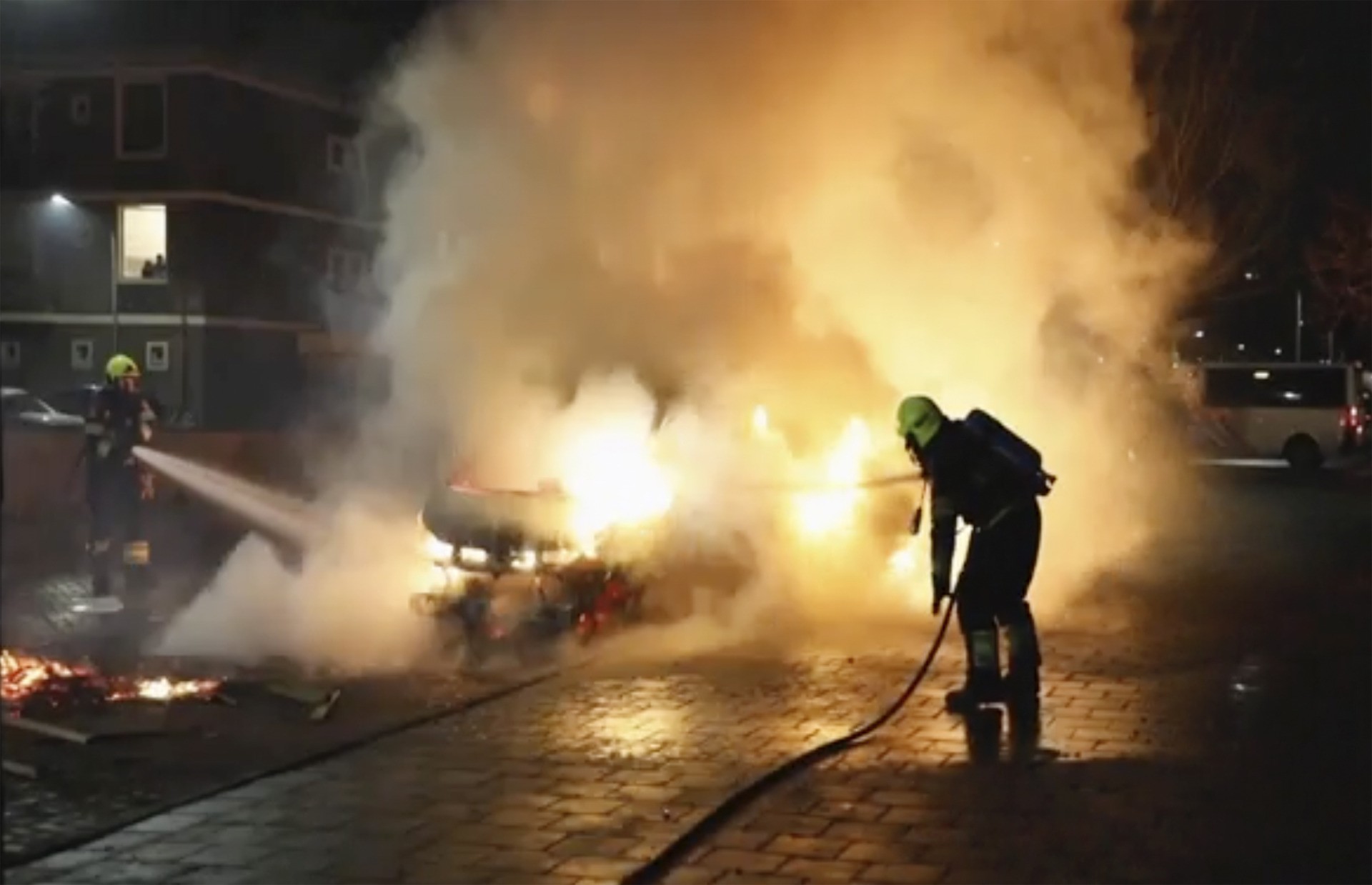 In this grab taken from video on Monday, Jan, 25, 2021, firefighters extinguish a vehicle set on fire by rioters, in Haarlem, Netherlands. Groups of youths have confronted police in several Dutch cities defying the country’s coronavirus curfew and throwing fireworks. Police in the port city of Rotterdam used a water cannon and tear gas in an attempt to disperse a crowd of rioters Monday night. (Mizzle Media via AP) 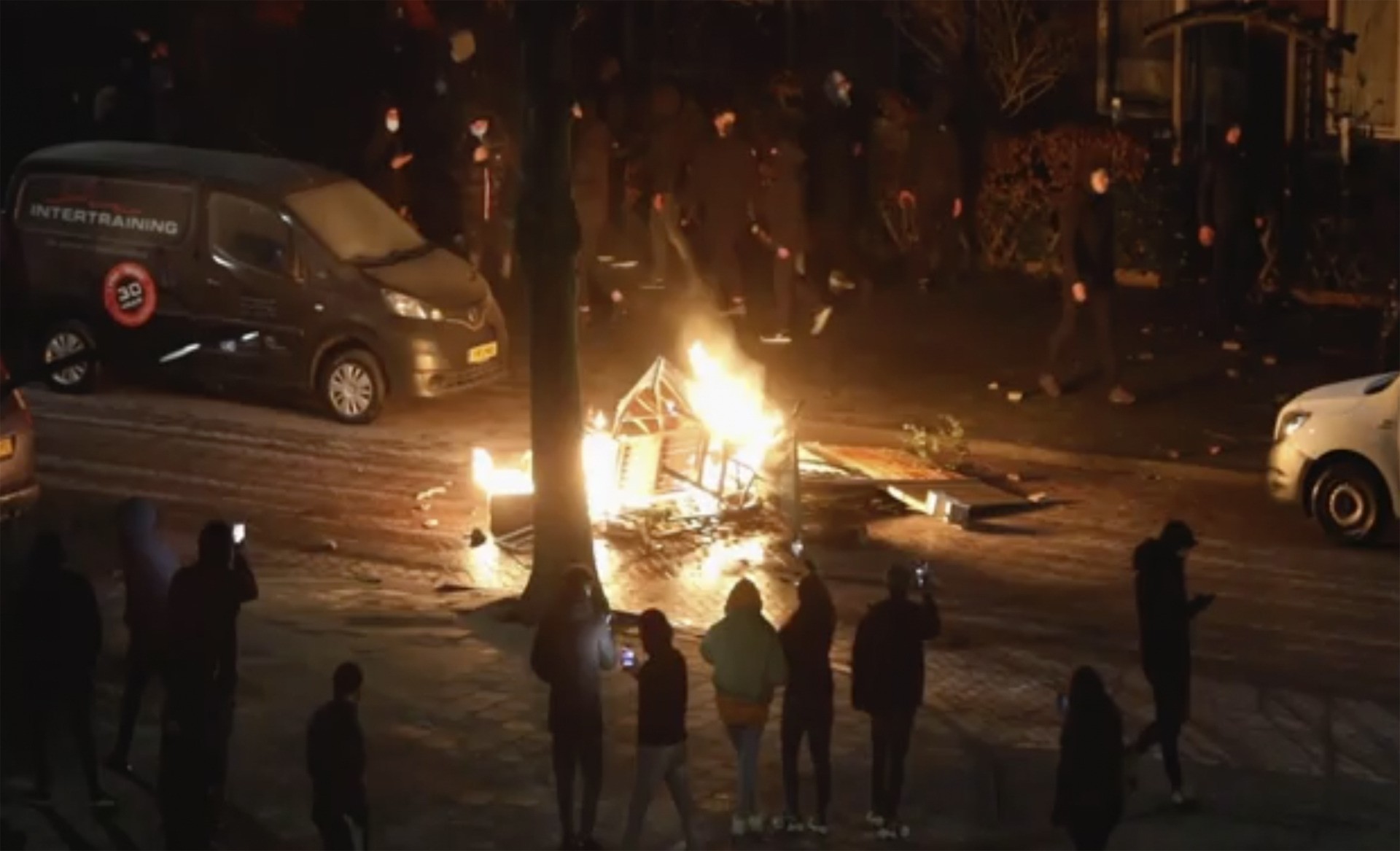