Few Scotland players chose to kneel to Black Lives Matter ahead of a historic victory over England in the Six Nations rugby tournament, triggering a woke backlash.

The Scots won the Calcutta Cup from England on their much larger neighbour’s home soil for the first time since 1983 — in a stadium which was largely empty, thanks to the anti-coronavirus lockdown — but the win has been somewhat marred by a furore over what the BBC has dubbed “kneegate”.

“#AsOne is the message from Scottish Rugby. But the players don’t seem to be ‘as one’ in their stance against racism,” complained Sky Sports News editor Anthony Joseph.

“It’s less about ‘they should kneel’ and more about ‘why wouldn’t they?'” he continued, somewhat contradictorily.

“What do they feel so strongly about to not be part of an anti-racism gesture?” he added, undercutting the notion that kneeling to BLM is an entirely voluntary act, at least insofar as there is a certain expectation that those who choose not to kneel to it should have to justify themselves in some way.

#AsOne is the message from Scottish Rugby. But the players don’t seem to be “as one” in their stance against racism. It’s less about ‘they should kneel’ and more about ‘why wouldn’t they?’ What do they feel so strongly about to not be part of an anti-racism gesture? https://t.co/nbYqroWRUS

A majority of English players did kneel to Black Lives Matter, but seven opted not to do so — including Billy Vunipola, an Australia-born athlete of Tongan descent.

Breitbart London has reported on how Vunipola has spoken out against BLM before, having said in 2020 that “what I saw in terms of that movement was not aligned with what I believe in. They were burning churches and Bibles. I can’t support that.”

“Even though I am a person of colour, I’m still more a person of, I guess, Jesus,” he explained. 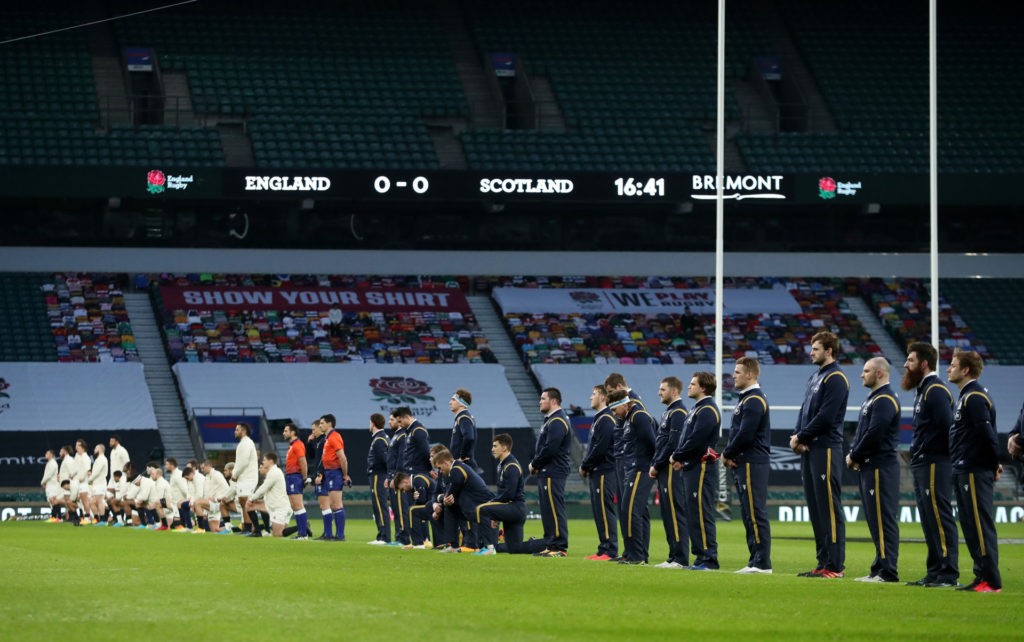 LONDON, ENGLAND – FEBRUARY 06: The 2 team’s take a moment to acknowledge Rugby Against Racism prior to the Guinness Six Nations match between England and Scotland at Twickenham Stadium on February 06, 2021 in London, England. Sporting stadiums around the UK remain under strict restrictions due to the Coronavirus Pandemic as Government social distancing laws prohibit fans inside venues resulting in games being played behind closed doors. (Photo by David Rogers/Getty Images)