The Home Office has reported more than 10,000 suspected cases of modern slavery in the UK last year, though the effects of lockdown mean that the figure could be even higher.

The statistics published on Thursday revealed that there were 10,613 potential cases of modern slavery detected in 2020, only slightly lower than in 2019, when 10,616 cases were identified.

Home Official officials suspect that the plateau in figures may have been due to fewer opportunities for slavery victims to interact with emergency services or travel due to a year of coronavirus restrictions. 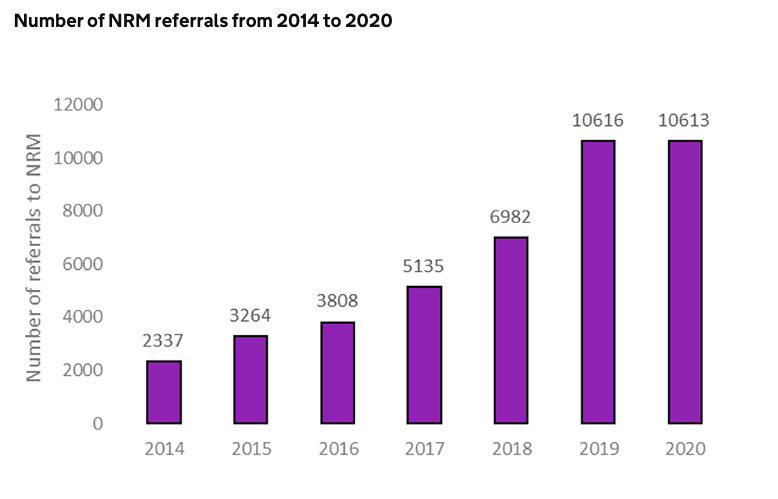 Nearly two-thirds (63 per cent) of alleged victims said that the slavery took place solely in the United Kingdom, with London’s Metropolitan police handling almost a third of all referrals, followed by West Midlands Police which dealt with seven per cent.

By nationality, the most common victims were British (34 per cent), “who were primarily referred for criminal exploitation”, the report said, followed by Albanians (15 per cent), and Vietnamese nationals (six per cent).

The Home Office found that the most common form of slavery for adults was forced labour and for minors was criminal exploitation. The number of child potential victims increased from the year before (4,547) to 4,946 — 47 per cent of all referrals for 2020.

The form of organised crime relates to drug dealers expand their trafficking networks out of metropolitan areas into the suburbs and country by exploiting vulnerable children to transport drugs, with gangs using burner mobile telephone “lines” to communicate drugs orders.

The issue of adult forced labour came to media prominence last year in light of coronavirus restrictions, after a coronavirus hotspot in Leicester was potentially linked to garment factories that may have been using forced or illegal labour practises.

The National Crime Agency (NCA), the British equivalent of the FBI, said in July 2020 that it was investigating human trafficking and modern slavery in the multicultural Midlands city, with reports that staff were forced to work in the factories during lockdown without proper health measures in place, earning less than half of the hourly minimum wage.

Home Secretary Priti Patel later suggested that police were reticent to intervene over suspected cases of slavery at the sweatshops, operated and staffed by South Asian-heritage people, because of “cultural sensitivities”.

One Sikh community leader said that the illegal practices at sweatshops had been going on in Leicester “for decades” but that police had been “loath to do anything about it for fear of being accused of picking on immigrant or refugee communities, as a lot of the exploited workers are of Indian background”.

A report from the Centre for Social Justice think tank from July estimated that there were 100,000 modern slaves working in the UK, 10,000 in Leicester alone.