Brexit leader Nigel Farage declared that “London in 2021 is not a safe place to be” following footage emerging of pro-Palestinian activists attacking a car during a demonstration against Israel on Saturday.

London’s Metropolitan Police Service (MPS) said that the National Demonstration for Palestine passed without “any significant incidents”. However, in a statement, the Met did corroborate footage shared online of a band of Palestinian flag-waving thugs attacking a car that was passing by.

MyLondon reported on the incident, and the video was also shared on social media by Vivian Aisen, a diplomat and the director of public diplomacy at the Embassy of Israel in London.

Ms Aisen wrote on Twitter in the post accompanying the footage: “Crazy people walking free in the streets of London! #Hamas #ISIS #MuslimBrotherhood #Palestinian Islamic Jihad #Hezbollah #Iran: they are all the same. Jihad led ideologies, fighting the Western civilisation and the Judeo-Christian ethics. We need to fight back!”

Sadiq Khan and the Met police need to get a grip quickly. pic.twitter.com/IQYt6GWGaI

Scotland Yard added that officers were also assaulted with makeshift missiles during the protest.

Following hours of speeches in Hyde Park from Muslim and leftist activists, as well as from far-left Labour Party MPs including former leader Jeremy Corbyn, John McDonnell, Naz Shah, and Zarah Sultana, groups of activists began roaming the streets of the British capital.

“Damage was caused to a passing car and some missiles were thrown at officers. Efforts to engage with the group proved unsuccessful,” the Met said.

“In order to prevent a further breach of the peace and to ensure the safety of the wider community, the group was contained by officers and released in a controlled manner with those responsible for offences arrested and the remainder ordered to disperse,” the force added.

Sharing footage of the attack on the car, Brexit leader Nigel Farage said: “London in 2021 is not a safe place to be. Sadiq Khan and the Met police need to get a grip quickly.” 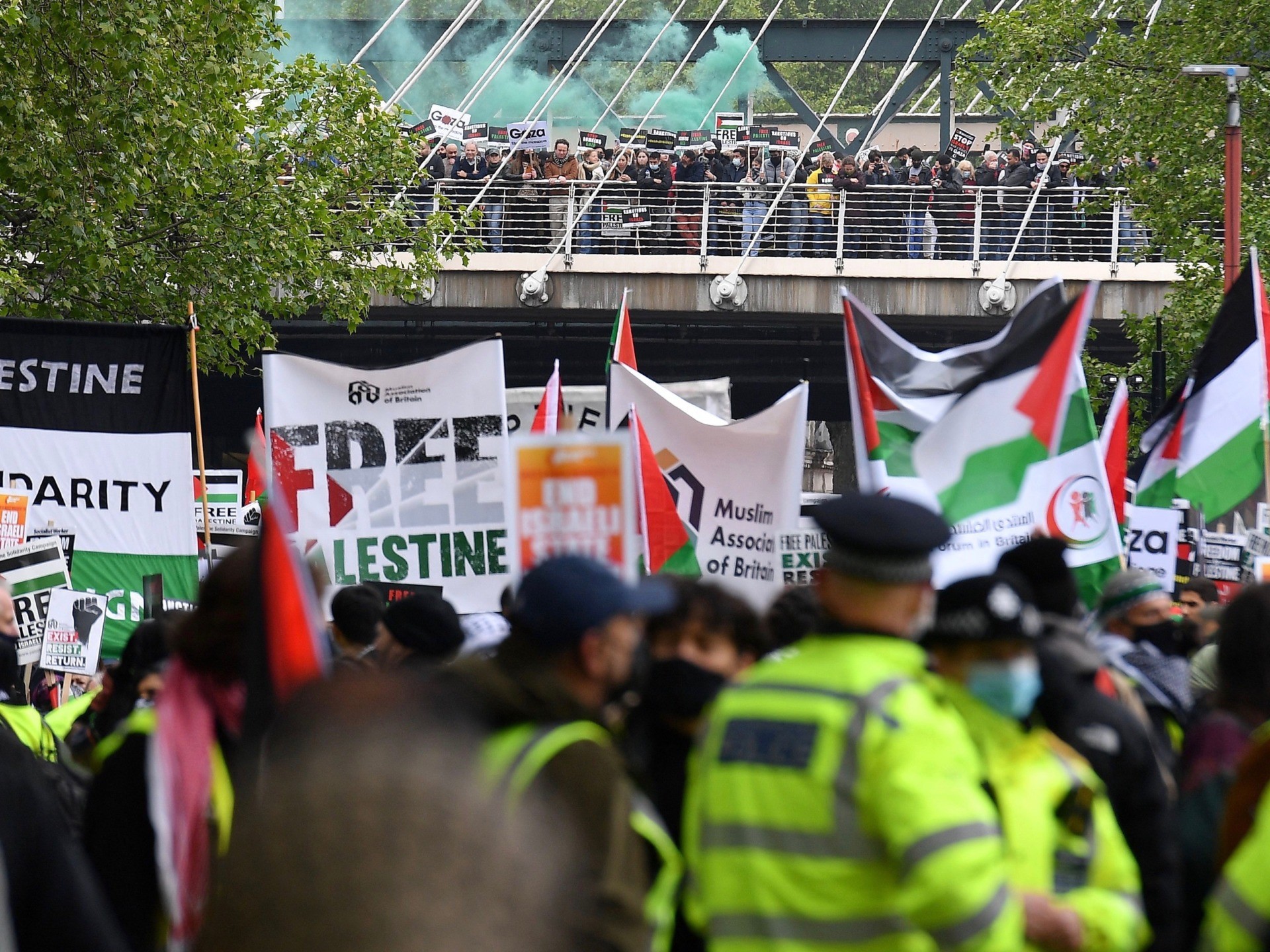 Chief Superintendent Andy Walker, who led the police operation during Saturday’s protest, said: “Today we saw a significant number of people gather in central London to take part in a demonstration. Our policing plan was successfully implemented and I am pleased that the main event was facilitated safely and without incident.

“We reacted quickly to the decision by a small group to break away from the main protest and where offences were identified, arrests were made.

“As we emerge from the Covid-19 pandemic we are still striking a careful balance between the rights of demonstrators and the need to keep Londoners safe and prevent a resurgence of the virus. I am grateful to the majority of those who attended this event, and to our officers, for helping to achieve those objectives today.” 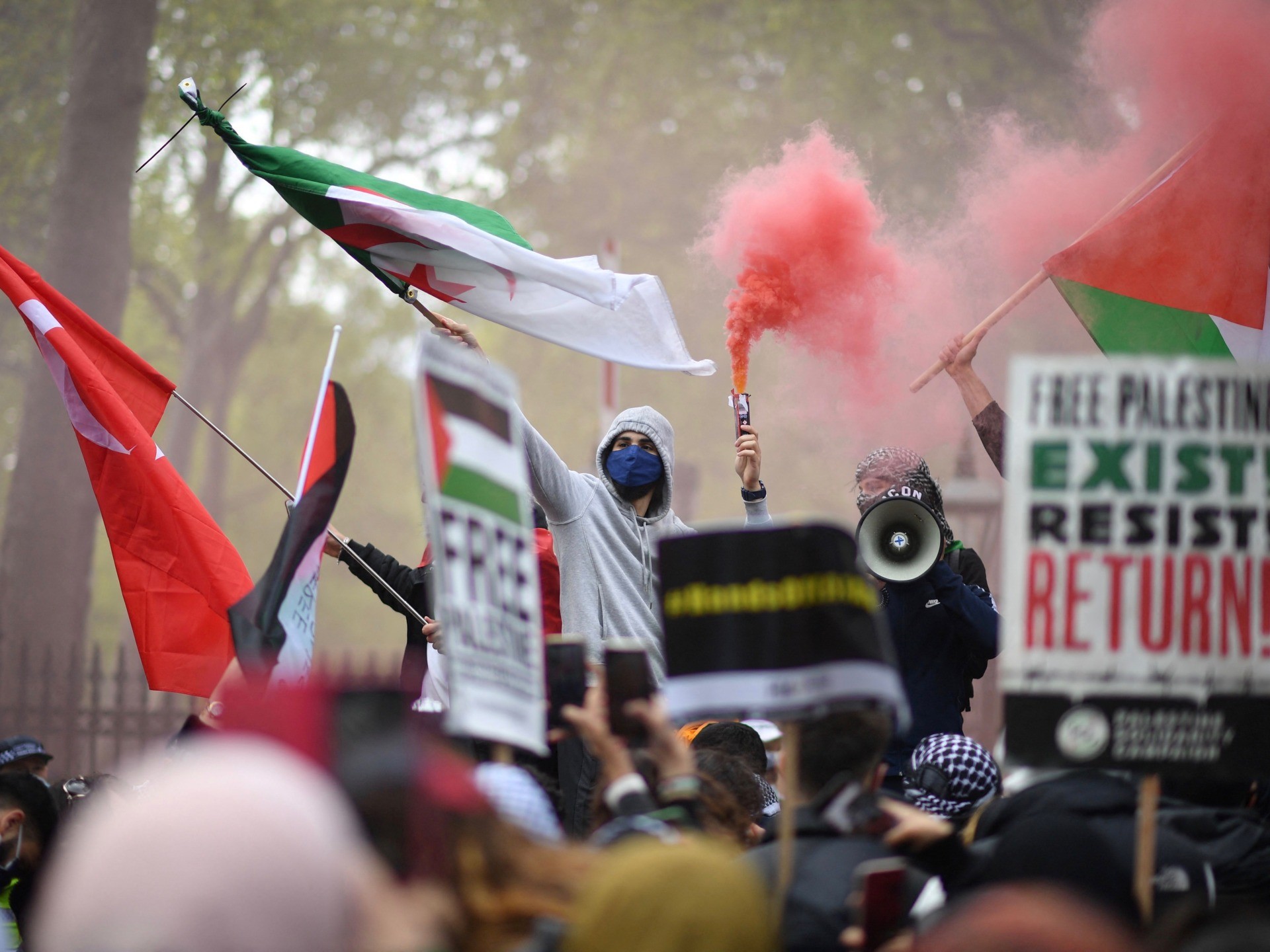 Amid the revival of violence in the Israel-Palestine conflict in recent weeks, there has also been an increase in antisemitic incidents in Britain.

Appearing on Sky News on Sunday, Isreal Embassy spokesman Ohad Zemet told Trevor Philips that he is deeply concerned about the rise of antisemitism in the UK.

“What we have seen is the same ideology that we’ve seen in Gaza, the same jihadi ideology… Now with social media we see it here, we’ve seen it in front of the Israeli embassy, Israeli flags torn up, rocks fired at the police, and this convoy, this ISIS-like convoy chanting death to Jews and rape to their daughters, this is appalling,” Zemet said.

Last Saturday, a similar ‘Free Palestine’ demonstration was held outside the Israel embassy in London. Police were attacked by radicals chanting “Allahu Akbar” while pelting officers with makeshift missiles and wooden sticks.