Mass migration has driven Britain’s foreign-born population to nine million and the ethnic minority population to 13 million in just 20 years, according to new figures from Migration Watch UK.

The massive shift in demographics has come about as a result of the fact that “foreign migration has been running at about 300,000 per year for the past 20 years” — Britain’s Armed Forces are comprised of around 159,000 personnel, trained and untrained, for comparison’s sake — coupled with generally higher birth rates among the migrant and migrant-descended population.

The report notes that “34 per cent of births in England and Wales in 2019 involved at least one parent who was not born” there.

The report notes that “the non-UK born population [has] double[d] to nine million” over the last 20 years, while “the ethnic minority population, whether or not born in the UK, has more than doubled to thirteen million, increasing their share of the population from 10 per cent to just over 20 per cent”.

This figure includes “those who identify as ‘Other White’ (mainly from the EU)” as well as so-called “visible minority ethnic” or VME individuals.

To put all of this in context, the total populations of Scotland, Wales, and Northern Ireland are estimated at a little under 5.5 million, 3.2 million, and just 1.9 million, respectively.

As things now stand, Migration Watch estimates that “about 90 per cent of population growth between 2017 and 2019 was linked to the impact of arrivals from abroad and their subsequent UK-born children”, and warns that the “very rapid changes” to the population “raise issues that go well beyond the previous debate about net migration.”

“The native element of our population has gone down to 79 per cent while the total minority population has doubled to over 21 per cent” stressed Migration Watch chairman Alp Mehmet — himself of Turkish Cypriot descent — in comments to Breitbart London.

“If immigration continues at its current rate those proportions will continue moving in the direction they are now going in, one down, one up,” he explained, adding that the think tank would be “addressing the impact and consequences in further papers and analysis.” 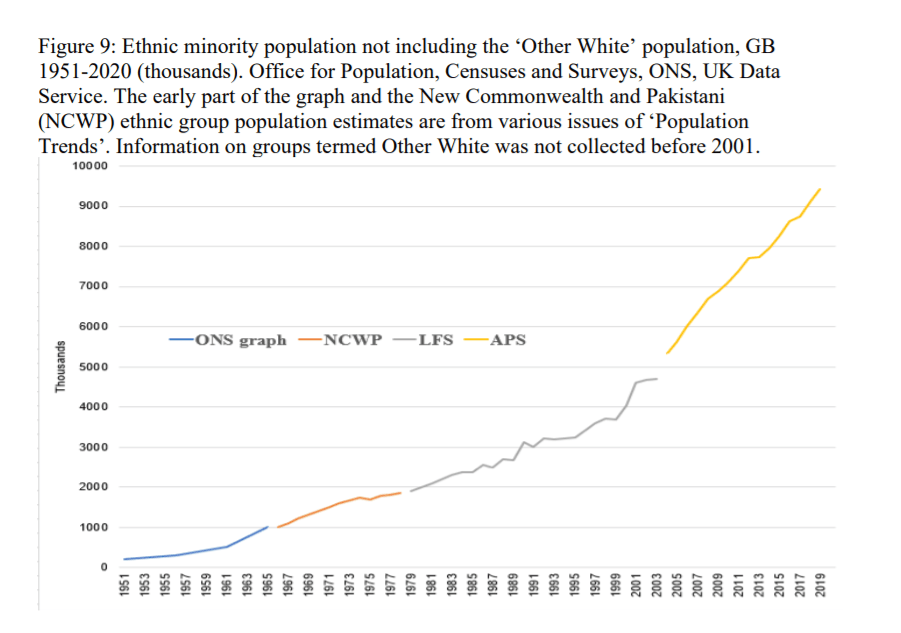 Migration Watch has previously warned that the supposedly tough new points-based immigration system being introduced by Prime Minister Boris Johnson, ostensibly to deliver on promises he made while campaigning for Brexit back during the EU referendum, will in fact likely see immigration rise, as it makes it easier rather than harder for many people to qualify as legal migrants.

“We cannot, of course, be sure that immigration will resume at its previous levels once the COVID crisis has subsided but the government’s major post-Brexit loosening of the global visa system makes this very likely,” the think tank reiterates in its new report.

“[The Johnson administration] has sharply reduced both the salary and qualification requirements for a work visa, exposing some seven million UK jobs to new or increased international competition,” it adds.

The Tory government is faring little better on illegal immigration, with the number of boat migrants alone thought to be on track to exceed 20,000 in 2021 — although despite its dominance of what few illegal immigration-related headlines there are in the mainstream media, this is by no means the only method of taking up residence in Britain unlawfully.