Ukrainian officials have accused the Russian Military of committing war crimes after an alleged bombing of a kindergarten, in which two children were reportedly seriously injured and three people are said to have died.

On Friday, Ukraine’s Minister of Foreign Affairs Dmytro Kuleba said that his government will file a complaint to the International Criminal Court (ICC) at The Hague against Russia for “war crimes and violations of the Rome Statute”.

Kuleba claimed that the government will present evidence of a Russian attack on “kindergartens and orphanages”, vowing “responsibility is inevitable”.

Under the Rome Statute of 1998, the ICC declared that it is a war crime to intentionally direct attacks against civilian targets. The statute goes on to specify that such areas include “buildings dedicated to religion, education, art, science or charitable purposes, historic monuments, hospitals and places where the sick and wounded are collected, provided they are not military objectives.”

While the Foreign Affairs Minister did not publish evidence of the alleged attack, the governor of Ukraine’s Sumy province, Dmytro Zhyvytskyi shared a graphic image on his Telegram channel of what he claimed was the aftermath of a bombing of a kindergarten in Okhtyrka.

“The civilians did not have time to reach the basement! Kingdom of heaven,” Zhyvytskyi wrote.

The governor later said that as a result of the alleged bombing, three people were killed on the spot, seventeen were wounded, and two children were seriously injured. 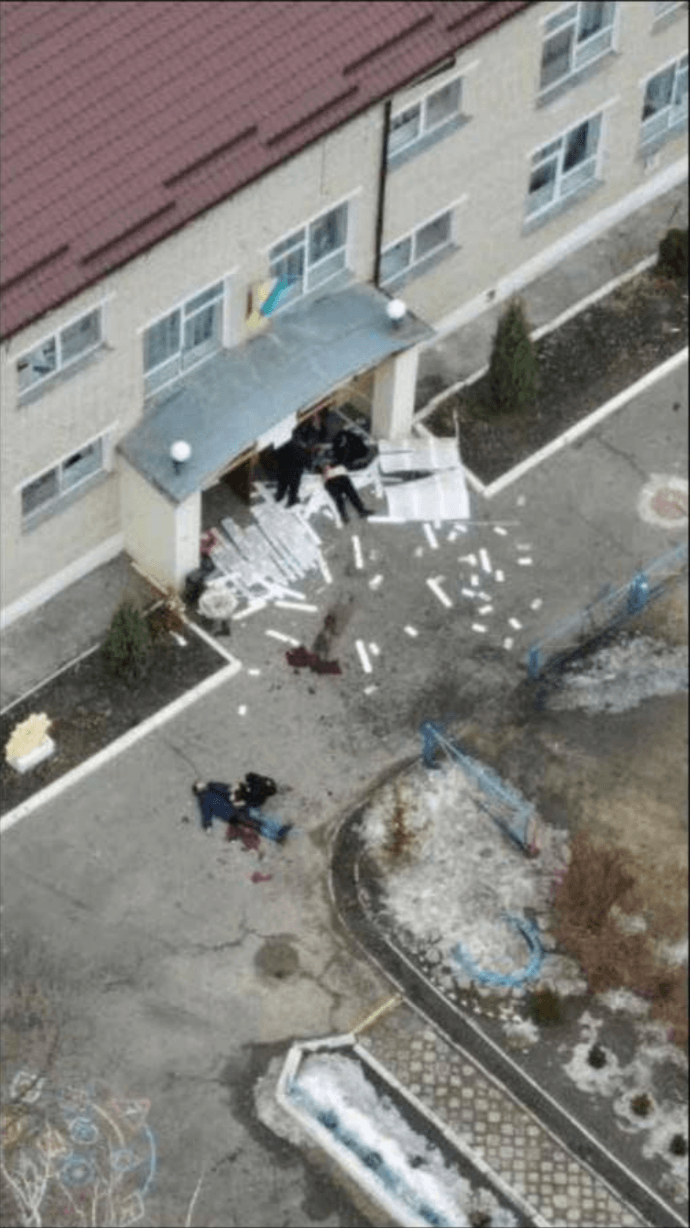 Dead bodies appear to lay outside a kindergarten in Okhtyrka, Ukraine, in an image shared by the governor of Ukraine’s Sumy Province, Dmytro Zhyvytskyi on his Telegram channel.

While Russia has denied that it has been attacking civilian targets, Ukrainian President Volodymyr Zelensky claimed that this was “a lie”.

Addressing the nation, the President said: “Just as yesterday, the military and civilians are equally under Russian attack. The purpose of this attack is to put pressure on you, the citizens of Ukraine, to put pressure on our entire society. I emphasize: not just on the government – on all Ukrainians.”

According to the state-owned news agency Ukrinform, Russian forces have targeted 33 civilian facilities since fighting broke out after a full-scale invasion was launched by Russian strongman Vladimir Putin on Thursday. The report went on to claim that two children have so far been killed in Russian attacks.

On top of the claimed civilian casualties, the shelling of the Sumy area threatens to disrupt critical infrastructure including the “main gas pipelines in Ukraine” an advisor to the Interior Minister, Vadym Denysenko said according to the state news agency Interfax.