A protester has attacked the central London flagship store of Balenciaga after a week of global controversy for the luxury goods chain.

Street artist Joe Bloggs— self-described as The Average Man on the Street—plastered the word “paedophilia” using the British spelling of the word—on the window of the outlet.

Footage of the graffiti attack shows a man wearing a neon yellow vest appearing to attach something to the front window of the designer store.

He then steps back to reveal the word “paedophilia” daubed in a vinyl sticker clearly visible underneath the corporate logo.

TikTok user IvoryFlourCakes caught Bloggs in action and posted a video of them defacing the window to their account.

Watch the graffiti attack unfold below:

The protester appeared to be wearing a yellow hi-visibility vest with the words “JC Defaux” on the back. “Faux” means fake in French and appears to replicate outdoor marketing company, JCDecaux.

The graffiti appeared across the Balenciaga store in Bond Street on Friday evening and there is no indication if it has since been removed.

The attack follows a week of controversy for Balenciaga after it launched an advertising campaign that featured children holding BDSM-clad teddy bears, as Breitbart News reported. 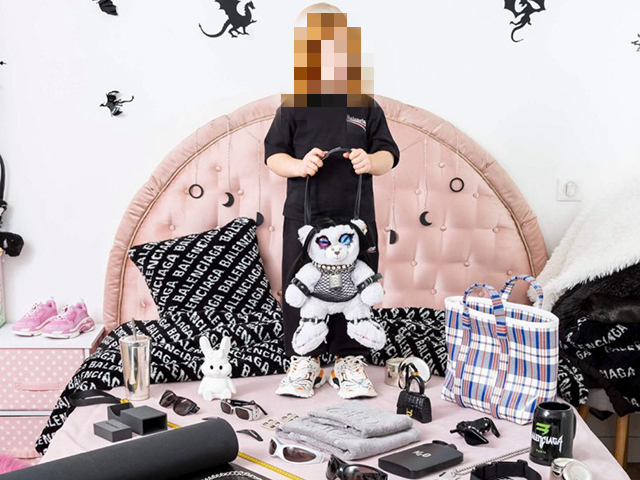 Balenciaga apologized in the wake of the intense social media backlash last week, pleading the company did not approve of the pictures and they “strongly condemn abuse of children in any form.”

“We stand for children safety and well-being,” the company said. “We sincerely apologize for any offense our holiday campaign may have caused. Our plush bear bags should not have been featured with children in this campaign.”

Balenciaga has since filed a $25 million lawsuit against the producers of the advertising campaign.

Nicole Kidman is featured in Balenciaga’s spring 2023 collection , while Kim Kardashian and Bella Hadid have been previous brand ambassadors.