Unidentified vandals broke into the Church of Saint-Jean-des-Cordeliers in southwest France Tuesday and jimmied open the tabernacle to steal the consecrated hosts.

According to the attentive folks at L’Observatoire de la Christianophobie, the vandals broke into the church, located in the town of Bergerac in the Dordogne region, sometime in the afternoon, and stole both the hosts and the ciboria (covered metal vessels) that held them.

The theft of consecrated hosts often occurs in conjunction with Satanism, since the Satanic rite called a Black Mass is performed using the consecrated bread, which Catholics believe to be the body of Jesus Christ. 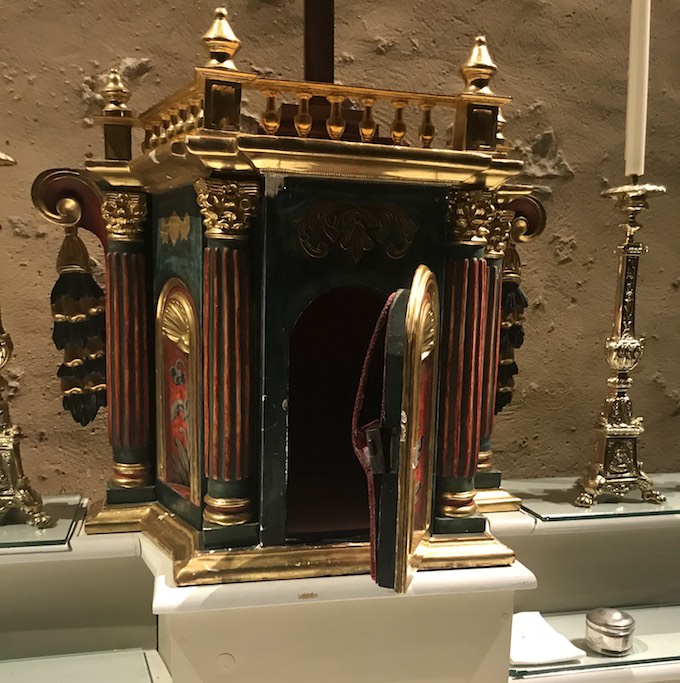 As Irish priest Father David Jones noted in late 2018, the growth of Satanic cults has seen a corresponding rise in demand for consecrated hosts.

We know that “consecrated hosts go missing from churches every month to be sold on the black market and desecrated in satanic rituals,” Father Jones said.

“It’s very easy to get sacred hosts in Ireland. We know from CCTV that people go to churches when no-one is there and many priests and sacristans are careless about leaving the key to the tabernacle around or in a places that is easily guessed,” he said.

Last year, Catholics in the United States raised an alarm when the e-commerce company Etsy.com posted an ad for “Real Catholic Hosts, consecrated by a priest.”

Sold by a business called “Pentagora,” the ad stated that the purpose of the nine hosts was “to abuse for classic black fairs or black magic purposes.”

Profanations of churches and other Christian sites has been steadily rising in Europe, and particularly in France, and theories for the increase extend from the growth of secularism and paganism in the country to the mass immigration of Muslims.

In March, vandals broke into the Church of Saint Pierre-Saint Paul in the town of Trémorel, northwest France, and profaned the hosts but did not steal them.

“The tabernacle was forced and the consecrated hosts contained in the ciborium were thrown to the ground and dispersed,” said the local bishop of Saint-Brieuc, Denis Moutel. “This act seriously hurts the faithful since it touches the Eucharist, the most sacred reality of our faith.”

The greatest number of acts of violence against Christian sites have occurred in France, where churches, schools, cemeteries, and monuments “are being vandalized, desecrated, and burned at an average rate of three per day,” according to reports citing government statistics.

Police and mainstream media almost always censor information about the identities and ethnic backgrounds of the perpetrators, however, so it is difficult to get a clear idea as to who is committing the crimes and the motives behind them — especially when they are religiously driven.

According to Bishop Dominique Rey of Fréjus-Toulon, we are “witnessing the convergence of laicism – conceived as secularism, which relegates the faithful only to the private sphere and where every religious denomination is banal or stigmatized – with the overwhelming emergence of Islam, which attacks the infidels and those who reject the Koran.

“On one hand, we are mocked by the media that discredit the action of the Church, in particular regarding sexual abuse, and on the other, there is the strengthening of Islamic fundamentalism. These are two joint realities,” he said.