ROME — Pope Francis traveled to the island nation of Cyprus Thursday, where he told a gathering of priests and religious that there are “no walls in the Catholic Church.”

The Church is catholic, “that is, universal, an open space in which all are welcomed and reached by the mercy of God and the invitation to love,” the pontiff asserted in the Maronite Cathedral of Our Lady of Grace in Nicosia.

During his discourse, the pope credited immigration for giving the Church a “multicolored” visage.

The Latin Church, present in Cyprus for millennia, “has seen the enthusiasm of faith grow together with its children and today, thanks to the presence of so many migrant brothers and sisters, it presents itself as a ‘multicolored’ people, a real meeting place between different ethnic groups and cultures,” he said. 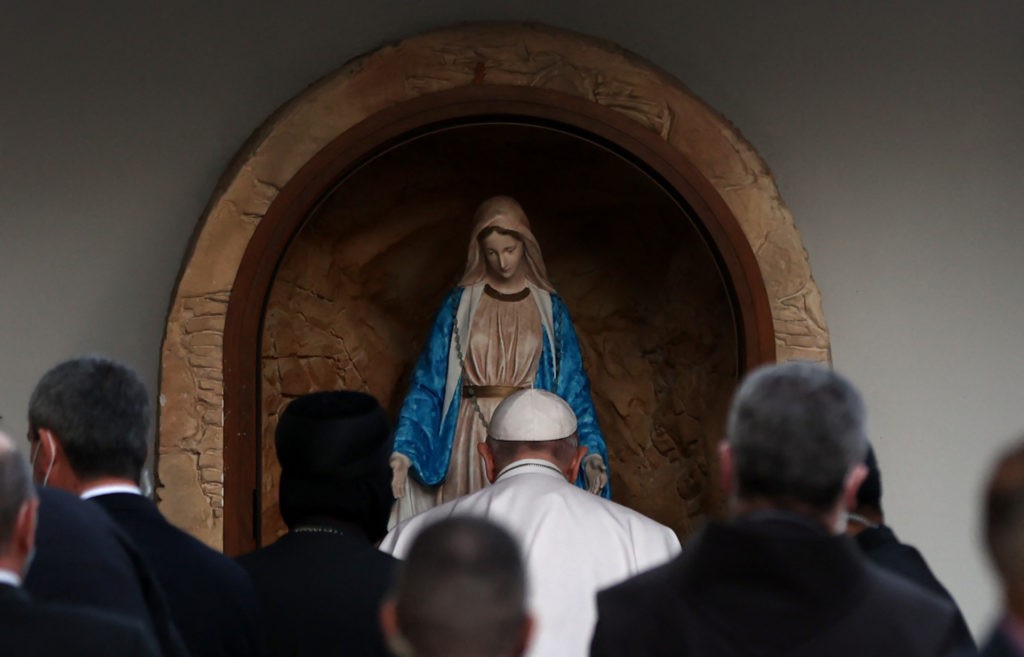 Pope Francis (C) stops by a statue of the Virgin Mary at the Maronite Cathedral of Our Lady of Grace in Old Nicosia on his first stop following his arrival in Cyprus on December 2, 2021. (CHRISTINA ASSI/AFP via Getty Images)

“This face of the Church reflects the role of Cyprus in the European continent: a land of golden fields, an island caressed by the waves of the sea, but above all a history that is intertwined with peoples and a mosaic of encounters,” he declared.

As he has done on other occasions, the pope railed against proselytism as unworthy of Christians.

In a nation that has borne the brunt of many months of mass immigration, the pope encouraged openness to newcomers.

The Church “does not allow itself to be upset and disturbed by changes, but serenely welcomes novelty and discerns situations in the light of the Gospel,” he said. “On this island, the work you do in welcoming the new brothers and sisters who come from other shores of the world is precious.”

“You are immersed in the Mediterranean: a sea of ​​different stories, a sea that has rocked many civilizations, a sea from which people, peoples and cultures from all over the world still disembark,” Francis said. “With your fraternity you can remind everyone, the whole of Europe, that to build a future worthy of man it is necessary to work together, to overcome divisions, tear down walls and cultivate the dream of unity.”

“We need to welcome and integrate, to walk together, to be all brothers and sisters!” he said. 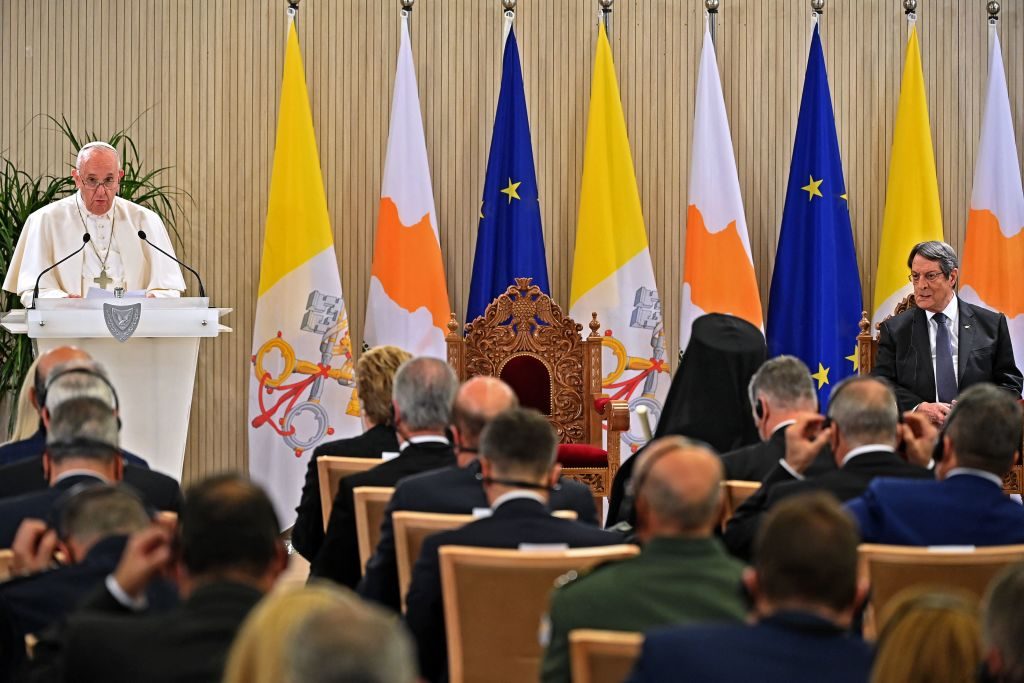 Pope Francis (L) speaks during his welcome ceremony at the Presidential Palace in Cyprus’ capital Nicosia on December 2, 2021. (ANDREAS SOLARO/AFP via Getty Images)

Last May, Cyprus declared a “state of emergency” because of the flood of migrants overwhelming its reception centers and appealed for help from the European Union.

“Due to this situation and overcrowding in reception centers, I was forced to make a written representation to the European Commission,” said Interior Minister Nicos Nouris.

Nouris informed the commission that Cyprus was “entering a state of emergency as far as migration is concerned, and there is no further capacity to host additional migrants.”

Cyprus is divided into two parts separated by the U.N.’s so-called “green line.” The territory under the line, which comprises approximately 59 percent of the surface area, remains in effective control of the Republic of Cyprus, whereas the zone to the north is run by the self-proclaimed Turkish Republic of the North of Cyprus, occupied by Turkey in 1974.

The majority of the migrants that continue to stream into Cyprus enter in the Turkish-occupied north and locals describe their entries as “illegal crossings,” accusing Turkey of sending the migrants on purpose in order to destabilize the south.