New York Magazine is using its cover photo to celebrate a woman who cut off her breasts and had a tube of flesh from her leg surgically added to her groin.

The article by author Gabriel Mac is headlined: “My Penis, Myself; I didn’t need a penis to be a man. But I needed one to be me.”

The display is a visceral and anti-female rejection of women and their bodies, says a barrage of comments from stunned women.

“Most of us have had a body dysmorphia & traumatic sexual experience & now we’re seeing an abandonment of womanhood celebrated as the solution,” tweeted Sall Grover, the CEO of a social media company for women. “It’s too sad to comprehend,” she tweeted.

“It is not true you can change your sex — it’s just not true,” said Natasha Chart, a professional adviser for non-profit groups. So the surgery and the long-term health care burden cannot be a solution for the unfair civic and sexual pressures that are pushing so many young people to try to change their sex with knives, she said.

“The kind thing to say is ‘I can see you’re struggling, I don’t think it will help you to cut off body parts,'” Chart told Breitbart News.

Twitter comments echoed this combination of pity and sympathy for the surgically altered woman:

Me too. It's if I was looking at woman-hating written in flesh.

“It’s horrific,” said a tweet by @RecklessGoddess. “As a teenage girl I felt my own body was a danger to me and I longed to escape it, but thank God being butchered like that was not an option back in the eighties. I get wanting to escape womanhood, but THAT is not the answer.”

“This is not a cure, it is a symptom,” tweeted @KodaScott1. “All I see in this story is a woman’s desperate dark solution to, or reflection/enactment of how much women are hated, and the appalling effects of male violence on the psyche.

“It’s not even the actual abandonment,” of womanhood, said @Bornnotwork. “It’s the celebration of it.”

Social conservatives are also appalled at the magazine’s celebration of self-mutilation. Rod Dreher at The American Conservative wrote:

It is important to understand that Gabriel Mac (meaning a person like her) is a hero to the cultural Left in our country, which, having gained control of the institutions of American society — including, as you have been reading on this blog, the US military — is setting out to compel all of America to accept that Gabriel Mac, a suicidal, phallus-obsessed, mentally ill woman who now has both a Frankenpenis and a vagina, is, in fact, a man.

We are mad. We are decadent. And we are going to fall hard.

You might wish to believe that you can get away by ignoring this phenomenon, ascribing it to the cultural fringes. You could not possibly be more wrong. The ideology that celebrates what Gabriel Mac has done to herself is normative among American elites, and that means that it controls the future of our society. This ideology is coming for you and your kids. You had better wake up now.

Mac, the author, has a tortured history that is entwined with her journalistic coverage of war-torn countries.

If there was anything I had learned in transitioning, it was that what was right for me was rarely what, according to my patriarchal, heterosexist, racist, capitalist acculturation, “made sense” — which, obviously, could only be to live as a sexually available cute-lady vessel capable of carrying white babies. It’s impossible to articulate and maybe even to know exactly why my vagina is integral to my power and my personhood. “I cannot wait to be more masculine so I can be more feminine,” I used to write in journals as I started transitioning and realized, though I didn’t quite understand why, that was what I needed.

The fuel powering the transgender trend is the unfair treatment of women and the increasingly toxic pressure of online pornography and social media on young women, said Chart, a left-wing feminist.

People need to address civic and personal problems without resorting to quick-fix pseudo-cures, she said. For example, people recognize that quick-fix cures cannot solve their desire to eat heavily and also stay slim, she said:

Everybody knows how to be healthy. They know you can’t overeat. You’ve got to exercise more. Everybody knows that. But what people want is some kind of pill they can take so they don’t have to do that work of controlling themselves and exercising. We want the easy path. Everybody wants that. It’s nothing to be ashamed of. But you have to struggle with [reality] and look for the thing that’s productive.

The message to young women facing sexual and sexist pressure, she said, should be understanding and support, not surgical rejection of their sex: “Look, I know you’re struggling with life, I can tell. But this [sex change option] is not true.”

Until [sympathetic] people can really grapple with that [message], there is no solution because they will keep struggling with wanting to be kind and not realizing that … accepting this untruth [of sex change by hormones and sex change] means telling troubled young women that they need to go get their breasts cut off [and] it means telling troubled young men that probably castration is their better option.

The civic problem is worsened by progressive men who are eager to downplay their sexist dismissal of women, she said. “Progressive men believe that they are not sexist, ever … so, therefore, they don’t have to listen to women … Women don’t have the power to speak up against it within the progressive movement,” she said. 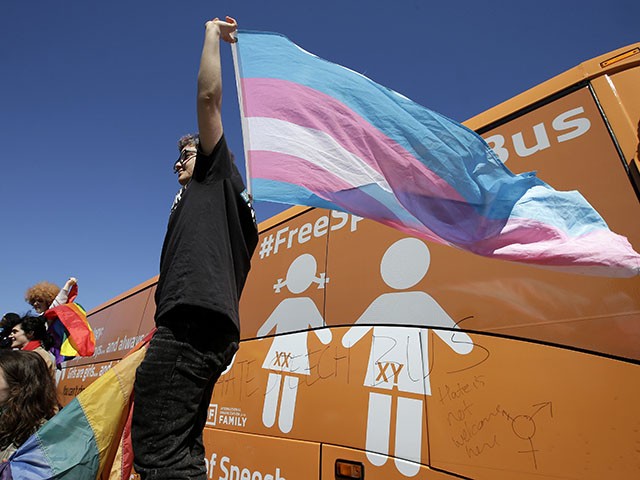 Leon Weiler, of Cambridge, MA, holds a flag while standing with other protesters in support of transgender rights beside the “Free Speech Bus,” painted with the words “boys are boys” and “girls are girls,” in the Harvard Square neighborhood of Cambridge, Thursday, March 30, 2017. (AP Photo/Steven Senne)

“They’re following a dangerous path where all of these people that they’ve applauded into the [transgender] clinic — and their parents — are going to come to them someday,” she said.

Fewer than one percent of people describe themselves as transgender, and less than ten percent undergo cosmetic surgery of the genitalia.

The movement includes masculine autogynephilic men who demand sex from lesbians, non-political people who are trying to live as idealized stereotypes of the opposite sex, and pre-pubescent children with childish views of sexuality.

It includes troubled young men who imagine themselves as promiscuous women, lesbian women trying to become men, troubled teenage girls trying to flee a toxic sexual atmosphere, gay teenagers who are pushed towards an attempted transgender identity, and young people trying to “de-transition” back to their sex.