Bolivian media recorded an attack allegedly by socialist supporters of President Evo Morales on peaceful protesters in the streets of La Paz on Thursday, occurring near “hundreds” of police officers who reportedly stood by and did nothing.

Morales has been president of Bolivia since 2006, the longest-serving head of state in the Western Hemisphere. He remains president after forcing a constitutional end to term limits through the court system in 2017 and winning the October 20 election.

Bolivians voted against an end to term limits in a 2016 national referendum.

Protests were organized in several of the nation’s largest cities on Thursday and again Friday. Protesters noted that, even disregarding the fact that the constitution banned him from running before the judicial intervention, Morales appeared to be only narrowly defeating opponent Carlos Mesa before the electoral commission abruptly shut down an electronic count. When the count resumed, Morales won decisively, preventing the constitutionally mandated run-off election that he appeared headed towards before the bizarre pause in counting.

The Bolivian newspaper El Deber published shocking footage of an assault at a protest on Facebook Thursday, taken by one of its journalists live on the scene who repeatedly stated that miners had organized to assault pro-democracy protesters on behalf of Morales.

El Deber‘s video shows a man bleeding heavily from his face and nose in broad daylight, escorted by other fellow protesters somewhere presumably safe. The journalist filming the video says, “This is how it is, this was the miners defending Evo [Morales], the miners are doing this and the police are here doing nothing.”

A woman can be heard echoing the journalist, saying, “The police aren’t doing anything!”

The journalist says there are “hundreds” of officers in the area and none appeared to be preventing the violence. The incident reportedly took place near the U.S. embassy.

By Thursday evening, police began springing into action, reportedly firing tear gas at protesters after a mostly peaceful protest (above video notwithstanding) began dispersing. The tear gas flew near the Bolivian Congress building and government headquarters.

Police activity “continued past midnight in this area, where there was a notable influx of people due to Halloween celebrations, who were surprised by the incidents,” the newspaper Jornada reported.

Despite the images from La Paz, the most violent clashes on Thursday occurred in the city of Montero, Santa Cruz state, where nearly 50 pro-democracy protesters were injured and two men, Mario Salvatierra and Marcelo Terrazas, were pronounced dead.

“Most of the injured who arrived at clinics and hospitals showed injuries produced by firearms, stab wounds, burns, and concussions,” a worker representing the city’s health network told El Deber.

The newspaper also published a video from Montero appearing to show leftists busing in supporters of Morales in anticipation of protests. A large group of members of Morales’ party, the Movement Towards Socialism (MAS, by its Spanish initials), also marched into the city, implying they were not locals.

The mining industry has traditionally supported Morales. Jornada, another Bolivian newspaper, noted that many others from the industry, however, joined farmers, college students, and others from various fields in Bolivian politics to protest in La Paz, Cochabamba, Trinidad, Sucre, and many other cities. The La Paz protest reportedly demanded fully new elections, including the rejection of Carlos Mesa as an opposition candidate. The Cochabamba protesters also reportedly chanted, “Neither Mesa nor Evo Morales.” 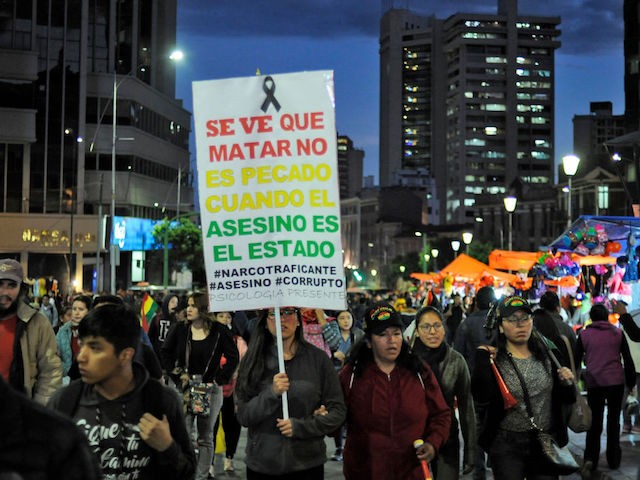 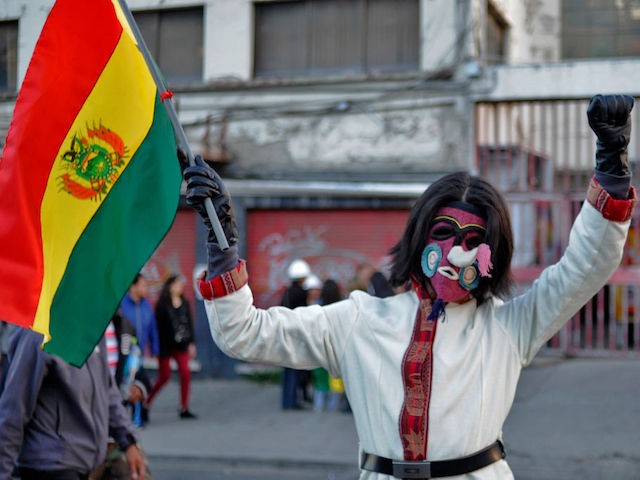 A masked woman with a Bolivian national flag takes part in an open forum summoned by the National Committee in Defense of Democracy (CONADE) on the second week of civic strike against the results of the October 20 election in La Paz on October 31, 2019. (JORGE BERNAL/AFP via Getty Images) 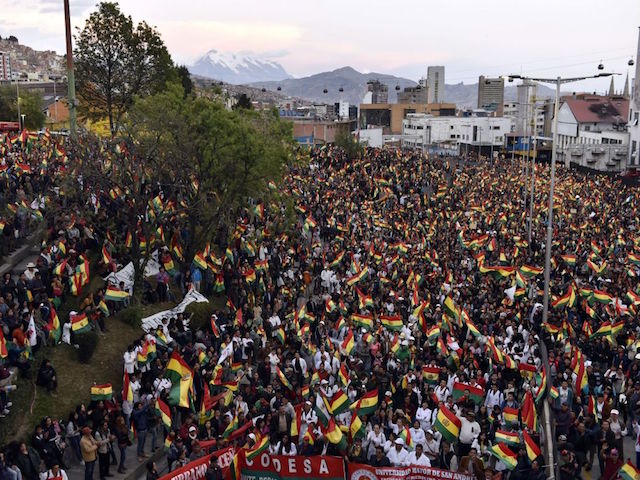 People take part in an open forum summoned by the National Committee in Defense of Democracy (CONADE) on the second week of civic strike against the results of the October 20 election in La Paz on October 31, 2019. (AIZAR RALDES/AFP via Getty Images)

Thousands took the streets again on Friday to start the month of November in the same cities. La Paz once again saw the construction of police roadblocks to prevent greater numbers of protesters.

Morales has repeatedly referred to the protests as a “coup d’etat.” On Thursday, Morales addressed the deaths in Montero, saying he “lamented” the incidents and reaffirming that he believed his victory was an honest one.

“The worst is how they try to annul the elections. We are informed, the first coup d’etat has failed thanks to the Bolivian people,” Morales said. “Since they failed two days ago, now they are trying to convene [a protest] again.”

The Organization of American States (OAS) has contradicted Morales’ claims of a free and fair election.

“The interim OAS (Organisation of American States) mission report has identified substantial shortcomings of the electoral process, notably the unexpected interruption of the publication of the voting results, that undermine the necessary credibility and transparency,” a statement from the group a week after the vote read.

The OAS announced Thursday it had begun an audit on the election, sending “some 30 international specialists and auditors” to La Paz to find any existing evidence of fraud.