CARACAS, Venezuela – Dictator Nicolás Maduro has begun the process to formally allow for the sale of businesses stolen from their rightful owners under socialism, a move he claims necessary in the face of global sanctions on his regime.

Maduro presented the project, which he is calling the “anti-blockade” law, in late September. The “law” would expand Maduro’s power to sell businesses the government owns, many of which were once successful under private ownership but have since rotted into insolvency thanks to socialist mismanagement.

The project was introduced to the socialist regime’s illegal National Constituent Assembly for its immediate debate and approval, a last-minute act for the controversial and illegitimate parallel legislative body implemented to supersede the opposition-led legislative branch and to rewrite the constitution — something they never ended up doing.

While the regime’s media apparatus boasts – with typical vitriol for the United States – that the law will somehow help national development and human rights, the full contents of the law and its key elements have raised alarms as a sign of growing authoritarianism by the socialist regime of Venezuela. Even most die-hard leftist politicians have expressed their concerns.

Experts warn that the law will open the way to revert years of nationalization and expropriation taken during late dictator Hugo Chávez and Maduro’s rule, cataloging the law as a legal monstrosity. Many of these expropriated industries, such as agricultural supply company Agroisleña, have been run to the ground after years of socialism – to bring them back to form would require a large multi-billion dollar investment.

The ultimate goal of this law, which Maduro specifically wrote for himself, is to cheat sanctions imposed by America and other free states. By resorting to privatization, in a sense, Maduro may be implicitly accepting socialism’s failure.

On the other hand, legalizing “privatization” does not guarantee free industry. This new law can potentially be applied to privatize sectors of Venezuela’s oil industry through new oil deals with firms and other states to bypass U.S.-sanctions on Petróleos de Venezuela (PDVSA), the state-run oil company. The law stops short of letting Maduro sell PDVSA itself, as that would be unconstitutional.

“For reasons of economic and political sovereignty and national strategy, the State shall retain all shares of Petroleos de Venezuela, S.A.,” the constitution reads, so for now they’re stuck with their own mess.

The prospect of granting Maduro the ability to privatize state industries and even potentially return seized companies to their original owners has sent some of the socialist regime’s more prominent supporters into an existential ideological crisis, as they see this as a reversal of the once-celebrated socialist nationalizations and unjust expropriations. But the likeliest buyers are not the devastated and largely exiled native businessmen of Venezuela. Chinese companies have already been exerting control on the State’s CANTV telecom company, controlled by Verizon until its re-nationalization in 2007. This law can open the way for a full Chinese takeover of the main telecommunications company in Venezuela.

Another rogue state in the mix is Iran. Prior to the debut of the “anti-blockade” law, Maduro attempted to sell to the Venezuelan people as a victory the total destruction of a once-successful supermarket chain. In August, the flagship of the chain reopened under new branding: Venezuela’s first Iranian grocery. The Islamic regime had cut a deal with the socialist regime that would generate funding to help it survive its own U.S. sanctions for committing similar human rights atrocities.

Even the Communist Party of Venezuela is riled up at the prospective law – but, of course, for the wrong reasons. Rather than protest the threat to sovereignty that it represents, the communists are outraged that Maduro expects to be saved by a controlled form of “capitalism” after their socialist designs destroyed Venezuela.

The law was debated and immediately approved during the afternoon of October 8. It is slated to last as long as U.S. sanctions are in place. Several prominent members of the illegal legislative body expressed their concerns, even abstaining from voting altogether, alleging that they did not know the contents of the law at the time of its debate — as if that’d somehow absolve them from this authoritarian socialist disaster that they helped shape and nurture over the past two decades.

As critical or dissenting voices aren’t allowed in a socialist revolution, those that expressed their concerns were barred from entering and participating altogether. You’re not supposed to express your opinion if it goes against the Revolution’s. You’re supposed to raise your hand as a sign of approval, nothing more, nothing less.

The announcement of this law project was accompanied by a mandatory poll for the users of the regime’s Patria platform, a Chinese-inspired social system that controls many aspects of our lives. Users of this system – be they recipients of the regime’s meager handouts or those forced to use it to manage their scarce monthly gasoline rations – have to partake in this mandatory poll that asks for people’s opinion on the sanctions President Donald Trump imposed on the authoritarian socialist regime. 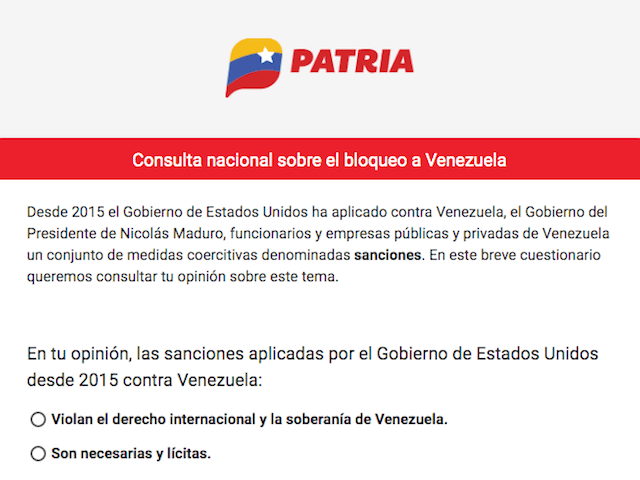 National Venezuelan survey through the Fatherland Card system asking opinion on U.S. Sanctions, October 2020. The text reads: “National Survey Regarding Blockade on Venezuela. Since 2015, the Government of the United States has applied against Venezuela, the government of President Nicolás Maduro, public and private Venezuelan officials and corporations a series of coercive measures known as ‘sanctions.’ In this brief questionnaire we would like your opinion on this topic.” The question asks: “In your opinion, the sanctions applied by the Government of the United States since 2015 towards Venezuela are A. a violation of the international rights and sovereignty of Venezuela B. necessary and appropriate.”

The poll consists of seven questions — but one must tread lightly when participating in a poll on a closed web platform managed by the socialist regime of Venezuela, where the answers you submit are tied to your name and Venezuelan ID number. Answering “incorrectly” (but with honesty) creates a huge risk to your personal safety, and quite frankly, it’s just asking for trouble.

Dangerous precedents, such as the infamous Tascon List, exist and its consequences still echo to this day for many living down here. The Tascon List is a database of people that once gave their signature to activate a recall referendum against Hugo Chávez in 2004, a right enshrined in the very constitution that Hugo Chávez and the Fifth Republic Movement (a precursor to today’s United Socialist Party of Venezuela) established.

The data was then distributed through a controversial piece of software called “Maisanta.” To this day, people who are part of that list are fiercely discriminated against and politically blacklisted. So you can imagine what would happen if one were to say that you agree with the U.S. sanctions in the mentioned poll. Going on trial for treason for “promoting” sanctions against the regime is a very tangible threat.

Of course, Venezuela is not the first leftist dictatorship to use this tactic. Just like the Patria system, the Chinese did it first. In 1957, Mao Zedong launched the “Hundred Flowers Campaign.” Like a hundred flowers, Mao said, a hundred differing opinions make the world more interesting and beautiful. “Let a hundred flowers bloom,” Mao said, encouraging criticism of his regime. Mao rounded up and executed those who obeyed his call to dissent.

The regime has proudly boasted that over 90 percent of the poll’s participants agree with their skewed narrative that the people of Venezuela are united as a whole against America and the Trump administration’s sanctions. Similar acts of coercion have been done in the past during the Obama administration as well as to President Trump.

When word first broke of this proposed “anti-blockade” law, I had some personal concerns that they may try to add an article or two to threaten people with prison time should they take a pro-sanctions approach against the regime and its officials or for even having a pro-U.S. stance generally. The law is still being debated, so that can still be a possibility.

These personal concerns were strengthened by the fact that this upcoming law was rapidly passed by the same constituent assembly that passed an “anti-hate speech” law in 2017. I’ve tried my best to keep a low profile since then, because the danger of being arrested by the socialist regime of Venezuela for tweeting wrongthink is something I’ve been spreading the word about over the past year, something that the United Nations Human Rights Council, which Maduro’s Venezuela is a member of, noted in its latest report.

Ultimately, this impending law will end up benefiting the regime and the Socialist Party currently in charge and not the people, as they claim. Maduro’s regime is willing to privatize and hand over what’s left of the country’s industries to its friends so long as it helps keep it in power. Meanwhile, the rest of the country continues to descend into entropy, flung back to the stone age with worsening blackouts, deprived of gasoline, facing growing starvation, and still locked under a fierce coronavirus quarantine that keeps our airports and borders closed – a lockdown that continues to destroy what few “nonessential” businesses remain in the country.