Longtime Venezuelan statesman Julio Borges resigned from his position as top diplomat for President Juan Guaidó on Sunday, asserting Guaidó’s administration “should disappear completely” and the formal opposition to dictator Nicolás Maduro had established a “sort of caste” system.

Guaidó has been the legal president of Venezuela since 2019, but has failed to exercise any of the position’s powers save for appointing ambassadors and diplomats. Venezuela’s constitution allows the National Assembly, at the time led by opposition members, to replace the president when a “rupture in the diplomatic order” occurs. Maduro, a socialist dictator, lost his legal presidency that year after staging a fraudulent election.

Maduro has retained full control of the Venezuelan military and all its institutions and recently restored socialist power at the National Assembly through fraudulent elections that the establishment Venezuelan opposition participated in, with little objection from or relevance for Guaidó. 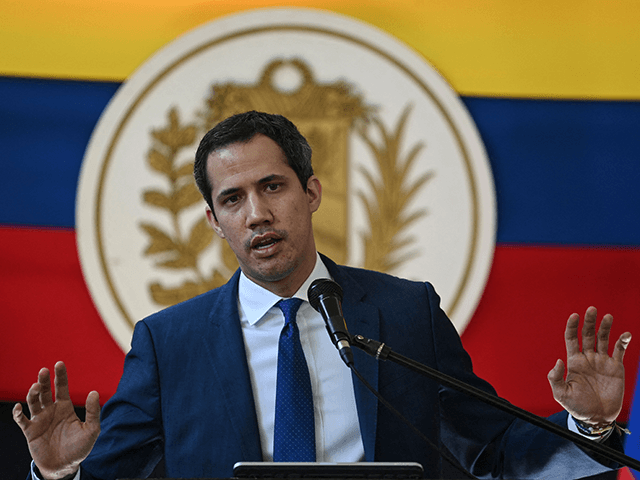 Venezuelan opposition leader Juan Guaido gestures while speaking during a press conference at the Morichal Park the day after regional and municipal elections in Caracas on November 22, 2021. (Photo by YURI CORTEZ/AFP via Getty Images)

Polls show that Guaidó has become increasingly insignificant in Venezuela and his claim to the legal position of Venezuelan head of state has waned since he has failed to organize free and fair elections to replace himself, which he vowed to do. A poll taken in July found that only 6.8 percent of Venezuelans considered Guaidó the president of Venezuela. About 88 percent said no, leaving the remainder answering that they did not know. Almost 90 percent of Venezuelans similarly answered no a question asking if the Guaidó administration “exists.”

In response to the growing disillusion with his leadership, Guaidó announced an unspecified plan to organize presidential elections shortly before Borges’ resignation.

Borges, formally the Commissioner for International Relations for the interim government of Venezuela, announced his departure in a press conference via Zoom on Sunday, condemning the Guaidó administration for failing to deliver to the Venezuelan people and for allowing underlings to engage in corruption with humanitarian aid.

“It has been three years and we find ourselves in a moment where decisions have to be made,” he told reporters. “The contradictions and lack of direction needs to disappear and there needs to be a reform process for democratic unity.”

“The interim government has deformed and become a sort of caste and an end in itself, where a space has been bureaucratized that is not fulfilling its reason to be. It needs to disappear completely,” Borges asserted. He added that “many errors and scandals” had damaged the reputation and functionality of the rival government

Borges announced he would return to the National Assembly on Tuesday and propose the formal dissolution of the Guaidó government, which would strip the leader of the title of president if passed.

In interviews on Monday, Borges asserted that the regional sham elections in Venezuela last month, in which key members of the establishment opposition participated, proves that the established opposition is not seeking Maduro’s ouster. The Democratic Unity Roundtable (MUD) – a previously defunct opposition group that prominently features members of the Socialist International, including SI Vice President Henry Ramos Allup – agreed to field candidates in the November elections despite admitting that the socialist regime would not allow free or fair voting and that the vast majority of Venezuelans, as documented by years of polling, do not support the opposition participating in sham elections. Guaidó issued statements neither supporting nor opposing participation in the elections and did not participate in Maduro-MUD negotiations, rendering him irrelevant.

The elections resulted in resounding losses for the MUD coalition and multiple incidents of socialist violence against opposition supporters.

The MUD coalition features two political parties with prominent representation that belong to the Socialist International: Ramos Allup’s Democratic Action and Popular Will, the former party of the now politically homeless Guaidó. Julio Borges is the leader of another MUD member, the Justice First party.

Guaidó’s interim government confirmed Borges’ departure in a statement that merely commented that its “Adjunct Office of Foreign Relations” would assume his responsibilities in bulk upon his departure. Guaidó has yet to comment at press time.

Borges founded the Justice First party in 2000 and spent years as a lawmaker in the National Assembly, where he faced significant violence at the hands of the Maduro regime. In 2016, violent regime thugs attacked the National Assembly in response to an attempt to organize a recall against Maduro and broke Borges’ nose, beating him and several other lawmakers with metal sticks. Ramos Allup and Guaidó, then also a lawmaker, were present and victimized by the mob.

A year later, a socialist mob seized the National Assembly headquarters and held lawmakers, including Borges, hostage for eight hours.