Judge Bruce Schroeder of the Kenosha County Court accused prosecutors of a “grave constitutional violation” in the murder trial of Kyle Rittenhouse on Wednesday morning after they tried to comment on his earlier reactions to testimony in the case.

Rittenhouse stunned observers by taking the witness stand in his own defense, something that defendants rarely do in such trials. He recalled the events of Aug. 25 last year, when he fired on members of a mob attacking him during a Black Lives Matter riot. As he began to describe the events leading to the shootings, he broke down, and the trial took a brief recess.

When Assistant District Attorney Thomas Binger began his cross-examination, he began by noting that Rittenhouse had opportunities to watch videos of the riot, and to read articles about it, during the months since his arrest. Rittenhouse said that he had seen most of the videos during the trial, and that he tried to avoid reading articles on the Internet about his case because they tended to be inaccurate. 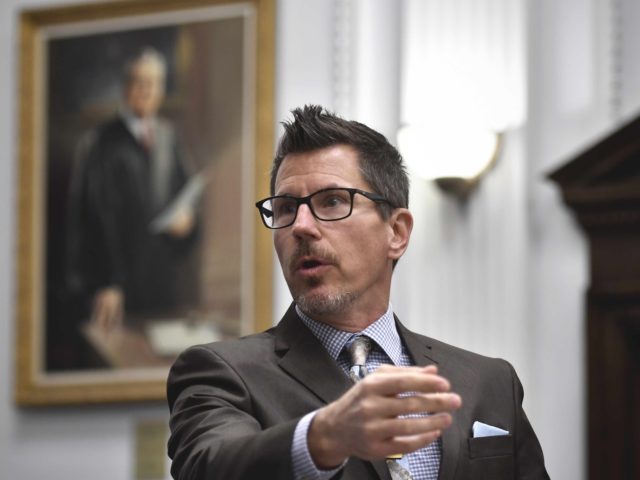 KENOSHA, WISCONSIN – NOVEMBER 04: Assistant District Attorney motions to witness Richard “Richie” McGinniss, the chief video director for The Daily Caller, as where to sit during Kyle Rittenhouse’s trial at the Kenosha County Courthouse on November 4, 2021 in Kenosha, Wisconsin. Rittenhouse is accused of shooting three demonstrators, killing two of them, during a night of unrest that erupted in Kenosha after a police officer shot Jacob Blake seven times in the back while being arrested in August 2020. Rittenhouse, from Antioch, Illinois, was 17 at the time of the shooting and armed with an assault rifle. He faces counts of felony homicide and felony attempted homicide. (Photo by Sean Krajacic-Pool/Getty Images)

At that point, the judge ordered the jury to leave the courtroom. When they had left, he berated the prosecution:

Defense attorney: Your Honor — I don’t want the jury to hear — he’s commenting on my client’s right to remain silent.

Prosecutor: No, Your Honor. I am making the point that after hearing everything int he case, now he’s tailoring his story to what has already been introduced.

Judge: The problem is, this is a grave constitutional violation for you to talk about the defendant’s silence, and that is — and you’re right on the borderline, and you may be over it. But it better stop.

Judge: This is — I can’t think of the case, the initial case on it. But this is not permitted.

The jury then returned and the defense’s objection to the prosecution’s line of questioning was sustained.

Later, Binger again asked Rittenhouse to comment on his previous comments, which had been excluded in a prior ruling, and the judge again told the jury to leave.

The defense demanded that the judge admonish the prosecution, and said that if it happened again, the defense would ask the judge to declare a mistrial with prejudice, preventing the charges from being brought again.

Judge Schroeder exploded at Binger, raising his voice, saying that Binger had entered into areas of testimony that had been ruled out, without warning.

Binger apologized, but kept insisting on responding to the judge. “Don’t get brazen with me!” the judge shouted.

He reminded Binger that he had already told him he was in danger of violating the rule against commenting on the defendant’s pre-trial silence — “which is a well-known rule!” he exclaimed.

“I’m astonished that that would have been an issue,” he continued. “So I don’t want to have another issue, as long as this case continues, is that clear?”

“It is,” Binger responded.