CARLSBAD, CA — On Monday, the door of America’s new largest seawater desalination plant opened to journalists, elected officials and the public with the lofty promise of helping to solve California’s drought distress.

On the first media tour stop of the one billion dollar plant, Carlos Riva, CEO of Poseidon Water, gave a verbal walk-through of how the facility turns ocean water into San Diego County tap water. Riva stated that the plant is “the most technologically advanced and energy efficient project of its type in the country.” 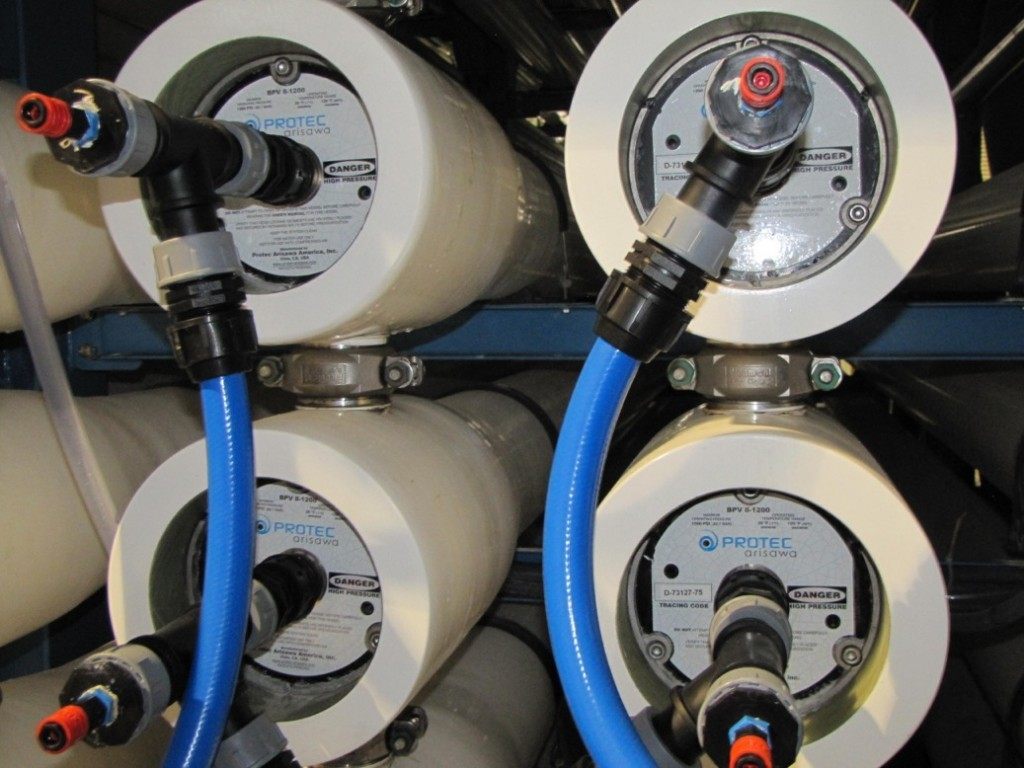 The plant is opening just as El Niño has begun to bring winter rains–and as an even more powerful phenomenon, the Pacific Decadal Oscillation (PDO), may loom on the horizon.

The new plant takes in seawater through a 72-inch pipeline to the tune of 100 million gallons a day.

Salty ocean water must first travel through two stages of pretreatment in order to remove impurities. These impure particles may include algae, tiny organisms, sand and bits of seashell. 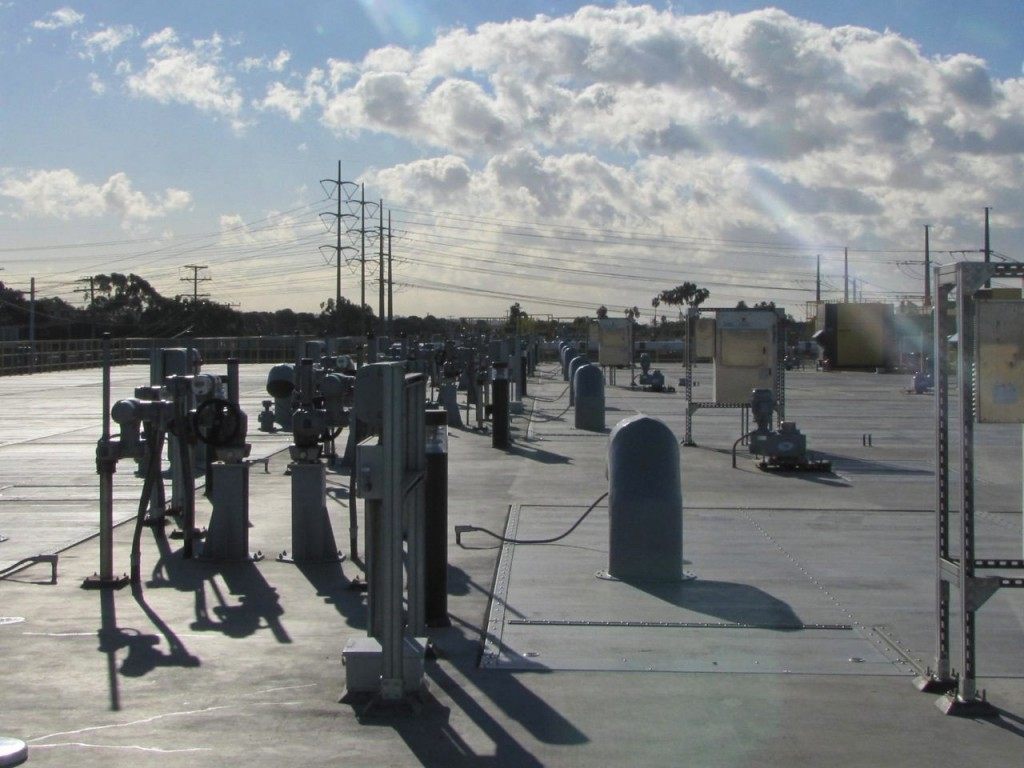 The roof of the first stage, pretreatment area at the facility (Michelle Moons/Breitbart News)

Once the water is cleared of an acceptable level of impurities it is run through the highly technical “reverse osmosis” process to remove salt from the seawater. Finally, the water intended for drinking must have minerals added back in and be disinfected with chlorine before heading out to San Diego County homes. 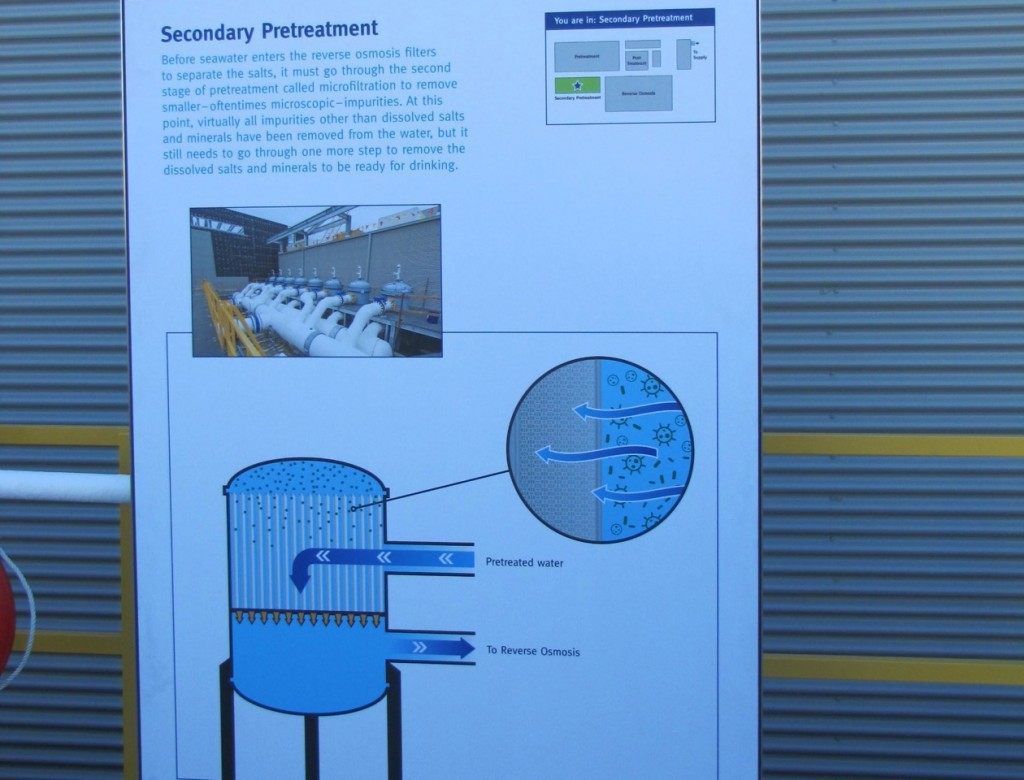 From each two gallons of seawater, one gallon of drinking water and one gallon of highly concentrated salt water or “brine” is produced. The drinking water then travels through a pipeline to the San Diego County Water Authority (SDCWA) for further treatment, and is eventually sent out to county residents. 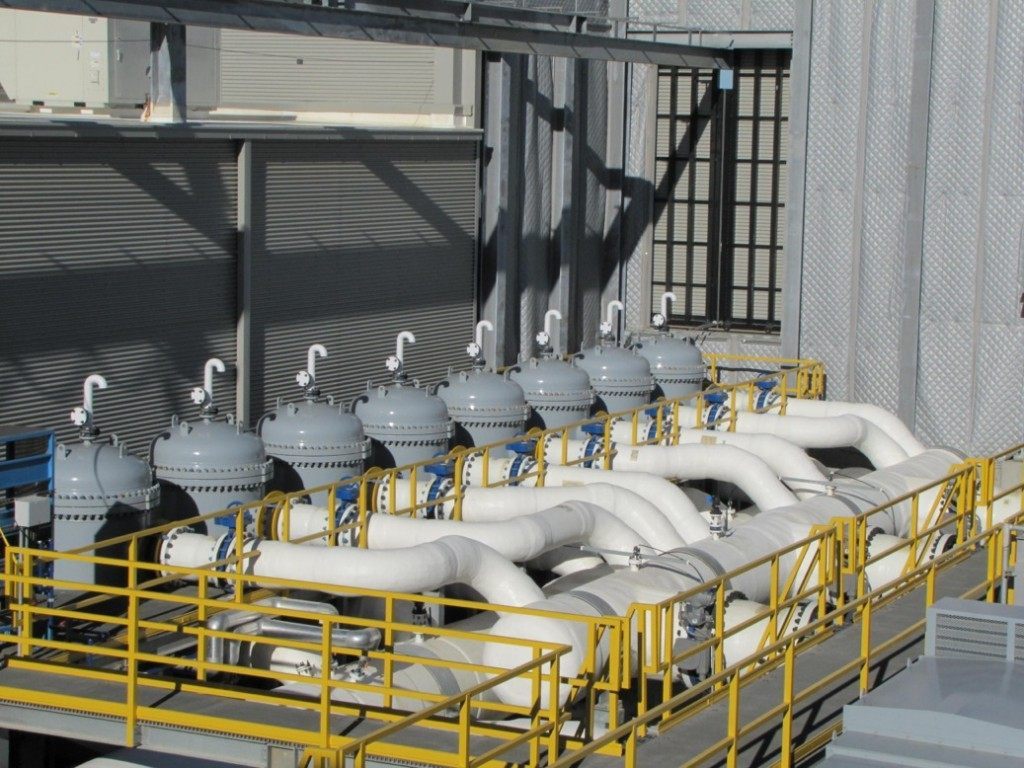 The brine portion left over at the plant is diluted with more seawater to achieve what has been deemed an acceptable level of concentration for seawater. That portion is then re-released into the ocean. 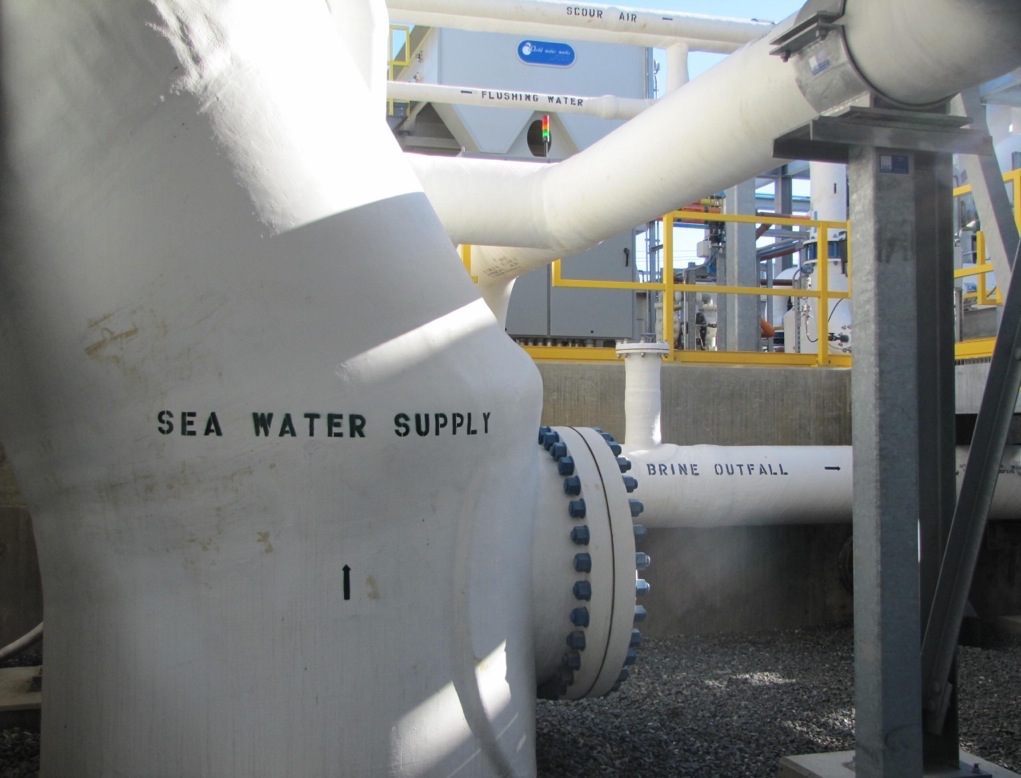 Mark Weston, Chairman of the Board of Directors for the SDCWA, reminded reporters that the Water Authority is a water wholesaler that serves the water demands of 3.2 million in San Diego County through 24 member agencies. Weston pointed back to a 1991 drought that brought the threat of 31 per cent water cuts from the Metropolitan Water District, which was then the water wholesaler . 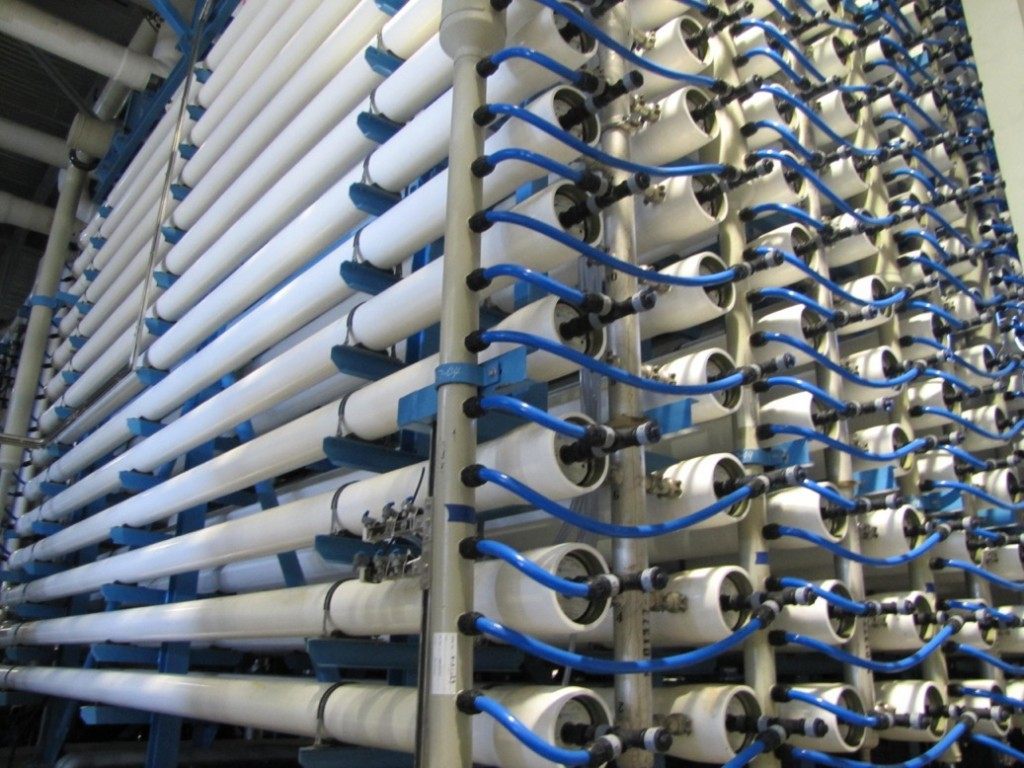 While Weston listed many sources of regular, intermittent drought in California, he did not touch upon the role of government mismanagement. These include deep restrictions on the use of water in California’s Sacramento and San Jouquin Rivers for the benefit of a three-inch baitfish, for which water intended for irrigation is being flushed out to see.

California State Assembly member Shannon Grove (R-Bakersfield) recently made a video pointing out that 1.2 million acre feet of water being flushed out to sea in 2015 alone. “That’s enough water for three million households and enough water to irrigate 600,000 acres of farmland,” Grove pointed out. 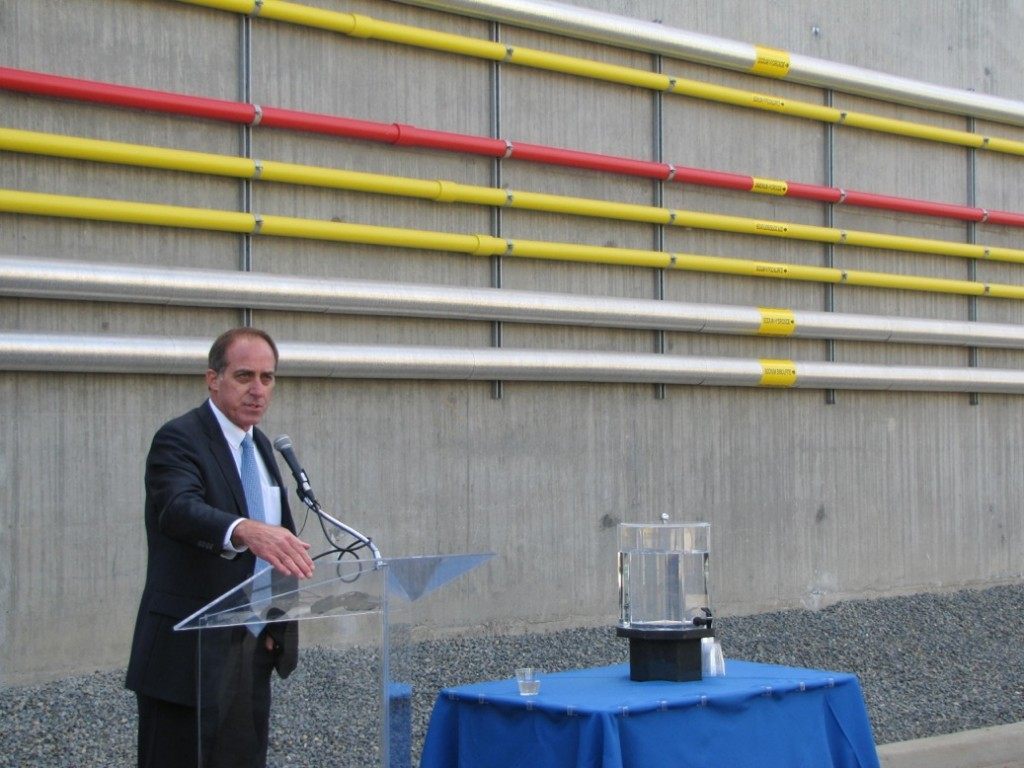 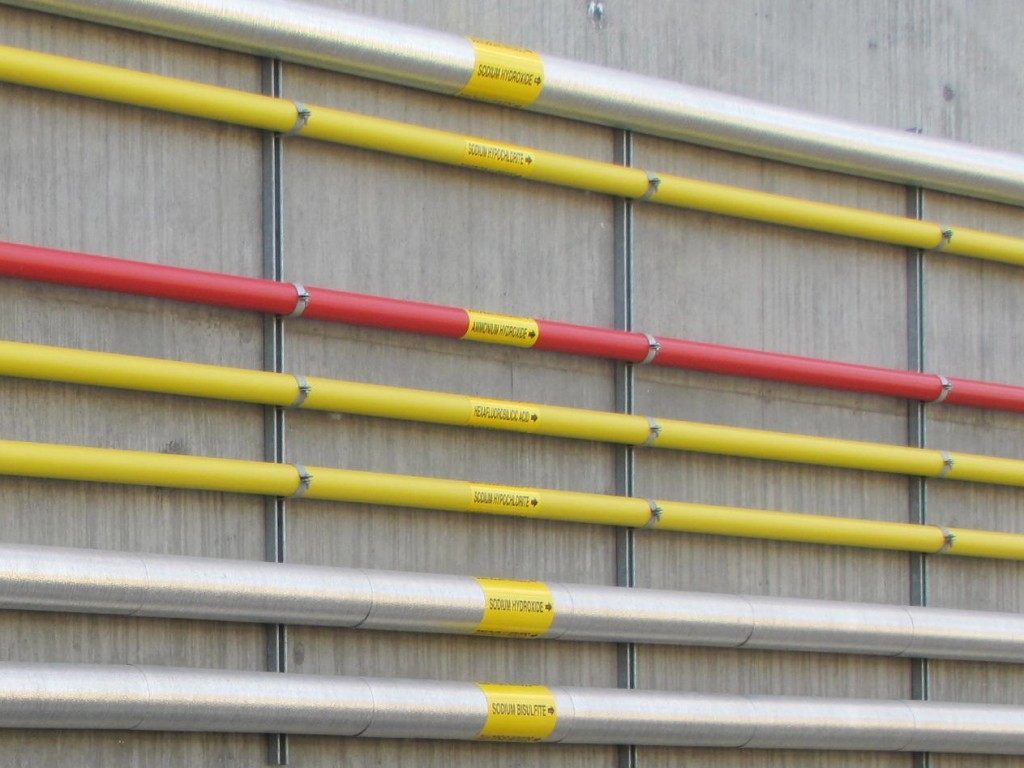 This desalination plant will provide 10% of San Diego County’s water needs, according to Poseidon and the SDCWA. Total output hovers around 50 million gallons of water per day. The day of the tour, the plant was to produce about 49 million gallons.

A diagram from the Carlsbad Desalination Project projects the plant to produce approximately 8% of the county’s water needs in the year 2020. Another 5% is expected to come from ground water, 7% recycled water, 8% local surface water, 14% All American and Coachella Canal lining, 26% from the Metropolitan Water District, and the largest portion, 38%, from the Imperial Irrigation District Transfer.